MAEJOR: HEALING THE WORLD THROUGH SOUND
By Alexandra Bonnet

Music producer, songwriter and recording artist from Detroit, Maejor is making a difference in the world through his music. Having written and produced songs for artists like Martin Garrix, Justin Bieber  and Post Malone (just to name a few), the talented singer has been part of a variety of genres. For him, it has been a true blessing and an unreal experience working with all this talent. When it came to integrating his style with theirs, the young artist shares: “I think with artists like that the producer’s job is to provide them with a canvas and get out of the way. They are naturally gifted and it’s just an honor to create with them.” Humble and kind, Maejor uses music to serve a greater purpose.

His love for creating music started at the age of sixteen when he was putting together beats on his computer. He was living in Detroit and going to school in the hood but found his connection to music; he was hooked instantly.  After all, music has played a huge part in his life and has healed him numerous times, “It’s been the greatest gift of my life and something I’m most grateful for,” he shares. From his own healing process through music, the talented artist has decided to spread this with the rest of the world through sound therapy.

But what is sound therapy? Well, as Maejor explains, sound therapy is utilizing the frequency of sound to bring us into greater harmony. It’s a science that goes back thousands of years, “I am not the creator or anything…” he shares laughingly.  Woah, that got technical. Let’s take it back a notch. So, it turns out that he stumbled upon this when looking into how he could deeper use his gifts to serve. As he started looking into it,  he fell down ‘the rabbit hole’ and then it just took off from there: “I started studying brainwaves, binaural beats, resonance, mantras – all of these really cool things related to sound and how it affects us.” Maejor found his passion and has become a mentor for those around him.

While producing and writing music is what he does, the talented and experienced artist has a bigger vision in mind: he wants to influence young teenagers who struggle with their life and finding their identity. Music is the tool to keep young teens from giving into their insecurities and frustrations and guiding them to see there is a world out there filled with light, positivity and opportunities. This also helps young professionals deal with stress and anxiety in a healthy manner. Boom, Boom, Boom; feel the rhythm of the music like you feel your heart beating. Those different frequencies bring your body, mind, and soul alive; reminding you to keep your chin up and feet moving forward.

Maejor grew up in Detroit but his family’s roots come from Jamaica which has had a strong influence on his music and being. As he expresses laughingly: “Yeamon! It influence everyting mon’.” There is a  little bit of an island vibe in his music style. As you turn on one of his songs, you can hear the work that was put into it. What makes his music making process unique is that he sets a clear intention for what kind of effect he wants his music to have on the listener-very, very intentional he emphasizes. His inspiration stems from a sound, a color, a feeling, a concept: “something to spark the interest and then the rest of the song forms around that initial gift of an idea,” as he explains.

The man in all white brings light, love and healing to those around. Maejor’s goals to help others are profound and important to him. By using his own life experiences, he can help inspire those going through similar tough times and give them some guidance. He is an advocate and spokesperson for the Cancer Research Society, teaches at APCH which is an after school program for kids in South Central and he is a music supervisor in Compton. With so much love in his heart, the artist has truly stepped into the light and into his role as spiritual guide.

There is good and there is bad in the world, but Maejor brings out only the good with his love, light, strength and positivity. He is a pure soul whose experiences have allowed him to be of better guidance for those in need. Through sound therapy, he is healing the world one day at a time and taking everyone to a higher level. On the horizon is his first project Vol 1 Frequency, in which all of the songs are composed using a=432hz. Open your mind, open your heart, and let his music heal you all the way. 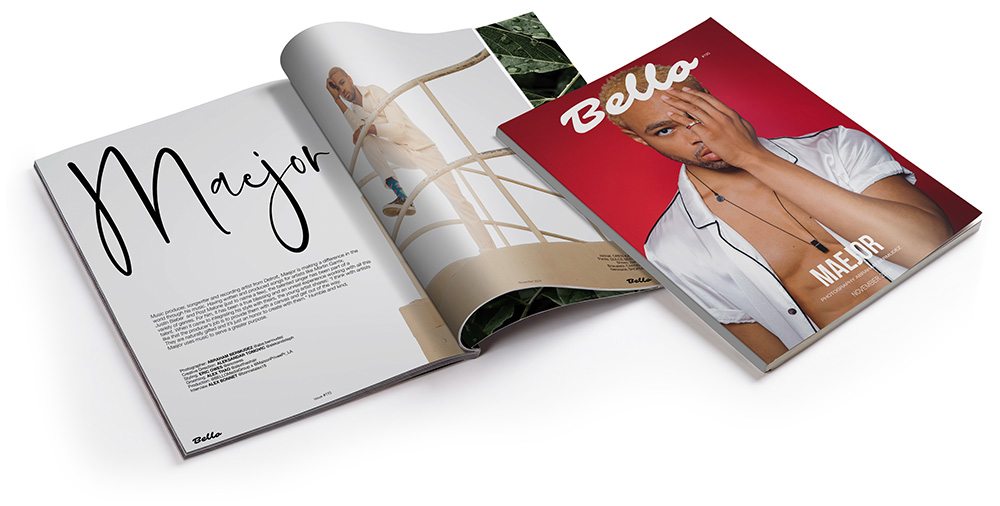