Liv Hewson is the voice of our future. They played in Santa Clarita Diet and learned a lot about themselves during that time. Using their platform to give a voice to the LGBT community, their inner light shines over and inspires many. While on the show, Hewson truly discovered who they were as an actor and got a better understanding of the industry they have gotten into. They will be playing in the highly anticipated film ‘Bombshell,’ and could not contain their excitement about it! Truly making an impact in this world, Liv Hewson continues to inspire and prosper a little more everyday.

What was it like working with Drew Barrymore on “Santa Clarita Diet?” What did you learn from this role?

I learned so much making Santa Clarita Diet. When I booked it I was still living in Australia, I’d never worked on a project that size, I still felt very new. And to be honest, I still do, but the three years we spent in that universe taught me an invaluable amount about the industry and myself as a performer. A massive part of that was Drew. Getting to know her, getting to watch her work, getting to play around with her and Tim and Skyler for three very silly and rewarding summers. I think about it very fondly.

In the recent Netflix film Let It Snow, you play Dorrie. How can you relate to this character?

Well, we’re both gay! I was also out in high school, we’re both a bit goofy. She’s probably a lot more used to snow than I am. Throughout the film, she’s searching for reciprocal care, both romantically and platonically; she’s constantly reaching out to people, asking that they meet her in the middle. I really like that about her. It’s a vulnerable thing, to put yourself out there for people. It’s very brave. She’s a bit braver than me in that regard, I think.

Dorrie’s first hookup was with a girl named Kerry who wouldn’t come out in front of her friends. What was important about this plot?

What’s important about that is that Dorrie doesn’t know. It doesn’t really occur to her that she’s being shrugged off because Kerry’s closeted, Dorrie assumes it’s because she’s not cool enough or not wanted, that it’s something personal. It’s interesting, because there’s an almost sweet naivety to that. It doesn’t even register as a possibility to Dorrie that Kerry’s not out, or might not be able to be expressive around her friends. It was important to me, too, reading the script, that Kerry isn’t punished for being closeted, by Dorrie or the narrative itself. There’s this underlying cultural idea that everyone needs to come out as soon as possible, that staying closeted is a mistake or a personal failure. I think that’s really dangerous; sometimes it’s not safe! Sometimes a person isn’t ready! Coming out can be really hard, there’s no right way to do it and it’s a process that deserves space and respect. So it was really important to me that once Dorrie understood the situation, Kerry wasn’t judged for not being out yet. She’s treated with kindness and understanding, and that’s all anyone needs, really.

Tell us about your efforts for different organizations in the LGBTQ+ community. Why is this cause important to you?

We’re living in an interesting time, to be as diplomatic as possible. I think everyone can feel that. There have been amazing strides made in advancing the rights of LGBT people, but the work isn’t anywhere near done yet. My job affords me a platform and resources, I want to make sure I’m using them in a way that’s effective and helpful. I think about what it was like for me growing up -and like, I’m 24, that was basically last week- but I was so unsure of myself, so confused by who I was and what that meant. I spent a lot of time feeling very alienated and alone. That doesn’t need to happen. And then I think about larger structural issues like housing, access to medical care, protection in the workplace. There’s things to be done, you know? I want to help.

Your next role is in the highly anticipated film Bombshell. What made you want to be a part of this project?

I remember I got the email asking me to audition and just flipped out. It was the team involved, the subject matter, the cast, I was just blindsided by it. I felt very strongly, very early, that it was going to be special. When projects like that come along I always think, “Well it doesn’t matter if I get this or not, I just can’t wait to see it.” But then I got it.

What was it like to work alongside some of the best actresses in Hollywood? How have they helped you become a better actor?

I mean, it was nuts. It was incredible. Brigette and I were already friends, so the two of us were kind of soaking up this environment together, occasionally turning to each other and going, “Is this real? Just checking this is real.” The set was a really comfortable, focused environment. Everyone came on board looking to offer and receive ideas in equal measure. We were encouraged to try things, suggest things, talk things out. It was a giving set, very thoughtful and communicative. When I think about making Bombshell, I think about care.

What do you hope fans get out of this film?

For me, it’s less about telling people what I hope they get out of it and more about asking people what they got out of it. I’m really looking forward to the conversations it will spark, partially because I think some of them will be a surprise.

What is your dream role and why?

This is a hard one because one of my favorite things about my job is the capacity it has to be surprising. I love that actors get to constantly move around and try different people on, I’m very greedy for that variety. I want to sink my teeth into as many different things as possible, and if I find something I haven’t thought of before, that’s what excites me the most. Having said that, I always wanted to play Peter Pan. I love archetypes, I love fairy stories, and I think I always saw myself in him a bit. Peter Pan was definitely a non binary touchstone for me when I was younger, even if I didn’t have words for it at the time. 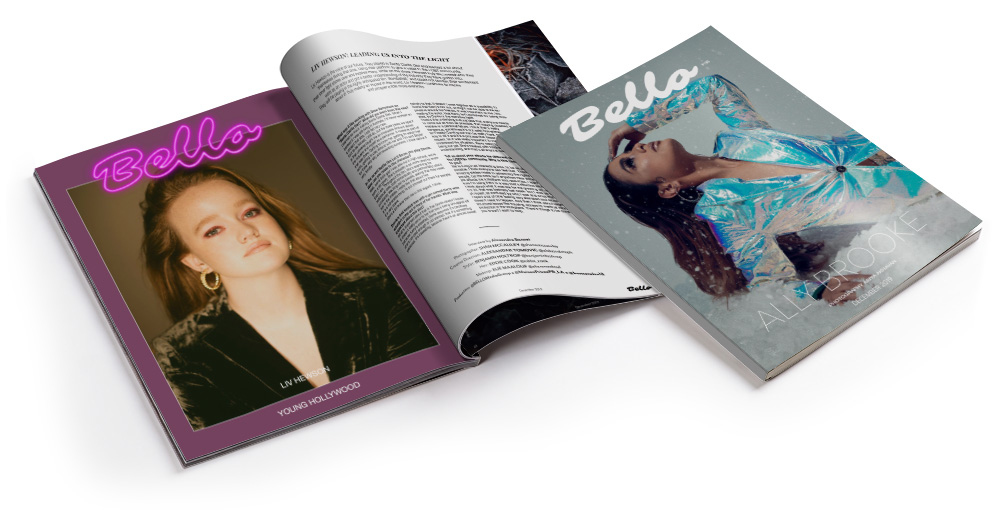