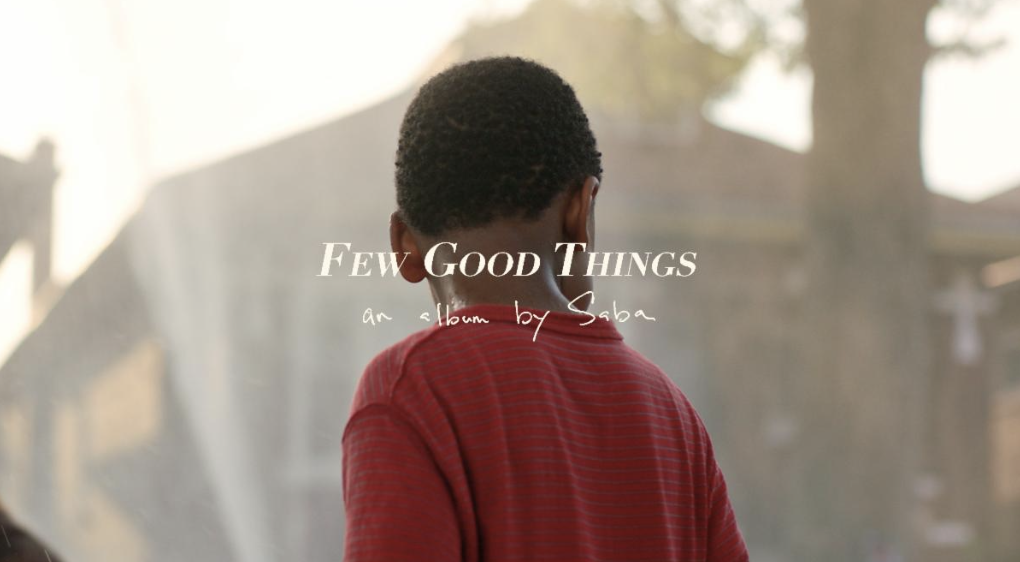 WATCH HERE
A POIGNANT FILM DIRECTED AND WRITTEN BY C.T. ROBERT;
PRODUCED BY PARTIZAN IN ASSOCIATION WITH SOUNDCLOUD
IN SUPPORT OF CHICAGO RAPPER’S CRITICALLY ACCLAIMED
FEW GOOD THINGS ALBUM OUT NOW
FEAT. PIVOT GANG, BLACK THOUGHT, KRAYZIE BONE, G HERBO, 6LACK, SMINO, MEREBA, FOUSHEÉ, BENJAMIN EARL TURNER & MORE
LISTEN HERE
Following the release of his long-awaited and critically acclaimed third studio album Few Good Things streaming now on all platforms, Chicago rapper-producer Saba has released the album’s accompanying visual Few Good Things: The Short Film. WATCH HERE.
Presented by Saba and Pivot Gang and produced by Partizan in association with SoundCloudand Pogi Studios, the poignant and touching film is directed and written by award-winning filmmaker C.T. Robert. The film explores the roots of Saba’s desire for exterior fulfillment and his recognition of the fulfillment he’s already felt by simply living a life that was meant for him with those he’s loved. Using Few Good Things as the sonic backdrop, the film weaves together a few selected tracks from the album with the collage of sounds one might expect to hear making their way through Saba’s hometown in the West Side of Chicago. The filmmakers wish to extend their personal thanks to Tommy Jeans and Therapy Studios for their contributions to the making of this film.
“The concept of ‘Few Good Things’ is the realization of self after a search for exterior fulfillment,” shares Saba. “It is the satisfaction and completeness you gain by simply living a life that is yours. Few is a small number, but few is not lonely. In the face of all adversity, a few good things is recognizing and accepting blessings. Few is to count them, one by one – an empty glass is full of air, an empty bank is full of lessons., and an empty heart is full of memories. Few good things is to grow comfortable with the empty, and despite that, finding your fullness.”
Film director C.T. Robert adds, “As a storyteller, I’ve always been drawn to stories that attempt to identify what makes us who we are. The ones that ask questions like: ‘What does having everything you need really look like?’ ‘Is it sitting at a dinner table with your loved ones?’ ‘Is it waking up next to the woman you love?’ ‘Is it having cherished memories for all of those you care for, those still in the physical and those who passed on?’”
Robert continues, “It’s hard to pinpoint the exact answers to all these but we know that it’s nothing that can be achieved from monetary fulfillment or anything materialistic. It’s a weight that can only be carried with you through years of experiences and memories made from putting the time in with those around you. No amount of money could ever replace that. In this film we want to refocus the conversation surrounding these ideas and help shed light on what’s really important in the grand scheme of it all.”
Follow Saba
Website
Instagram
Twitter
YouTube
Spotify
SoundCloud