ON: September 17, 2021 BY: Alexandra Bonnet OBSESSIONS 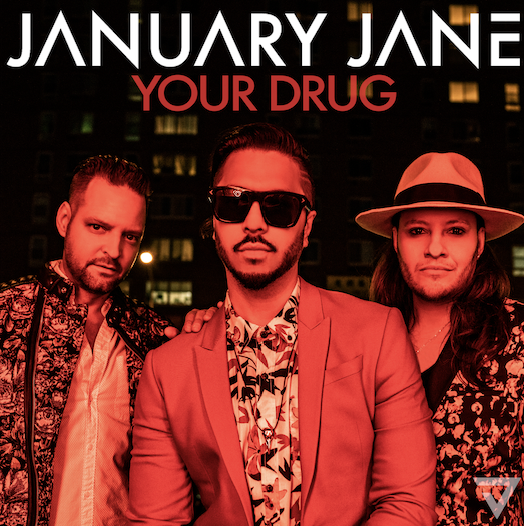 Lead vocalist/lyricist Pat Via, guitarist Mitch Mitchell, and keyboardist Peter Scialla make up the incredible trio JANUARY JANE. Today, they released their latest EP YourDrug which follows the release of many other amazing songs! Get to know the band a lil more…You won’t be disappointed…

What have you been most looking forward to about the release of Your Drug?

Pat: Playing live! We’ve all been cooped up with the quarantine, it’s going to be great to get out and play some shows and connect with an audience in-person.

Mitch: Abso-lutley! Most of what we do is really just an excuse and a vehicle for us to get onstage and connect with the audience in a live setting! So we are really jonesing to get back out there… I’m actually shaking just thinking about it!

Can you tell us more about the story behind it?

Pat: Well it’s our story of our experiences in New York City. The euphoria and dysphoria of crazy nights that never end, and how New York is a beautiful place that we would be nowhere without.

Mitch: Our music is certainly a smörgåsbord of our lived experiences in NYC… and we hope, a scrumptious and delicious representation of these events… many of which, in hindsight, seem rather insane! You can take us out of NYC, but you can’t take NYC of our music.

How did the creative process/ production go? What role do each of you play?

Pat: When writing songs, ideas can come from anywhere. A walk across the Brooklyn Bridge, seeing someone in a moment on a city street or on a train. That’s how a lot of our songs start. For roles, it was a process over a long period of time. I wrote the lyrics and some of the basic changes, Mitch came in with the guitar riffs, followed by Peter [Scialla] with the keys. Production took place from all the way back in 2017 in midtown Manhattan, then all the way full circle putting final elements in right before releasing “Versions of You”. We worked with Jamie Pitrelli and Mike and Nick Squillante as well on production.

Mitch: Ironically, while it took years to complete, “Versions of You” flowed very naturally from the beginning. There are a lot of one-takes on the final recording of that song that we kept from the original demo we did in 2017, like the guitar solo, lyrics, and a bunch of the core elements. When it feels right it usually is right. We had the unique luxury of coming back to this song with fresh ears in 2021 and buttoning everything up before the release.

When did you become a trio?

We met each other at an art gallery exhibition that a mutual friend was having in NYC. I was there actually shooting a documentary for the artist and Mitch was attending the opening and we were introduced and decided to hang out a couple days later and write a song. That song took 10 minutes to write and when stuff like that happens you kind of just know that there is a good working chemistry there so we kept writing and recording and playing shows. Then we met Peter a little later on through another friend that heard us play (that first song we had written, coincidentally) one night after going out to the bars and clubs, and he told us to, “Bring a guitar down the street, I have someone you should meet.” So Mitch grabbed his guitar and we went to Peter’s place in the Meatpacking District and ended up staying all night playing and talking music – and here we are now! When it’s right, it’s right! 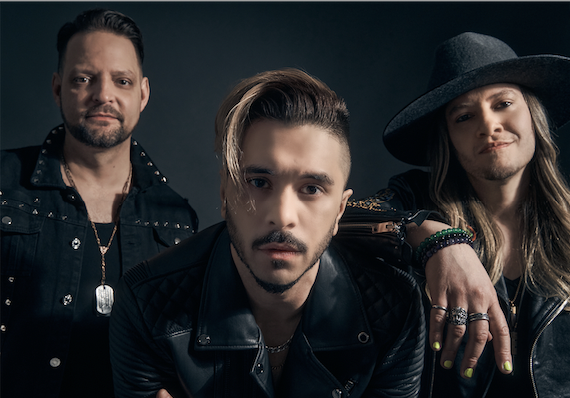 Tell us a story about a time you all had a huge “aha” moment. What was it about?

Pat: I think our story has a series of small “aha” moments that make up the collective “AHA!”, but that first song we wrote, the way we met Peter, our first sold out Gramercy show we played, meeting Matt Pinfield, signing with BMG during the pandemic – it’s been quite a journey!

Mitch: There were some “aha” moments performing in Vegas and Prague, as well, but I think the biggest – recent “EUREKA” – moment was signing with BMG while the world was still locked down… quite a surreal experience! Instead of taking time off, after SXSW, and all of our other tour dates, were cancelled (at the beginning of the pandemic) we decided to double down and work even harder… we just never stopped writing, and that seems to have been a wise decision. I think we have around 50 songs recorded now, and with BMG, our family just got a lot bigger!

What have you guys taught each other?

Pat: Patience is key, sleeping in until 9pm in Vegas is okay, and always deliver.

Who has been your biggest inspiration?

Pat: It’s hard to narrow that down to one place or person, but I would say one big inspiration is Michael Jordan off the top of my head. I’m ultra competitive, which drives me to want to win and give everything I’ve got to do that.

Mitch: Eddie Van Halen. Beyond all the well documented virtuosity and guitar genius, I love how diverse their musical catalogue was… everything from fist-pumping hard Rock, to Doo-Wop, and sometimes all in the same song, e.g., Show Your Love.

If you could spend a weekend with any artist/group, who would it be and why?

Pat: Prince, because 1) to watch his process of writing and recording (look up how he would do that, it’s intense) and 2) the parties this guy threw (look up Dave Chappelle/Charlie Murphy’s storytelling) – sounds like a weekend to me!

Mitch: I can’t use Van Halen, again, so… Elvis in Vegas… I mean, come on man! Lol

What do you hope to accomplish in the next five years as a group? Individually?

Pat: The simple answer is to be making music better than we are now, growing as artists. The hope is that time brings some success, some new fans, and hopefully some of those small gold Gramophone statues!

Mitch: Our goal, from the beginning, was to be the first band to perform on the Moon… and we’re still on track for that, within the next 5yrs… but right now, I’d settle for anywhere with gravity!

What do you hope your fans will feel when listening to Your Drug?

Pat: We hope coming out of the pandemic, that our music will help keep the party (that’s just getting started again) going! Hope to see you soon playing live!

Mitch: All the fun of a late night in New York City, with none of the hangover! Enjoy!

Other EP single, a cover of the classic Hall and Oates hit “I Can’t Go For That (No Can Do)”
stream/buy: https://januaryjane.lnk.to/ICantGoForThat
official music video: https://www.youtube.com/watch?v=7jlXm9EcWiQ