Black Eyed Peas Are Back Thanks To LIVENow!

ON: September 17, 2021 BY: Alexandra Bonnet OBSESSIONS 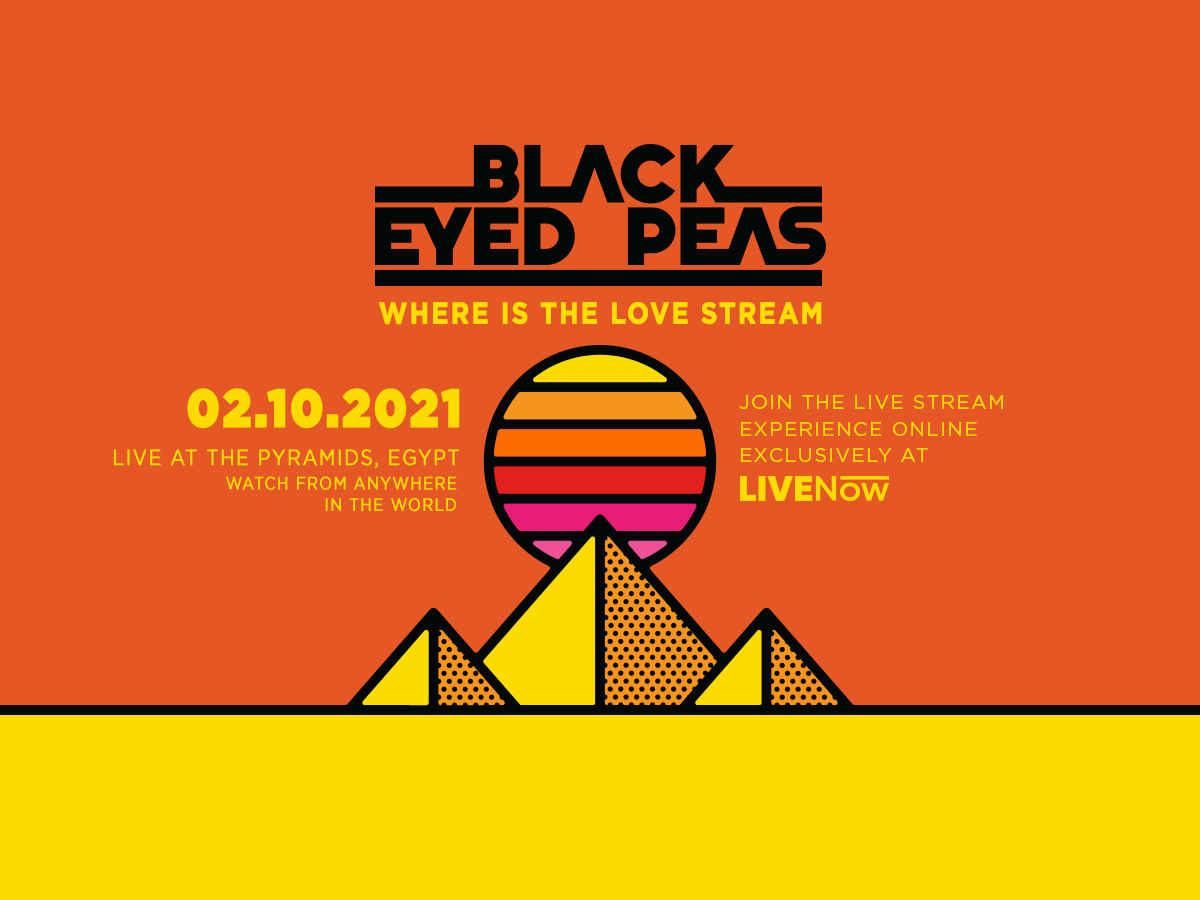 WHERE IS THE LOVE STREAM

BLACK EYED PEAS LIVE FROM THE PYRAMIDS IN EGYPT

LIVENow and Robomagic Live are delighted to announce Where is the Love Stream – Black Eyed Peas, Live from the Pyramids in Egypt, a one-off concert streaming live to fans across the globe. Black Eyed Peas will be playing one of their most iconic shows to date, in one of the world’s most historic locations, for an international celebration of music, love and unity. The Pyramids in Egypt will serve as the backdrop for a special performance from the Grammy Award-winning group, which will stream live on 2nd October 2021 at 2:00PM (EST) exclusively on LIVENow. Fans can purchase Passes and VIP packages from $9.99 – $75.00 and are available from Tuesday 14th September via LIVENow.

On the 2nd October 2021, will.i.am, apl.de.ap, Taboo and J. Rey Soul will hit the stage in front of 13,000 lucky fans to deliver a truly legendary performance, with BEP fans joining the celebration from the comfort of their homes, or on their mobile device from anywhere in the world.

“What a year it’s been, we’ve missed the stage and our fans. We’re incredibly proud to be able to perform from the Pyramids in Egypt, and also to be able to stream it live to our fans across the world. We know everyone has missed live music as much as we have, so we are looking forward to celebrating and dancing with you, wherever you are in the world.” – will.i.am

With a career spanning more than 25 years, Black Eyed Peas are one of the most successful groups of our generation. 35 million album sales, 9 international number one singles, 6 Grammy

Award wins, and a catalogue of hits old and new, they are undoubtedly one of the biggest acts of this era.

From early hits like Shut Up and Let’s Get It Started, through to international megahits Boom Boom Pow and I Got A Feeling, to RITMO and all-time classic Where Is The Love?, fans can expect a huge set filled with emotion, energy and everything in between.

Passes: Where is the Love Stream – Black Eyed Peas Live From the Pyramids

Behind The Scenes Footage

Join the Black Eyed Peas on their journey to the iconic Egyptian pyramids, with exclusive never-before-seen footage exclusive to VIP and VVIP Pass holders. Follow the band as they explore Giza, and get closer to the action than ever before, with the perfect pre-show experience.

For the first time ever, fans can peek behind the curtain and tune into a live feed from the Black Eyed Peas’ personal greenroom. Get an exclusive behind-the-scenes look at the band as they prepare for their biggest show yet. Only available for VIP and VVIP Pass holders only.

A very special bespoke lithograph created just for the show, featuring the Where is the Love Stream artwork. Limited to just 200 copies, this is your only chance to own a historic piece of Black Eyed Peas memorabilia. The ultimate collector’s item.

LIVENow are leaders within the virtual event and experiences space, giving fans access to live and on-demand content across music, sports, fitness and entertainment.

Previous events on LIVENow include Yann Tiersen: Kerber – The Film, Celeste: On With The Show, Live From London, theatre production Our Little Lives: Shakespeare and Me starring Russell Brand, and an all-new four-part series, Live From Another World, featuring cutting-edge breakthrough bands. The restream of Dua Lipa:Studio 2054 is also available to watch.

Events broadcast by LIVENow include:

With every move, Black Eyed Peas dictate the rhythm of culture. Over the past 25 years, the Los Angeles trio—will.i.am, apl.de.ap, and Taboo—earned six GRAMMY® Awards and achieved sales of 35 million albums and 120 million singles across seminal releases such as Elephunk, The E.N.D., and more. One of the era’s biggest acts, they emerged as “the second best-selling artist/group of all-time for downloaded tracks,” (Nielsen) and landed on Billboard’s “Hot 100 Artists of the Decade.” In 2011, they dazzled the world with a landmark performance at the Super Bowl XLV Halftime Show.

Their eighth studio album, TRANSLATION, achieved staggering international success after its release in 2020, and features major collaborations with artists such as J Balvin, Ozuna, Maluma, Shakira, Nicky Jam, and Tyga. The album resulted in a series of chart-topping singles, including the massively successful “RITMO (Bad Boys For Life)” [feat. J Balvin] and “MAMACITA” [feat. Ozuna and J.Rey Soul], both of which achieved #1 status on three Billboard Charts each, numerous award nominations, and gold, platinum, and diamond certifications globally. The knockout album single from December 2020, “GIRL LIKE ME” [feat. Shakira] continued this streak; the track achieved success on Latin and Top 40 radio, and was the subject of a viral TikTok challenge in late 2020. The success of TRANSLATION continues to demonstrate Black Eyed Peas’ ability to reinvent themselves along with the ceaseless changing of the times.