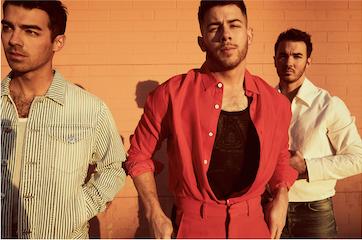 The Jo-Bros are taking their talents to the desert.

That’s right, Nick Joe and Kevin are headed to Las Vegas where they will have a residency at Park Theater at Park MGM.

The brothers shared their excitement about the announcement on twitter. Joe tweeted, “VEGASSSSS!! Can’t wait to see you in April.” Nick wrote, “Can’t wait to bring our show to Vegas! Who’s coming??”

There was speculation the group was doing a residency before the announcement was made due to some clues fans picked up on. The brothers announced their Grammy performance with a picture of them walking on Las Vegas Boulevard. The group also released a video singing along to their new song on a car ride in Vegas.

Tickets for the residency go on sale Friday at 1 p.m. ET.