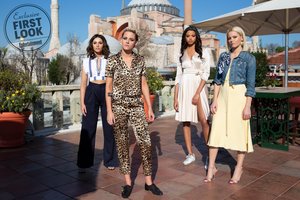 On Monday night the stars made their way to Westwood Regency Theater in LA for the premiere of the latest adaptation of Charlie’s Angels. This version stars Kristen Stewart, Naomi Scott, and Ella Balinska. The young stars were assembled by the story’s writer and co-star, Elizabeth Banks, who also walked the carpet Monday night. The angels dazzled in their red carpet looks, Stewart in a multi-colored sequin dress, Scott showing off in a black lace midi dress, and Balinska looking elegant in a beige gown. Other celebrities lined the carpet, including Laverne Cox, who makes a cameo in the film, in an unforgettable black mesh ensemble. The film itself is the latest take on the infamous franchise, the latest 2000’s version starred Cameron Diaz, Drew Barrymore, and Lucy Liu.

Elizabeth Banks and the creators definitely updated the franchise famously known to dress women in sexy clothes to fight crime. Although her original pitch was expecting the first female president, Banks takes the country’s current predicament as a good time to release this feminist movie. Naomi Scott stars as Elena, a young, awkward scientist who gets swept up into the Angel’s world when her clean energy device is stolen for evil. By her side are Sabina (Stewart) and Jane (Balinska) who help her solve the crime with their expert combat skills and strong bond to each other. With an emphasis on feminism and fashion, the film is action-packed and filled with funny moments. Charlie’s Angels doesn’t stray too far away from the core of the earlier films fans know and love, but it did get a major update that fits in with the values of society today. The newest adaptation hits the screens November 15th.