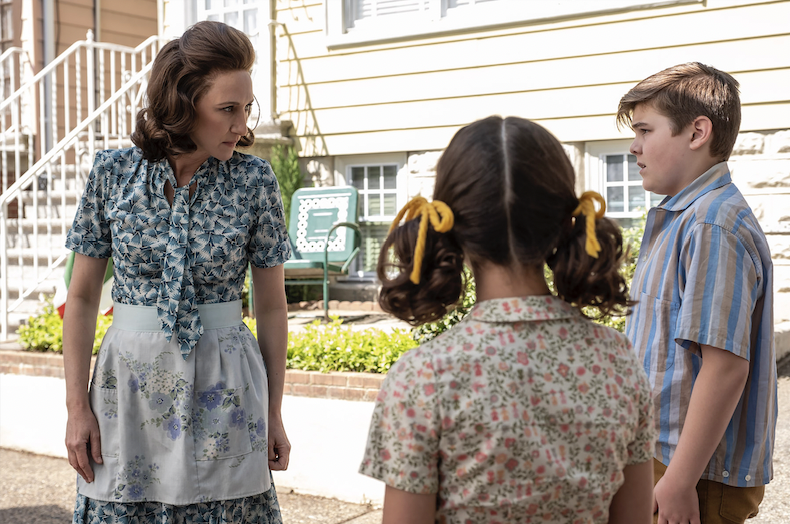 Starring as young Tony Soprano in the prequel film, The Many Saints of Newark based on the popular series, The Sopranos created by David Chase, William Ludwig spoke with us at BELLO on his time on the show and more! What a pleasure it was getting to know more about William as he is truly a bright and passionate light in this world!

The audition process was a little mysterious at first – I got a few scenes for “Untitled New Jersey Project” and the character description said, “Michael Gandolfini look alike”. My parents, who are Sopranos fans, had just heard that Michael had been cast as Tony Soprano in a Soprano’s prequel movie, so we put it all together pretty quickly. It seemed completely unlikely that I would be cast in this incredible role, but I looked enough like Michael and I’m always up for an awesome audition, so I just went for it! I worked really hard to prep the scenes, including trying out a bit of New Jersey Italian accent and watching a few episodes of The Sopranos with my Dad to get a feel for Tony’s mannerisms (he fast-forwarded through the Bada Bing scenes).

I was both nervous and excited for the audition. It was a unique experience – the casting director, Deborah Dion, spent a lot of time with me going through the scenes, giving me direction, and having conversations with me. It was much more in-depth than any other audition I’ve been on. Afterward, she came out into the lobby to talk to my mom, which absolutely never happens. It made me feel like I had a chance! After two very long weeks of waiting (and starting to think I didn’t get it), we got the call that I was on their short list – I couldn’t believe it!

How did it feel when you first found out you were casted as young Tony Soprano?

It was the most incredible feeling! It happened like this … When I found out I got cast in The Many Saints of Newark, I was just sitting at my desk after school, doing some math homework, when my mom comes in with a letter that she hands me … while also taking a video (suspicious!). I opened it and the letter it read, “Congratulations, William! You booked the role of Young Tony Soprano in The Many Saints of Newark! We are so f#$@ing proud of you!” I laughed. I cried. We ordered sushi to celebrate.

How familiar were you with The Sopranos before shooting?

The show ended the year I was born, if you can believe it, so I hadn’t had much knowledge of the Sopranos. I knew it was this big TV Show, but I didn’t really understand the significance of it until I got the audition for it. I watched a few episodes of The Sopranos with my dad to prepare for the audition and to get a sense of the mannerisms of Tony. After I booked it, I watched the whole first season of the Sopranos and a few other key episodes throughout the series. 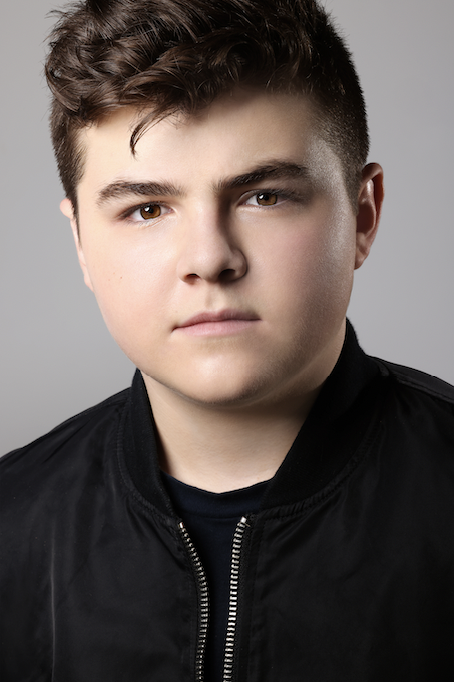 What was it like working with a dialect coach?

It was fantastic working with the dialect coach, Kohli Calhoun. I don’t know what I would have done without Kholi there to help me with the accent. She really helped me a ton and was such a positive and kind presence while shooting and practicing – so happy and funny. She taught me how to circle my lips to help enforce the accent and scrunch up my nose to sound a bit more nasal. She recorded word lists for me to practice with – to really try to feel natural with the accent. The most fun part of all of this was practicing for this one scene in which I say the F-word at least a dozen times … she said it was important that it feel really natural, like I say it all the time with my friends. She instructed me to walk through my house, pointing at everyday objects and say “F-ing couch! F-ing table! F-ing dog!” My parents did not

love this part of my dialect coaching, but my little brother Jackson thought it was awesome! And all the practice must’ve worked, because when we were shooting the scene, David Chase (the writer), came up to me and added one more F-word to my dialog … proud moment for me

How else did you prepare for this role?

It was really important to me that I be incredibly prepared for this role. I had started to really understand the significance of the role of Tony Soprano – how important The Sopranos is to so many fans, how big of a deal this was for both the writer, David Chase, and the personal aspect for Michael Gandolfini, stepping into his dad’s shoes as the older Teenage Tony Soprano. I also knew I was going to be one of the only kids in the cast and working with all of these very experienced and accomplished actors, so I figured I had better come ready to play.

To do that, I started by watching more of The Sopranos with my parents (still no Bada Bing scenes!) – all of the first season and some select significant episodes from other seasons. And I worked with my acting coaches to nail down all of my scenes.

Alessandro Nivola also reached out to me and spent a lot of time with me talking about the significance of the Dickie / Tony relationship. How Tony feels about Dickie, why Dickie shows interest in him, and how that’s important to the story of the movie, as well as setting up the future relationship between Tony and Dickie’s son, Christopher, in the series.

Did anyone from the cast serve as a mentor to you?

I was lucky to end up having several different mentors on set.

Michael and Alessandro helped me get down the understanding of Tony and his relationship with those around him. How he treats them and how he plays with them.

And the director, Alan Taylor was so kind to me and really helped me understand the importance of how I played young Tony – his innocence and how he just wants to be a kid and have people love him. He showed me a lot of what it means to be a great director. He did such an amazing job of bringing all of the cast and crew together and allowing all of these creative minds work and bring ideas to the table. I was blown away by his talent of getting people to do what he wants! He is such a kind man and a wonderful person to work with.

Also, Ray Liotta gave me a really valuable piece of advice one day. He told me that we actors shouldn’t take ourselves too seriously. Sure, we have this incredible job that we love to do, but we aren’t so special. We’re just like everyone else – we just we get to dress and play pretend as a job. He said we should have fun with it and be grateful for what we have.

Michael reached out immediately after I was cast and had a conversation with me about Tony and who he is as a character and how he truly is deep down just a sweet kid who wants to be loved. Michael was generous and kind enough to call Tony “our character” from the very beginning which really meant a lot to me because I know how much this character means to him and his family. Michael also recorded my lines in his Italian accent so I could practice sounding like him so our character would be consistent. He

also helped me embody Tony a little bit more, explaining how our Tony is a lot more innocent than the Tony in the show because we haven’t experienced everything we’re going to experience yet. Michael is one of the sweetest humans you’ll ever encounter. He would take my mom and I out for ice cream on our off-days and really embraced me with the whole cast.

What were some key takeaways from filming?

I got a lot of understanding for what goes on behind the scenes of a movie. There are hundreds of people and moving parts working together at once to get even one shot. It was really impressive to me and made me understand that the actors are just a piece of this big pie – the script, the sets, the props, the lighting – all of the details are so important. It put everything in perspective for me and I thought it was a really cool thing to experience.

What is one of your favorite scenes and why?

One of my favorite scenes is the opening scene with Tony and Dickie on the pier. There were 250 extras on set that day and they were all decked out in these amazing suits and dresses from the 1960s and it blew me away how everything was just transformed into the olden days. It was like being in a time machine. I loved it. Also, being in that scene with Alessandro Nivola, Ray Liotta, and Michela DiRossi was unbelievable.

What was it like working with such a star-studded cast?

It was so amazing being able to watch and learn these amazing actor’s methods, like how Alessandro Nivola would be in the mood of his character the whole day and his ability to switch his mood from scene to scene. It was so cool to watch him do that.

Having Jon Bernthal and Vera Farmiga as my parents was super cool – their intensity and focus on set was inspiring. And they were also really nice – Mattea Conforti, who plays Young Janice, and I taught Vera how to “hit the whoa” one day on set … and she wasn’t bad at it!

Last but not least, Leslie Odom Jr. – I hadn’t met him on set but when I saw the movie for the first time, I was blown away by his performance. He did an incredible job becoming Harold McBrayer and embracing that character. When I finally met him at the premiere, he told me that I was great in the movie (augh!) and I immediately said it right back at him.

What got you into acting?

I’ve wanted to be an actor since preschool. A friend of mine was in a Halloween commercial and I thought it was the coolest thing ever. I asked my parents if I could start doing that kind of thing, too, but they weren’t so sure about the whole “kid actor” thing, but they acknowledged my love for it so they’d let me do camps and extracurricular activities involving acting. The director of one camp I went to recognized my love for acting and offered to set me up with an audition with an agent. My parents agreed it was an opportunity I shouldn’t pass up, so they let me do it – the agent signed me and I spent several years auditioning without booking anything … then I had the chance to audition for this – it’s been amazing.

Do you have anything coming up?

Right now I’m filming an episode for a Nickelodeon show called Side Hustle and funny enough, I play a mobster on that too!

Also working on being a high school freshman and all of the math that requires!

Photographer Kenneth Dolin
Still from the film by Barry Wetcher