Everyone loves a good story right? What if that story was told with so much passion and love that it could be felt through every word expressed? The kind of storytelling that leaves you pondering for days after. To be such a storyteller takes passion and Wyatt Oleff has got it. At a young age, Wyatt has already found his love and devotion in painting stories whether it be in front or behind the camera. As he puts it, “I think as an actor, I want to tell those stories and when you pull that off, there’s no other feeling like it.”

In debuting his acting career, Wyatt kicked off with two huge films: IT and Guardians of the Galaxy. He shared with us his thoughts and feelings on being part of such groundbreaking movies: “I don’t really see them in that big of a way. I just kind of see them as projects and I don’t judge projects on how big or small they are. I judge them by how interesting they are and I think both of them turned out to be amazing projects and I’m just glad to be a part of them.” We dove more into his role as Stanley on IT and what it was like working on the beloved horror film.

Being on set of IT was an amazing experience for Wyatt from the story telling to forming relationships with the cast and crew. For the young actor, what truly impacted him were the people and getting to work on this amazing project together. Happy flashbacks flooded Wyatt’s thoughts as he recalled his time on set: “Especially on IT, our friendship speaks for itself. It’s just those opportunities to meet the same people who share the same passion I do and I can ask for nothing more.” When watching the film, the bond between the different cast members is truly felt, making the experience all the more powerful for the audience. A warm juxtaposition to the dark imagery displayed throughout the film.

After all, the young cast on the first IT were still kicking off their careers and found themselves partaking in this giant project which felt “a lot like summer camp but you’re making a movie.” Their time together was spent mainly messing around with each other which remained the same in IT Chapter 2 even with bigger names like Jessica Chastain, Bill Hader, and Chris Patt. As Wyatt shares: “You would think that we would be a little nervous or at least me but there kind of wasn’t any of that because we all got along so well. Everyone acted like their younger counterparts really similarly  so given how similar to the kids they were, it was easy to talk to them and it was just really great.”

But how does one prepare themselves for a horror movie? Given that the first movie takes place in the 80s, a lot of preparation was needed in order to completely immerse into that decade and that’s exactly what the young cast did. Their acting coach, Benjamin Perkins, gave them multiple packets about the 80’s culture from the lingo to the music and movies of that time. Wyatt found his own technique as well: “Personally, I made a playlist with a lot of 80s songs I think Stanley would listen to–it’s actually on Spotify: Stanley’s 80s Tracks. I fell asleep to it every night. I think the song that most relates to Stanley is ‘Forever Young’.”

Now, for the horror parts of the story, Wyatt admits it was a pretty scary experience especially when the scenes moved more into the sewer scenes: “I remember we were on the set for the first time and they let us wander around. We were just walking in the little tunnels and got lost with each other, it was really scary.” Whenever ACTION was yelled, Bill Skarsgård, who plays the infamous character of Pennywise would get into character in such a way, amazing Wyatt: “He’s absolutely incredible and when he’s getting ready and stuff it’s scary dude, he’s amazing.”

The IT cast was honored with the 2018 MTV Movie and TV Award for best on screen team and for Wyatt, it was one crazy experience: “It was nerve wracking but really accomplishing at the same time and we are just happy that a lot of people liked what we made during that really special summer.” Being an actor and storyteller, this meant a lot for the actor as he himself saw the passion behind the final project making it all the more special–something he hopes to accomplish himself.

With his whole life and career ahead of him, Wyatt is faced with many doors which could lead him anywhere and as he continues his journey as an actor, he also wishes to direct. A few weeks prior, he co-directed a short horror film in New York called Writer’s Block–a project they will submit to festivals. He also has a Youtube Channel with which he gets creative and loves working with people, telling them what he wants more out of them and more. Directing film is something he holds dear to his heart as a storyteller, inspired by Taika Waititi, a man who has made many movies. As the young actor outs it: “I want to tell every type of story there is. There are so many opportunities and ideas that you can express in this world and I really want to capitalize on that, tell all sorts of stories.”

Figuring out his path just as he does with his vast collection of Rubik’s cubes, Wyatt is slowly setting up the blocks that allow him to be the best storyteller he can be whether it is in front or behind the camera. Passion and dedication: Wyatt Oleff has all the ingredients to fulfilling his destiny as a “teller of tales”. 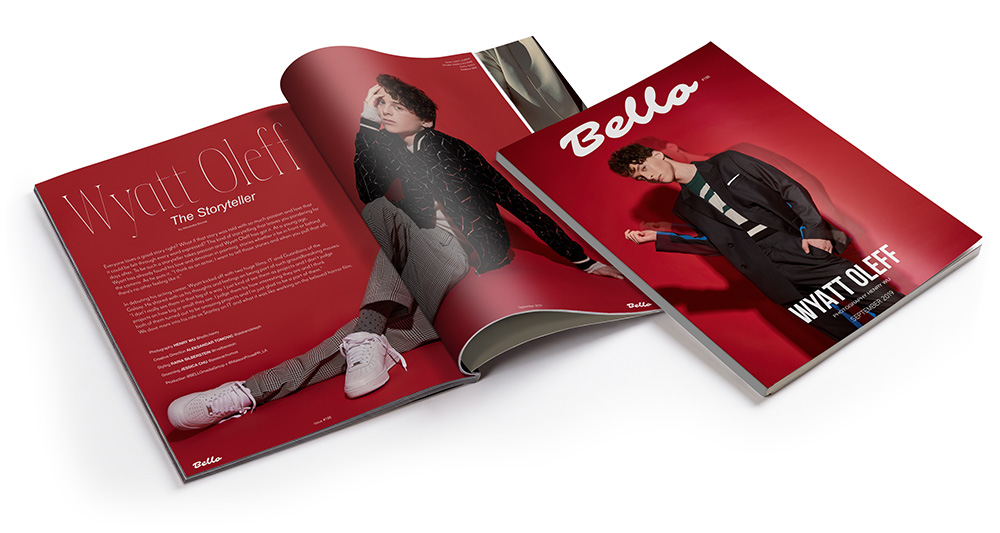 One thought on “Wyatt Oleff”