Sprayground’s “rebel backpack,” truly speaks for itself. There is nothing strategic nor simple about it. The theme alone is to branch out and to be the weird kid. David Ben David, the genius behind the fashion label, couldn’t have said it better himself: “We love weird.” This idea stemmed from the time he was walking by a storefront and noticed that “first boring backpack” in the shop. It was eleven years ago and he was on a mission to find a backpack for his next trip. As he shared, “ the lightbulb went off and I was like ‘Hey, why don’t I put art on bags?’ Because they were kinda just, you know, solid, boring…really nothing. They were just for utilitarian purposes.” And that moment would begin a beautiful journey for this young creator.

His first task was to figure out where and how he would begin the process of developing his product. David spent a month in China where he went to a trade fair and visited potential factories that would bring his creation to life. The “Hello, My Name Is…” backpack was the perfect introduction to his brainchild, Sprayground. This first bag carried character and perfectly complemented the individual who wore it. It definitely did not fit into the mold of what backpacks should be like making it all the more attractive. It was made for the ‘outcasts’ of the world. As David expressed, “These kids..they’re just these outcasts. Maybe they don’t fit in, or if they do fit in, they’re just weird.” 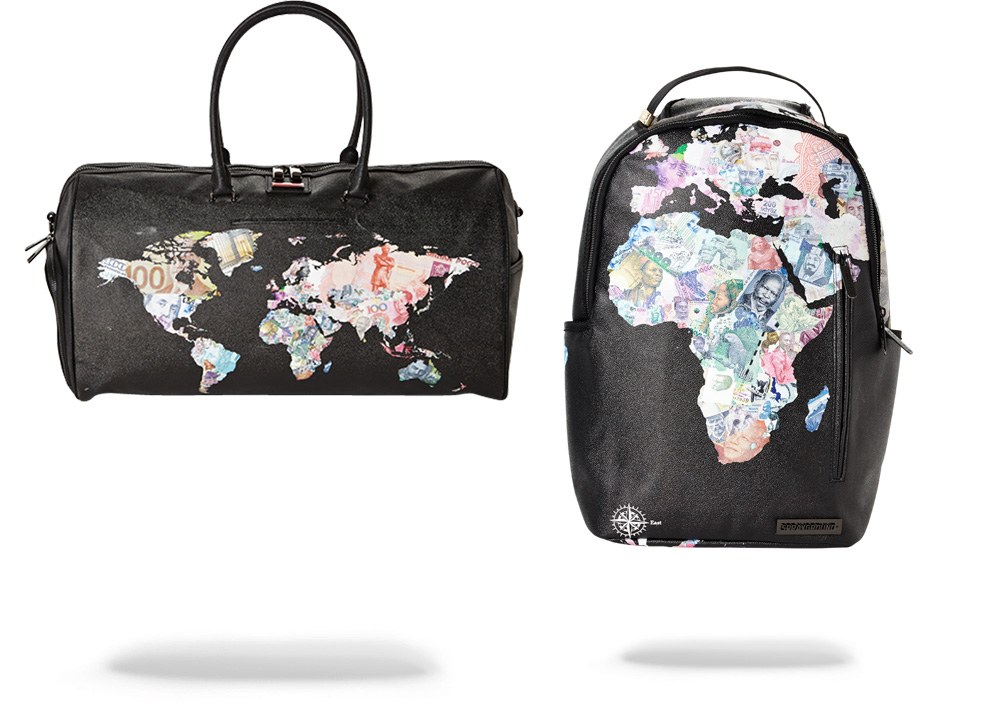 If one were to look at a Sprayground bag, they might imagine it looks like a mobile art gallery. If Kate Spade handbags and Coco Chanel clutches can be paraded around, why can’t something like a backpack? “As far as the art goes,” David explained, “it was more of what I wanted to see on bags.” His inspiration derives from other types of art: in particular music and film. He is in a continuous state of creation and innovation and as he said, “I’m just [thinking], ‘how can I reinvent the backpack? Make it different? Make it more exciting, you know?” he continued. “It’s really art. It’s art on bags, like a mobile movement.”

With the success of the backpack launch, David expanded his horizons to other accessories such as outerwear, sportswear, and luggage. For him, it wasn’t so much a next step into production than it was just another organic way of providing his design chops. As a resident of New York City, David knows the blistering cold better than anyone else: “I really just hated the winter,” he expressed. “There was just work and winter and you just have to work through it.” The inspiration and genesis for outerwear was one and the same with the backpacks. “It was just like boring outerwear jackets; like just to make winter exciting for me, let me make some outerwear, and I thought it was a good complement to the whole travel vibe.”

In addition to the outerwear, David started a musical side project: ‘Creative Outcasts.’ The decision came from the monotony of having to pick the same songs for their promo videos or campaign shoots. “We’re already making everything from A to X, why can’t we just go to Z and just finish the entire project and just make the music,” David said. The artists they worked with were local to New York City and even friends with the designer. “[It was] just about being fun and it’s really an extension of the brand, because [it] is so visually heavy.”

Visually heavy, indeed. The artwork on the various pieces isn’t static or for shock value, per say. “I like to tell a story,” David said. “I want [the buyers] to feel that they’re buying into this story.” But what kind of story is he trying to create? A story in which the characters, aka the buyers, feel like they belong and and fit in. For David, he can see his story unfold as many New Yorkers where his pieces, warming his heart a little a little more everyday. With gratitude he expressed, “Being in New York City, we see it a lot. You see young kids, older businessmen, so it was cool that, you know, it’s really appealing to so many different people. It’s really all flavors, all walks of life.”

In the last decade, Sprayground has exceeded all expectations from its first “Hello, My Name Is…” launch in 2010 to their “Fight Club” collaboration . Yes, a reference to the movie which happens to be one of David’s favorites. The film, released in 1999, recently celebrated their 20th anniversary, while Sprayground will be celebrating their 10th this year. But the collaborations (which have ranged from artist Chris Brown to filmmaker Spike Lee), isn’t the legacy that David envions Sprayground to make. Rather, it was to “make the bag important,” he shared. “People were calling it a knapsack when I first started. Then it became a thing, which is cool, looking back.”

David considers Sprayground and its creative approach to be organic. Even though he knew he wanted to work in fashion, David expressed that he “didn’t want to take the same route that everyone was making…”, he needed a different perspective. It came with that initial “lightbulb” idea for the first backpack, and the rest, as they say, is history. Reflecting on the past ten years has been quite the treat for David. “It’s just like going through all the quirky, funny, you know painful stories that you go through to build a company.” The story, as mentioned, can be told through the bag itself. “The energy that I put into the art, I guess, sits well with the fans,” David explained. “It caters to that person: that person that wants a good product and that’s looking for a story.”

Photos of the Winter collection courtesy of Sprayground.