CNCO: From Strangers to Touring The World Together

Having begun their career back in 2015, the five boys met for the first time on the set of a reality competition show “La Banda” that was produced by Simon Cowell and Ricky Martin. The show’s purpose was to put together a Latin Boy Band… “None of us knew each other before auditioning!” CNCO shared. Since then, the group’s fan base has continuously grown as they continue to release new, fun, and upbeat music that is sure to get you dancing!

Throughout quarantine, the boys had a lot of time to spend with their families during which they would listen to a lot of songs from the past, creating moments they will cherish forever.  They explained that ever since they became a band, they did not have a chance to spend time with their families as they did during lockdown. “From day 1 we were on the road for weeks or months at a time with not a lot of downtime, so that was nice.”

This quality time spent at home allowed the boys to paint a clearer picture of what they wanted to do with their music moving forward. Between the constant listening sessions of throwback songs and time to perfect their music with no distractions, the five boys had never been more inspired in their lives. This brought them to the creation of their just released album “Déjà Vu.”  As they shared with open hearts, “It was bringing us so much joy that we wanted to be able to put our CNCO twist on classic hits so our fans can enjoy with their families too.”

The album holds a special place in the boys’ hearts and they can’t wait for their fans and the world to hear it. “We put our heart and soul into this project and we are excited to share it with everyone,” they shared wholeheartedly. Hoping that people will feel good inside when listening to the album, its purpose is also to “bring a sense of nostalgia to those who have heard the original songs before.” How exciting! What better way than to get your heart pumping and smile brightening?

Truly a team effort, Christopher, Erick Brian, Joel, Richard, and Zabdiel all played a part in putting this album together. Working closely with their label and ensuring they picked the best tracks for their fans, the boys pushed themselves more than they ever have before. “Our voices are shining in a way our fans haven’t heard before,” they shared with excitement. “We definitely felt the pressure to make sure we gave these songs justice.” Oh how we can’t wait to play them all!

In the last five years, the boys have been through it all together as they found themselves on an uphill climb to success. Coming from different places and backgrounds, they have been able to learn about so much more and their perception of the world has widened as they got to know each other. After all, when you spend 24/7 with the same people, there is no denying that a strong and special bond will happen. Not only that but you may even create your own language. “For example, even though we all speak Spanish, each of the countries we’re from have different dialects and ways to say words,” they explained. One word from one country may have a completely different meaning in another country…So, “over the years we’ve blended all of our dialects together,” they said laughingly.

On top of creating lifelong bonds, the boys have also gained much recognition. But what is the secret to their success? Well, “the secret to our success is definitely communication and compromise,” they admitted. After all, just like any relationship, these two factors are key to moving forward in a positive direction. In order to reach the level they are at today, it took and continues to take much effort in listening to one another. “The more we communicate, the stronger we become.” If they could go back to the beginning of it and give each other some advice it would be pretty simple: “Enjoy every second and don’t be scared!” To anyone reading this…If you have a dream, just go for it!

Whether it be listening to music or creating it, lyrics and melodies can move a person in so many ways. For CNCO, music brings to them a feeling like no other. As they expressed with much love and passion, “there’s nothing like the rush of performing on stage, especially songs that you wrote, and having thousands of people sing it back to you.” Something I am sure many of us are eager to get back to!!

CNCO is not only a Latin boy band, it is a family that came together in the most unexpected way. Already at their five year mark, the boys have grown stronger as artists and people as they continue to take on the music industry. Learning valuable lessons along the way as well as releasing amazing new content, 2021 is bringing many exciting things…

“We have a lot in store for our fans this year after we release our album Deja Vu!
We can’t say much yet, but just know there is a lot coming.”–CNCO 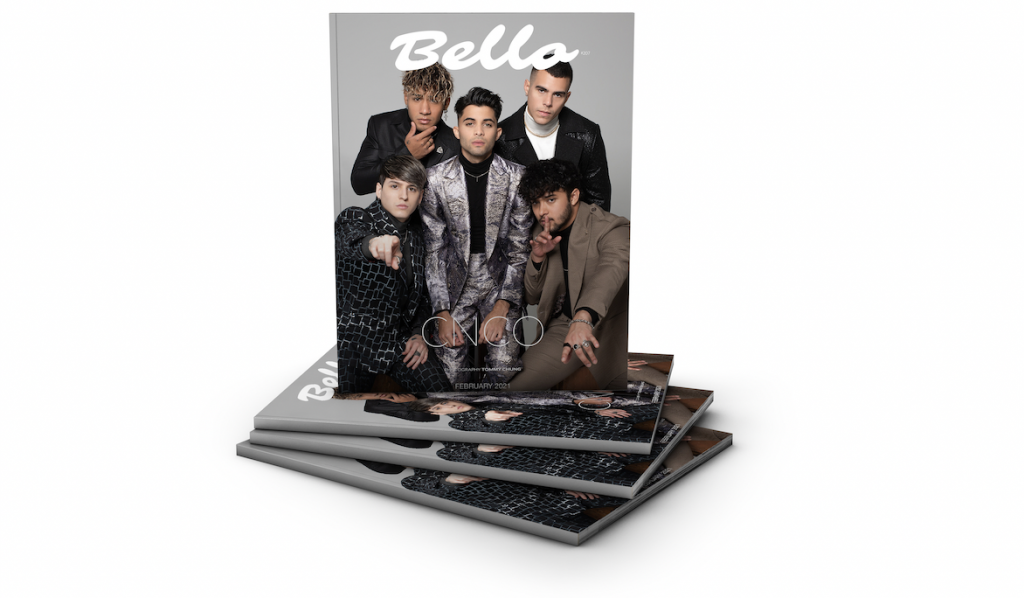 One thought on “CNCO”