Carly Chaikin, who stars in the critically acclaimed series MR.ROBOT, sat down with us at BELLO and gave us an inside look into who she is as an actress, writer, producer, and artist. Growing up, she would compose poems and write stories which represented a big part of her life, something she would carry with her until today. Her biggest inspiration to become an actress was Angelina Jolie as she watched her amazing performances! As Chaikin explains,“I have known most of my life that I wanted to be an actor and I also love producing because I love building something, creating it from the start and being able to have that input.” She never performed in plays or anything of that sort–except for one line playing a waitress in a camp performance– but all that was around her was pushing her towards who she was meant to become.

As the final season of MR.ROBOT was released on October 6th, audience’s and cast members are saddened by the thought of it coming to an end. Chaikin, who plays Eliott’s sister “Darlene”, explains how amazing this experience has been for her and what it feels like to see it coming to a finale.  “It’s so crazy being part of something that becomes part of your life, something you do every year and all of a sudden it’s done. I feel like we are ending in the best way possible and even though it’s really sad I feel like we are going out on a good note.” Despite realizing that she will never get to play the role of Darlene ever again, she shares just how incredible it was to play her character. Every season she changed and evolved. Going from very idealistic, fearless and having no concept of consequences to seeing a much more vulnerable side to her, Darlene’s character had a powerful character arc. As an actress, what better way than to explore a character and your capability of adapting and growing yourself?

In ABC’S hit show “Suburgatory,” Chaikin played “Dalia” with whom she connected in some way but unlike her role as Darlene. This role has had a strong impact on her as she found herself connecting to who she was playing more and more. Just like Darlene, the talented actress is fearless, goes for things most people think are too crazy to go for, and pushes her own limits: “I feel like I always go bull to the wall and go for my goal even if it seems crazy to everybody else,” Chaikin shares.

In 2013, she wrote “No Where to Go,” which was honored at the First Glance Film Festival. Inspired by her ex-boyfriend, this personal project was a short film in which she acted and produced and had a lot of fun making. “It was just me and the other actors and our director.” Having stepped foot in both film and television, Chaikin has experience different sides to being an actress from growing with a certain character to shooting once and having it done but then you get to play different characters at a faster pace.

As she wears different hats: actress, producer and writer, there is one more side to Chaikin which makes her a whole: painting. From oil painting to realism to dabbling in abstract, she had her first big show in New York last year. The NY Times did a piece on it and her show was up for a couple of months where she was able to share her art and also sell some! “Painting has always been my true love,” she shares passionately. During Season 2 of MR.ROBOT, she had been asked to do some artwork which found itself being printed on backpacks, shirts, and socks. This is something she will never stop doing.

Just as she does playing golf, Chaikin takes her time and experiences different levels of intensity throughout her life and career. Doing both what she loves and what she is good at: every role, every project, and every art piece is a product of what she has gone through and where she wishes to be. Pen to paper, paintbrush to blank canvass, and acting to camera, the incredible artist has big plans for her future: “There’s a lot I want to accomplish with directing too. I have a show that I wrote that I would love to make. I love directing, producing and would love to have my own production company one day. I love the creative process.”

Carly Chaikin is a creative mind who can act, write, paint, produce, and direct. Having been prepped for this since her childhood without even knowing it, it is safe to say she is headed for big things and has already made an impact in her life and world around her. Her role as Darlene may be coming to an end in MR.ROBOT, but what she learned from that experience will stay with her no matter what. Pushing her boundaries and just going for it, Chaikin has been painting her life day by day, project by project. 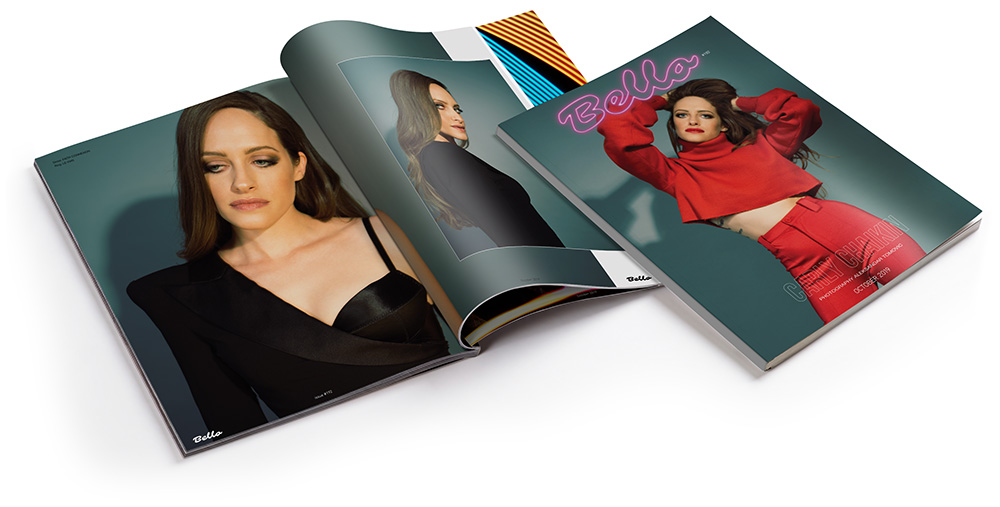