Abby Quinn on Coffee, Journaling, and Her Upcoming Projects
By Aris Pangan

If you don’t recognize Abby Quinn starring as Julianne Moore’s daughter in After the Wedding, you are sure to become familiar with her as the daughter of Paul and Jamie Buchman in the reboot of Mad About You, coming to Spectrum on November 20th. You will also spot her on the big screen in Greta Gerwig’s upcoming adaptation of Little Women alongside some of the biggest names in Hollywood including Saoirse Ronan, Emma Watson, Meryl Streep, and Timothée Chalamet. She spoke with us about her love for coffee, her experiences on set, and the magic of Meryl Streep.

There are a few projects you star in coming out such as Mad About You and Little Women. What was your favorite moment on each set?

My favorite moment on the Mad About You set so far happened on the night of our first taping. I ran out on stage for the first time and forgot my lines. Helen Hunt, who plays my mom on the show, told me that it’s good that I messed up because the audience thinks it’s funny. She turned an otherwise terrifying moment into something positive, and I think that moment really set a tone of understanding, comfortability, and ultimately, fun that I have continued to find every day on set.

My favorite memory on the set of Little Women was when I walked past Meryl Streep and nervously said hello and she said hello back. Still can’t believe that happened.

What is it like working on the follow-up to the popular 90’s sitcom Mad About You? How will it continue that original story?

It’s been a dream come true, and a great learning experience for me. I’ve never worked on a sitcom before, and it’s been really exciting to get out of my comfort zone and learn something entirely new. I play Paul and Jamie Buchaman’s daughter, Mabel, and the show picks up with Mabel heading off to NYU for her first year of college, and we get to see her parents’ first experience with being empty nesters. It makes for some pretty hilarious moments.

You also starred in the recently released film, After the Wedding. Do you think being part of the cast of the film allowed you to create an even better song for it? If yes, how so?

What did you enjoy about writing and recording “Knew You For A Moment?” What inspired you?

Bart Freundlich called me and told me that he was hoping to use one of my songs for the end of the film. After talking to him, I went home and wrote a new song from the perspective of Michelle Williams’ character, Isabel. I think what I enjoyed most is not having a plan before writing, and seeing where the process took me. I hadn’t been planning on writing from Isabel’s perspective, so it was really interesting to me when the song started taking shape in that way.

Did the singing or acting come first, or did they come together all at once?

Hmm, that is a hard question, honestly, because I always remember being really passionate about both, but if I had to choose, I would say that the singing came first because it was what I pursued first. I first pursued singing when I was in elementary school when I auditioned for my school’s production of The Wizard of Oz . I remember being so nervous for the audition, but also really excited about the possibility of singing on stage. I ended up getting the role of a munchkin, and I never really looked back. From there, I would say that it quickly became about both singing and acting for me, as I realized that I loved to do both equally.

I journal a lot, and I find that most of the time my journal entries become my lyrics. I also write a lot of notes on my phone throughout the day. And then when I’m at home with my guitar, I work on finding melodies that compliment the lyrics. My process definitely varies from song to song, sometimes I start a song and come back to it months later to finish, and other times, I’ll write a song in ten minutes. I find that I’m most inspired to write when I’m by a body of water, or surrounded by lots of trees. I’ve also written a lot of lyrics in airports.

I wake up and immediately find coffee. If I don’t drink coffee within an hour of waking up, my eyes will start to close, and I will fall back asleep. I like to wake up pretty early so that I have a good amount of time to enjoy the coffee and journal. After that, I usually workout. I like to go to yoga or do weight training. I just signed up for a beginners karate class so if all goes well, that might become a part of my routine too. If I’m not filming, I’m usually focused on auditioning. If I’m not auditioning, I like to play and listen to music, go to concerts, watch movies, rollerblade, spend time outside, and hangout with my friends and family. When I have downtime on set, I like to read. I just started ‘No Longer Human’ by Osamu Dazai, and I’m really loving it so far. My nights end with me watching a show on my computer, and DMing my sister a bunch of photos and videos that I find funny. I then set 20 alarms and go to bed.

What’s your spirit animal and why?

I think the animal I’m most like is a goat. I want to say horse, but I know in my heart that I am more like a goat. I’m very curious and independent and I love to climb. I can also be quite jumpy at times, and I would love to live in the mountains one day.

Three movies you would bring to entertain yourself on a deserted island?

Labyrinth, Grease, and Like Crazy. Honorable mention is the movie Spirit.

What would you do with a million dollars?

I would put some money aside for my family, and donate the rest of the money to organizations that I feel really passionate about, such as Planned Parenthood, The Trevor Project and the Child Mind Institute.

What will you be doing one year from today?

I’m not sure where I will be or what exactly I’ll be doing, but I hope that I’m happy, working on something that I find fulfilling and that I’m with people I love. I’m writing this on October 18th, so I’m sure that a year from now I’ll be thinking a lot about what I’ll be dressing up as for Halloween. 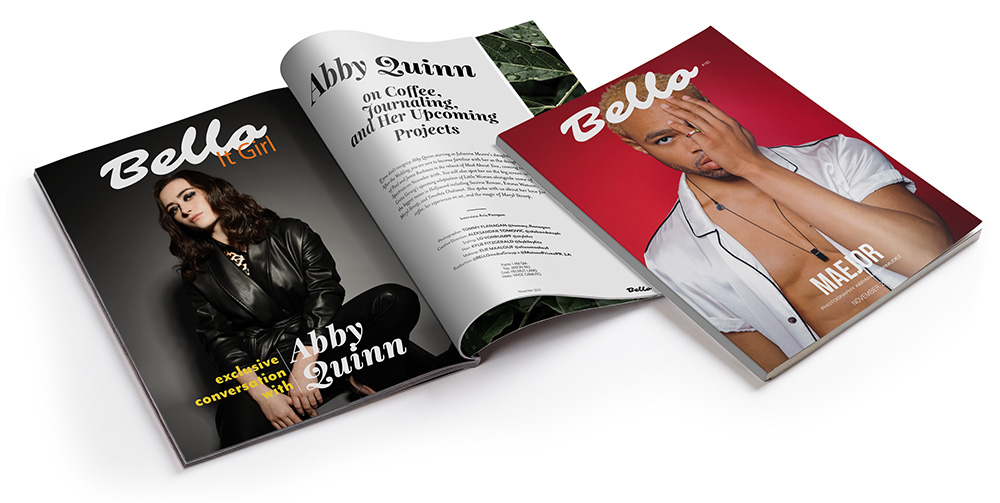 One thought on “Abby Quinn”