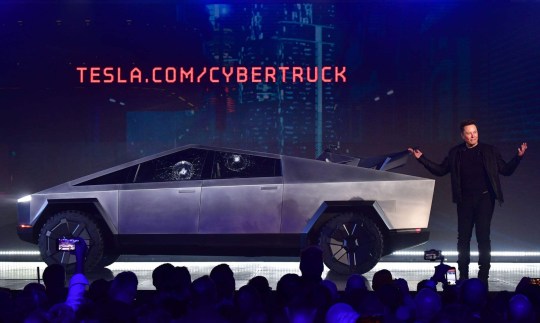 With last night quite odd unveiling of its “bulletproof” electric cybertruck, the breaking of the “armor glass” was not the only disaster we have witnessed. The all thing felt closer to an SNL sketch rather than a successful Apple like presentation that Musk’s ego is trying so hard to achieve.

Even tho Mister Musk seemed to be quite proud of his mad max toy, the all thing left me speechless. According to the reaction of the crowd, I am sure I was not the only one wondering if the car they brought on stage was a joke or the real deal. Each “breaking news announcement” that was supposed to be followed by applauses or gasps seemed to had a little bit of delay or mixed emotions.

I am not even gonna get to the performances of Musk’s latest toy, because the only captivating part really was the smashing of the “transparent Metal Glass”.

The design is absolutely ridiculous and I was kinda annoyed that the all thing was focused on how “bulletproof” this thing is. The dark side of Tesla I did not want to see and did not liked at all. I do have an issue with making things sounds like they have to adapts to guns and bullets like this is a normal thing. Kids should not have to go through shooting drills at school just like I do not want to see my car main feature to be bulletproof. I was deeply annoyed to see Musk’s proud face as he went deeper into his awkward presentation.

I get it, it is an utility truck but why does it looks like something Trump would like his border patrol agents to use?

While I first loved Tesla’s spirit and their electric cars, I am starting to doubt where exactly Mush wants to take his company? And while Tesla is surfing on the eco-friendly electric trend, we have to remind ourselves that the majority of the electricity in the US is produced by coal, and not solar energy as I believe it should be. Not so much about clean energy so far …

The car will be ready in about 2 years, just like the flying car always being just 2 years away … since 2005.

Last night just made me wish Musk would take a break to hug a puppy or two and maybe look at bunnies and rainbows rather than creating the must have vehicle of a martial law era.