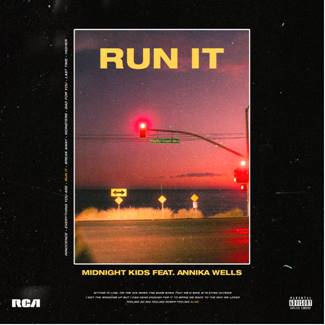 Kyle Girard and Dylan Lee of Midnight Kids are closing out

2019 with a stadium-sized single, “Run It” featuring Annika Wells, out today via RCA Records. Click HERE to listen.The free-spirited, rebellious anthem comes after a slew of festival plays by the 80s-inspired duo including Coachella on the Heineken Stage, Shaky Beats, Electric Zoo and more. Midnight Kids also hit the road this year as support to Jai Wolf, and later Loud Luxury. While “Run It” may only be the Kids’ fourth original release, they’ve already amassed tens of millions of streams and are becoming regulars on key radio platforms like SiriusXM and iHeartRadio.

Midnight Kids rally around a youthful sentiment crafted by dreamers, believers and late night rebels. In a world that prides itself on being more connected than ever, the same cannot be said about its people who tuck their fears, doubts and insecurities under the covers. Midnight Kids are rewriting the script, encouraging people to be comfortable with their story. Midnight Kids’ story began a couple years ago when Kyle Girard and Dylan Lee first met and instantly connected on a vision and sound they were both striving toward. Since then, they’ve been able put their distinct, 80s-inspired spin on official remixes for The Chainsmokers, P!nk, Gryffin and more. In June 2018, they released their debut single “Find Our Way” featuring klei, which ended up making its way onto the radio, earning the BPM Breaker on SiriusXM and more. Millions of streams later, they found their home at RCA where they continue to write their story and choose to live by a singular statement: “We are all Midnight Kids. Let’s tell our story together.”

Annika Wells is an independent LA-based singer songwriter with a passion for storytelling, an acute ear for melodies, and an unhealthy obsession with cup of noodles. Raised in Sleepy Hollow, California, she moved to Boston to attend the Berklee College of Music before dropping out to pursue music full time. Her writing credits include songs with The Jonas Brothers, BTS,Broods, Steve Aoki, and PrettyMuch, and she’s currently on a sold-out arena tour with Illenium performing their original songs. Annika is set to release her debut solo project in 2020.

Keep Up With Midnight Kids: