Lizzo Performing LIVE at Art Basel on Dec 4 (and Virtually)

ON: November 4, 2021 BY: Alexandra Bonnet OBSESSIONS 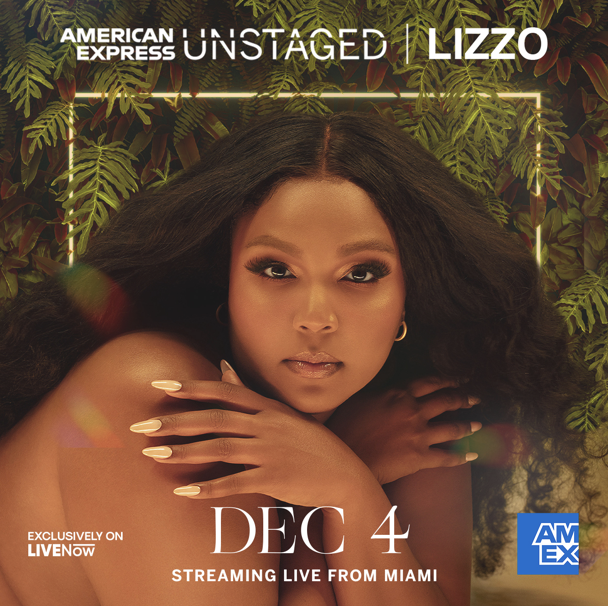 “Performing is one of the most realistic interactions of love that I get to experience with fans and to be able to close out this year with a special live American Express UNSTAGED performance for my fans all around the world is truly incredible,” said Lizzo. “Connecting authentically with my audience matters to me and I can’t wait for them to see what we have planned for this amazing performance.”

On Saturday, December 4, 2021 at 9:00 PM ET, American Express UNSTAGED with Lizzo will take place in front of a live audience and live-streamed, closing out 2021 music experiences for Card Members and fans with a one-of-a-kindpyrotechnic performance in Miami, highlighting Lizzo’s fan favorites and new songs.

“American Express worked with Lizzo in 2019 to celebrate the 50th Anniversary of Stonewall Pride in New York as well as on her “Cuz I Love You Too” tour and the response was overwhelming,” explained Brandy Sanders, Vice President, Global Entertainment Partnerships & Experiences, American Express. “Not only did we know, in that moment, that we had to work with her again but that we had to bring it to a global audience, which American Express UNSTAGED provides us the opportunity to do. It’s just another way we show our Card Members that music is better with Amex.”

American Express UNSTAGED with Lizzo will stream exclusively on live streaming platform LIVENow, and will be available to watch on demand for 48 hours to ensure fans around the world can also partake in the experience. Fans can purchase tickets and Card Members will have access to purchase exclusive packages here while supplies last*. Tickets for the livestreamed, virtual event will be made available on Wednesday, November 3, 2021 at 12:00 PM ET. Fans can also watch the American Express UNSTAGED performance with Lizzo with up to 3 friends and join a video chat together using LIVENow’s ‘Watch Together’ feature. Additionally, a limited number of Platinum Card ® Members from American Express will have an opportunity to purchase tickets to be in the audience of the performance in Miami, additional details to be released at a later date.

“LIVENow was created to bring fans closer to their favourite music artists. And for American Express UNSTAGED: Lizzo, we’ll be streaming the show live from South Beach performed in front of a live audience.  We’re very excited to power the virtual format of UNSTAGED, so a global community of music fans can experience the magic of this very special Lizzo performance from Miami.” –  Géraldine Pamphile, Global CEO OF LIVENow

*Tickets available, while supplies last. All sales are final. No refunds will be provided. Allow 8-10 weeks from show for delivery of merchandise. All fees and taxes are included in the price of the ticket. Price of the ticket is in USD. Review full terms here.

3x-GRAMMY Award winning superstar Lizzo has become a household name with well over 5 billion global streams and a Platinum selling debut album to date. Lizzo released her Nice Life Recording Company/Atlantic Records debut album CUZ I LOVE YOU on April 19th, 2019, debuting at #6 on the SoundScan/Billboard 200 albums chart and spending 24 consecutive weeks in the chart’s Top 10. “Truth Hurts” also became the longest running #1 by a solo female rap artist in history after spending seven weeks atop the charts.  With anthemic smash hits like the 7x Platinum “Truth Hurts,” the 3x Platinum “Good As Hell,” the 2x Platinum “Juice,” and the Platinum “Tempo (Feat. Missy Elliott)” already under her belt, Lizzo released yet another smash with the brand-new “Rumors.”

Since the release of the meteoric CUZ I LOVE YOU, Lizzo has been named both TIME Magazine and Entertainment Weekly’s “2019 Entertainer of the Year” as well as gracing the covers of Rolling Stone, Billboard’s GRAMMY® Preview Issue, British Vogue, Elle’s Women In Music Issue, and many others.  Additionally, Lizzo kicked off 2020 with a showstopping opening performance at the 62nd Annual GRAMMY® Awards and took home three big wins, in addition to being the most-nominated artist of the year. 2020 also saw her win the awards for “Best Female R&B/Pop Artist” at the 2020 BET Awards and both “Entertainer of the Year” and “Outstanding Video” at the 2020 NAACP Awards.  Her list of high-profile TV performances also include the 2019 American Music Awards, MTV Video Music Awards, BET Awards and Saturday Night Live, in addition to in depth profiles on CBS This Morning’s GRAMMY® primetime special and CBS Sunday Morning.

LIVENow are leaders within the virtual event and experiences space, giving fans access to live and on-demand content across music, sports and entertainment. LIVENow were recently awarded ‘Live Music Innovation of the Year (Platform)’ at the 2021 Music Week Awards and shortlisted in the ‘Best Event Platform’ category at the 2021 DigiDay Technology Awards for the landmark streams of Dua Lipa: Studio 2054, Ellie Goulding’s ‘Brightest Blue’ and Gorillaz’ ‘Song Machine Live from Kong’.

Other events on LIVENow include Black Eyed Peas – Where is the Love Stream, Celeste: On With The Show, Live From London, theatre production Our Little Lives: Shakespeare and Me starring Russell Brand, and an all-new four-part series, Live From Another World, featuring cutting-edge breakthrough bands. The re-stream of Dua Lipa: Studio 2054 is also available to watch.

Events streamed by LIVENow include: