ON: November 8, 2021 BY: Alexandra Bonnet OBSESSIONS 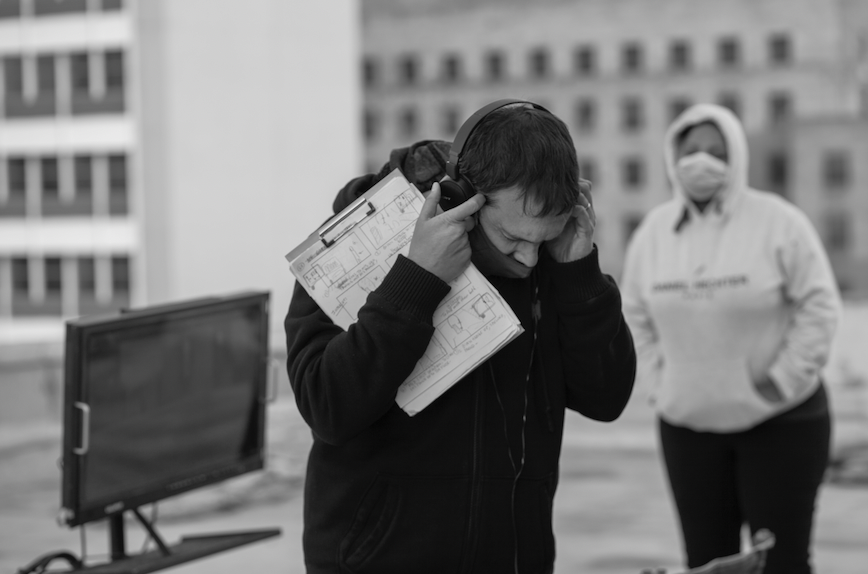 Fabien Martorell is a world director who parts his time in Los Angeles, Johannesburg, and France. Having known at a young age that he wanted to pursue a career in film, he spent his childhood free time drawing, photographing, and anything that involved art. His last film, COLLISION, a drama/thriller is visually strong and tackles important themes such as racism and freedom. Using his art and passion for the greater good, Fabien is open to the world and all it has to offer. He represents what it means to truly embrace everyone and everything as there is such beauty to be found in our differences! Enjoy!

Why did you get into cinema?

I was marked by American cinema very early on, probably even before I was 10 years old. I always knew I wanted to be a director. At a very young age until I was a teenager, I spent all my free time drawing, taking pictures and I had a passion for the history of art – everything related to the image.

What are some projects that you really liked and why?

My last film, Collision, a drama/thriller, which I just shot in Johannesburg, South Africa, with one of the biggest streamers. It is a film that is visual with strong, important themes such as racism and freedom, themes both relevant in South Africa and in the rest of the world. I also really like one of my short films, The Coin, which was shot in Los Angeles a few years ago. It was a beautiful and very inspiring story and I got the chance to work with Christopher Lloyd (Back to the Future). It was a great experience and the movie got multiple awards and nominations in the festival circuit. 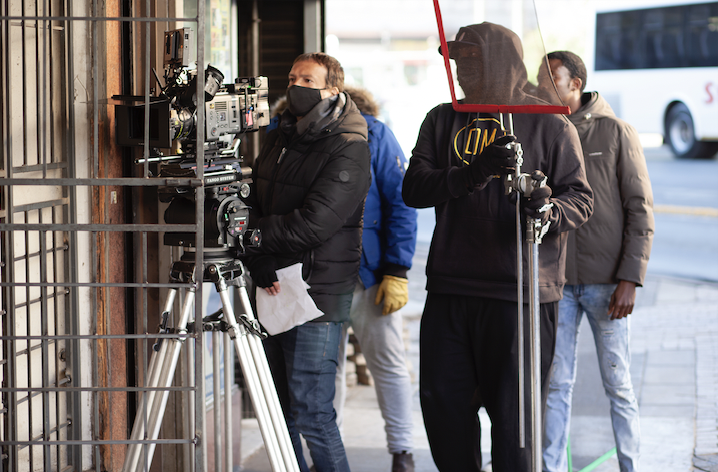 Where are you from?

I am from Lyon, France. This is where I started in cinema by shooting my first short film in 16mm format at the age of 19, at that time, we did not yet have access to digital technology and shooting a film was a real challenge in terms of cost and equipment. It is a city that I particularly like, often unknown to the French, and which has always inspired me creatively. My cinema is closer to genre film, a more visual style, so it made sense to move to Los Angeles.

What does cinema mean to you?

I love cinema. It’s a passion that drives me every day and is an integral part of me. I spend a lot of time preparing and doing storyboards myself, I’m very precise and very meticulous. Cinema is of course an art of entertainment, with a strong commercial aspect, but also an art in its own right. An art that binds generations together but also between different countries and cultures. There is a real language of cinema, a discourse in the use of composition, color, light and sound, but which tends to disappear more and more, giving way to a more intuitive and instinctive cinema. Concerning me, it is precisely the fact of arriving prepared on a set that allows me to make the right compromises when necessary and to leave room for the instinctive. The film industry is in the process of transformation and I think there is still a lot to explore.

Describe to us your creative process while developing a film until the finished project.

I always start with the script, which is the basis of having a good movie. I either write it or re-write it, but I’ve always been involved in the writing process so far. I identify my image system which will drive my composition and the score. I then spend around three months working on a first draft of the storyboard and two months to finalize it with my shots list. I speak with the composer at an early stage about the score which is very important to me. We speak about the story, the characters, the main themes and my image system. During the preparation, I like spending time with the main crew, cinematographer, production designer, etc. to share my vision of the project, do the recce and participate in the cast process. I don’t like doing rehearsals with the actresses and actors and I prefer to use this time to have a conversation with them, to share about their character, where their character comes from, what their goals are, their desire, etc. I like details and to be ready. My favorite part is being on set. It’s a very special moment where all your previous hard work comes finally to life. I then spend time on the editing, doing the rough cut with the editor and my director’s cut. I like to be involved as much as I can during post-production. I also work with the composer and the colorist very closely. 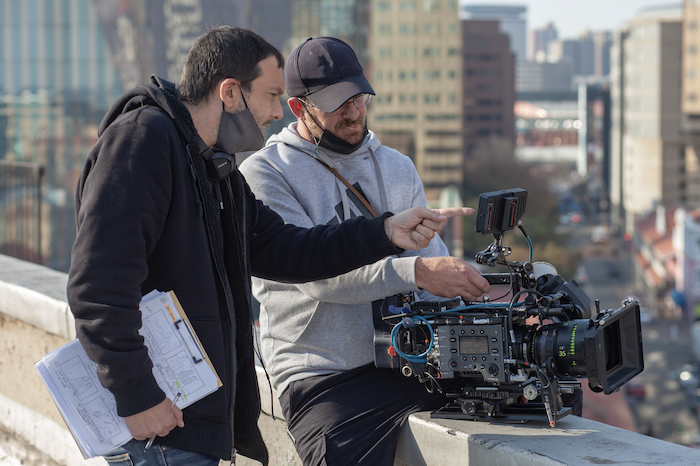 Growing up, what role did cinema play in your family/education?

Cinema has always been a part of me, even as a teenager. I’ve always drawn my own shots, storyboarded scenes, and tried different techniques. Even when I was at school or later on a daily job, I was storyboarding on any piece of paper I could find. My family wasn’t really into cinema or even cared about it. We couldn’t especially afford to go to watch movies in theaters as much as I would have wished, but I got a chance to go watch the one which felt important to me. History of art has always been important to me and I was reading books about painting composition. It was a passion, which helps me even now to do the composition of my shots.

Share with us a time you were faced with a challenge and how you overcame it.

During my last shoot, we were filming one of the most important scenes of the film and we ran out of time. We were filming on-location and setting up the scene took too long for some departments, so the special effects crew and the stunts couldn’t stay and do it. The scene involved some gunshots and they needed more time. I took the cast, the cinematographer and the make-up artists aside to explain the situation and I decided to do the scene without the special effects crew and stunts. They all agreed. I called for “action” and every time there was a gunshot I called for a “pause” so the make-up artists could run to the actor being shot, added blood on his chest and then I resumed the action. We did this for two hours and we are all very happy with the final result on screen.

In what ways does being bilingual allow you to gather a better understanding of people? How does it empower your films?

I think it’s not only being bilingual, it’s also coming from a different country, with a different culture, having been raised and grew up in a different socio-political context. I’m a director in exile, coming from France, living in the U.S.  and now making a movie in South Africa. It’s quite a strange feeling because you don’t feel that you are part of those countries – people look at you differently. Being an outsider allows me to have and bring a fresh vision of the socio-politic context of the country, without being judgmental. I obviously also bring a kind of “French touch” to my films, some kind of art in the entertainment business, something more unique and sophisticated I guess.

I couldn’t say so much at this point because of some confidential agreements, but I am currently working on the development of two thriller movies to be filmed in North America, among other projects. 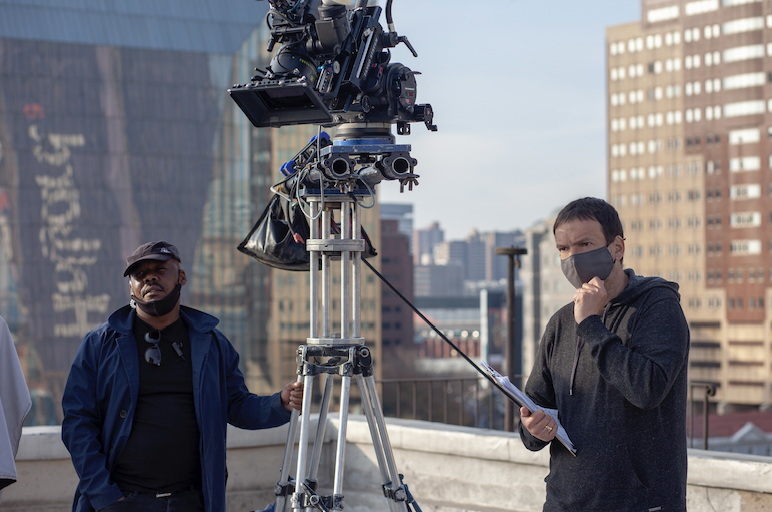