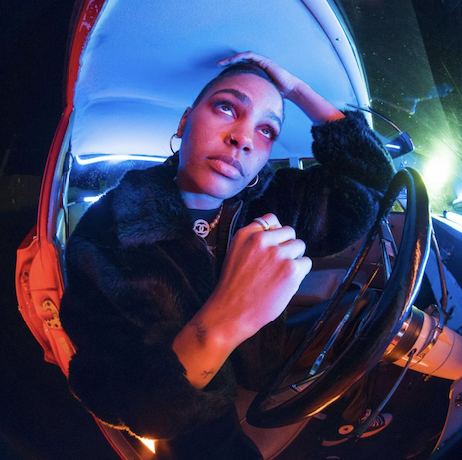 Today, one of New Zealand’s most prominent hip-hop figures, JessB shares her new single “From Tha Jump” available now across all digital streaming platforms. Accompanied with a bold visual by Jodo Valley Productions featuring her collection of mini me’s, this track follows up on a string of remixes throughout 2021 as well as Jess’ revered 2020 EP, 3 Nights in Amsterdam.
LISTEN HERE // WATCH HERE
Igniting the track JessB glides over the resounding bounce of hard hitting 808s, emanating nothing but a clear-cut confidence as she rhymes on staying true to her roots, fully manifesting into the artist she strived to become from the outset of her career. The visual shows pyro-technics, drifting cars, and her posse of “mini me’s” surrounding Jess, matching her fiery verses and unsparing delivery. Her knowledge of her place in hip-hop drips with bravado as she utters the words, “greatness in the making baby do not interrupt.”
Speaking on the track, JessB shares, “From Tha Jump’ is about staying true to the person you were from the beginning. Everyone changes as they grow and experience different parts of life, & the concept behind the song + the video by having “mini me’s” was reflecting on how little Jess would feel about where we managed to get to so far in music. I think she would be pretty stoked.”

Rising to the forefront of New Zealand’s talented artist pool, JessB’s 2020 mixtape 3 Nights in Amsterdam thrust her already applauded reputation to new heights, exploring a fusion of genres like dancehall and Reggaeton, mixed with razor sharp, slick tongued rhymes and guided by her own raw, distinct style. Living up to the hype upon release, Jess earned adoration from music connoisseurs NME, Acclaim, 10 Magazine, and Pilerats, with the mixtape’s standout single “Bullseye” reaching over 1M streams this year.

About JessB
Off the back of a busy 2020, the Auckland rapper JessB shows no sign of slowing down this year, joining forces with OKENYO to remix global star Saweetie’s collaboration with Doja Cat,“Best Friend”, as well as effortlessly polishing a rework of U.K rapper Kranium’s wavy single “Toxic”.
Jess’ rise through the ranks of hip-hop is attributed to her energetic, outspoken style, and a sound cultivated over years in the business. Jess became the first female MC to appear on Red Bull 64 Bars in 2017, and has gone on to represent the new wave of New Zealand hip hop at stages in London, Amsterdam, LA, New York. She’s also hit Aussie shores, setting the festival scene alight at Venice Biennale, Red Bull Music Festival, Splendour in the Grass, Laneway Festival, Fire Fight Australia alongside Baker Boy, and headed back to New Zealand for 660’s Auckland shows at Eden Park.
Having already galvanized her notoriety as a rapper by opening for high profile international acts Lil Simz, Stormzy, YG and many more, Jess has next locked in a set at Jim Beam HomeGrown festival in 2022. Additionally, JessB’s plaudits extend to receiving the 2019 MTV European Music Award for Best New Zealand Act, gaining support from Spotify’s global A1 Hip-Hop playlist, then performing at the flagship Spotify A1 Live event in 2019. Since the release of her first two acclaimed EPs, New Views and Bloom, JessB’s sonic identity continues to take shape, teasing fans with the release of her new album slated to drop in early 2022.
Proving herself as a force to be reckoned with both in New Zealand and on the international stage, “From Tha Jump ” is yet another display of JessB’s untamed flow and fervent confidence, promising more to come in the new year.
Listen to “From Tha Jump”
Pivot Link
Watch “From Tha Jump” (Official Video)
YouTube
Follow JessB
Instagram
Twitter
Facebook
Spotify
YouTube