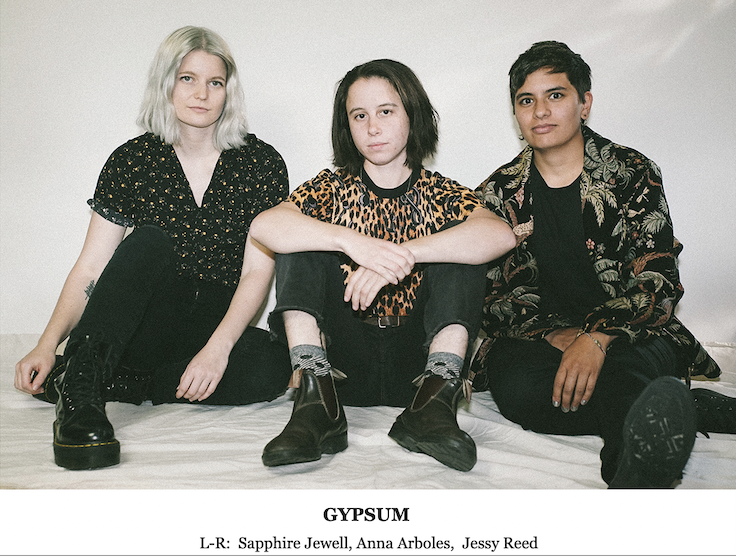 showcasing the band at its most collaborative

Premiered via Under The Radar

“My biggest memory about this song is writing it in the middle of summer in this tiny rehearsal space we had that would just bake in the sun all day that would just be an oven when we showed up that evening,” says Gypsum’s guitarist and vocalist Anna Arboles about the outfit’s new and most collaborative track “Lungs,” on which outer space riffs and – as Arboles calls it – “hairy-scary feedback” cacophonously coalesce over sophisticated snare patterns. “We didn’t have AC, so we would soak and then freeze bandanas in the mini fridge to wrap around our necks and then just sweat it out while we worked out this song. Somehow it feels fitting for the song that is about breaking out of your own body to get what you want,” Arboles explains. Rounded out by drummer Jessy Reed and guitarist and vocalist, Sapphire Jewell, Gypsum is a synergistic exercise in collectivist arrangement, dissolving artistic ego into cooperativity. The track (premiered via Under The Radar) is the third single to come off their eponymous debut self-titled album out on October 12, 2021 via Sonic Ritual.

Steeped in classic-sounding shoegaze, recalling such pivotal acts such as Cocteau Twins, Throwing Muses, and Lush, “Lungs” swirls in swaths of shimmering musical layers with their vocals peeking out of the clouds like rays of sunlight. Jewell adds, “I love the heaviness of this song with the heavenly harmonies. It’s one of my favorites to play live.” Arboles chimes in saying that the creative process in general felt very “embodied.” “Recording this song was a fav of mine too. I played my old Silvertone with Goldfoil pickups into an old big muff into my Fender deluxe reverb. We rarely use distorted sounds, so this was my one chance to get it right. I ended up layering fuzzed out sounds with a super clean layer, and kind of mixed them in and out to taste. Sapphire is a pedal genius and I think did this song in one track and it sounds absolutely huge. Her whole guitar situation in the last chorus blows my mind each listen.”

The band’s debut album was recorded over 14 days at Station House Studio with engineer Mark Rains (Tanya Tucker, Alice Bag), and is a deeply rewarding listen dense with mystery, complexity, darkness, majesty, and beauty. A great showcase of some of the album’s themes and textures comes from the previously released singles: the lustrous, percussion-driven “Follow Me,” which was inspired by the people throughout history who have been forced to leave their home and seek refuge and “Give It,” which is about self-determination and identity and features mesmerizing hi-hat work and chasmic, stop-and-start waves of Sleater-Kinney-esque guitar interplay.

Assembled through the knotty intersections between guitars, imploring harmonies and exploratory rhythms, Gypsum features all three members on backing vocals, Jewell and Arboles’ voices blend with atomic affinity, rich alto leads encircled by hazily imploring harmony stacks. Reed, whose interest in Brazillian polyrhythms and Latin percussion inflect her performance, used a hodgepodge of kits ranging from the 1930s to present, swapping out toms regularly and changing snare tunings to accommodate her “sounds and vision” for each track. While the guitarists’ lifelong love of riot grrl and grunge inform the dynamic builds of their intricate fretwork.

As a group, Gypsum cites influences as diverse as punk, prog, jazz and psychedelia and takes inspiration from genre-hopping jazz and punk acts like Hiatus Kaiyote, DIIV and Foals. If it sounds like a science experiment, its three members view it that way, too.