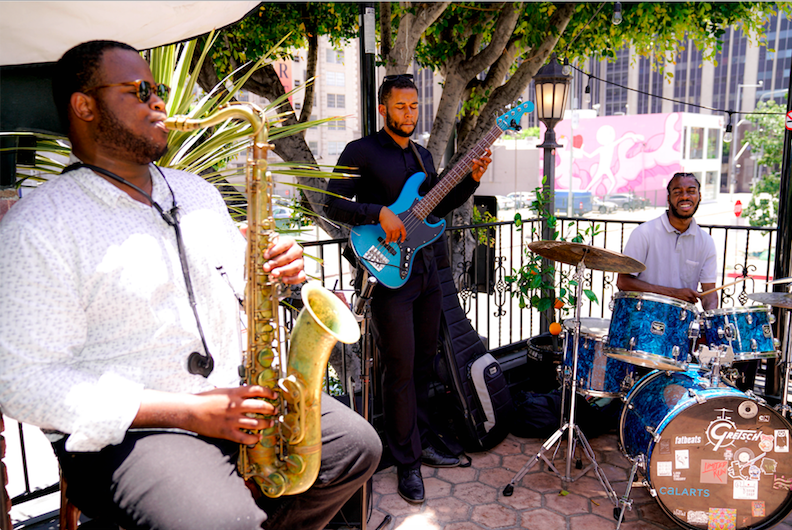 Denicola Enterprises, along with ScholasTICS Tourette Supporters and Southern California Tourette Association recently had their annual Team Up for Tourette’s Red Carpet Brunch & Fundraiser on June 9th. The event was held at Preux & Proper in Downtown Los Angeles from 12-5PM where delicious southern food was served as well as great cocktails. 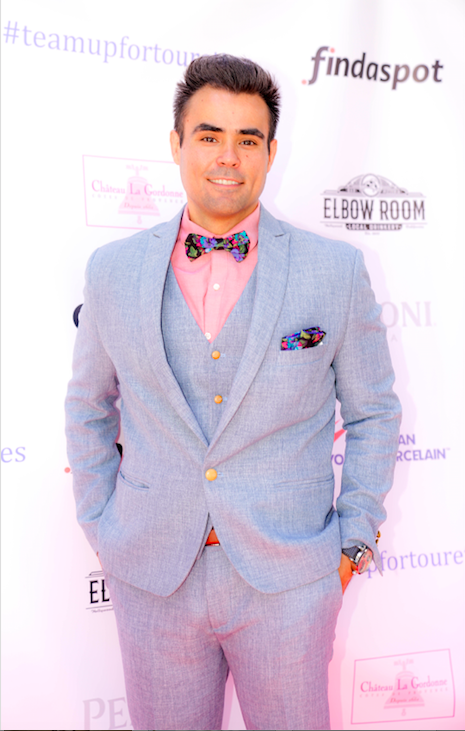 The founder of Denicola Enterprises and producer of the event, Devin Denicola has a close relationship with Tourette which explains why he holds it dear to his heart. It all began when he was a kid: “I was diagnosed with Tourette’s when I was seven years old. It was fairly new back then. Not many people knew what it was so everything was trial and error with medications, treatments, things like that. Since then, I’ve been focusing on trying to figure out a way that I can help other people with Tourette’s.”

It was a beautiful day in Downtown and the fundraiser went smoothly. A great group of people came together to support the cause from recording artis 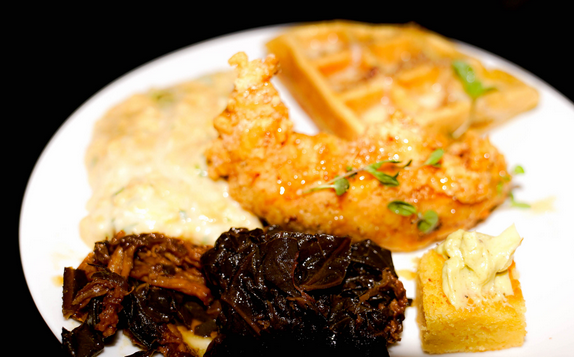 t El-Jay to Sean Toohey, Founder of Toohey Ties as well as influencer Amanda Paris and more. The room was filled with jazz, laughter, and positive vibes as the guests enjoyed the chef’s work and took part in the auction.

In the end, we can all do our part to share informed knowledge with others, increasing awareness and that’s exactly what Devin Denicola did.

Anyone who wants to save time and energy when traveling to meet up with others can download the free Findaspot app on the App Store for iPhone or on Google Play for Android. Users simply enter where each person will be traveling from, and Findaspot displays the recommended spots on a map and in list form along with supporting Yelp information. Results can then be shared easily with others, eliminating the headaches and back-and-forth of finding a place that works for everyone.

Quanta CBD
Quanta, a biotech firm specializing in resonance energy, today announced the launch of its patented technology into the cannabis industry. Quanta’s core technology uses quantum physics to manipulate and stabilize electron spin in naturally occurring elements, such as cannabinoids, to increase performance in the body. The result of its process creates what the company calls “Polarized Cannabis.”

Elbow Room
Elbow Room LA is an east coast style bar located in the heart of Los Angeles. Opening at noon and closing at 2:00am, their happy hour runs from 3:00pm-8:00pm. Every night is pizza night and there are typically a few special events to attend every month, such as 80s movies and music night and king trivia.

Peroni Italia
Peroni Brewery is a brewing company, founded by Francesco Peroni in Vigevano, Italy in 1846. It is probably best known worldwide for its premium lager, Nastro Azzurro (5.1% ABV), which was the 13th best-selling beer in the United Kingdom in 2010. The Peroni company was established under the founding family name in the town of Vigevano, Italy, in 1846. The company was moved to Rome by Giovanni Peroni in 1864, six years prior to Rome becoming the Italian capital in 1870. Throughout the late 19th and early 20th centuries, the company became one of the most prominent brewing companies in the newly unified Italian nation.

By the 1990s, both the Peroni brand name and product line were distributed and known worldwide. The London-based brewing giant SABMiller bought the company in 2003, making it one of the few international brands in its portfolio. Peroni was bought from SABMiller by the Japanese brewing giant Asahi in February 2016.

American Wonder Porcelain, comprised of a team of tile veterans who have come together from leading organizations within the industry, incorporates proven processes and strategy as well as a new vision for manufacturing, marketing, and selling tile in the United States. The U.S. division is committed to the future of the tile industry in America and believes future growth depends upon increasing domestic manufacturing, adopting new, innovative techniques and spearheading ongoing research and development within the industry.

Chateau La Gordonne
Château La Gordonne has always had wide appeal. In the 1st century BC, the Romans set up on the site to take advantage of its vines & its wines. In 1300, the Carthusians from the La Verne monastery began working the vineyard. The estate was planted with vines & olive trees, and took its name from Conseiller de Gourdon, who owned it from 1650 to 1663. In 1663, the Conseiller de Dedons, Lord of Pierrefeu, bought part of the Aurran property known as known as `La Gordonne’ & its house, vines, and olive trees.

CURTIS & Co.
Businessman and magazine publishing legend Curtis Wong traveled to Europe, he was fascinated by the watches he would see in all the stores from London, to Paris to Munich to Geneva, and beyond. As a young boy, he loved watches and timepieces and that passion only grew stronger with each passing year. And as his business grew and became more successful, he began collecting watches from many of the world’s best watchmakers. He envisioned a watch unlike anything any other watchmaker made, and so very different from anything else he could find. It had to be elegant. It had to be exceptional. It needed to be high-tech and use the world’s most cutting-edge and advanced technologies.

Preux & Proper
Hailing from humble beginnings in Baton Rouge, LA, owner/operator Joshua Kopel wanted to bring a little bit of The South to Southern California. In 2010 he opened Five0Four, a New Orleans style bar, in Hollywood. Four years later, Kopel looked to DTLA, broadened his focus from Bourbon Street to The South as a whole, and opened up Preux & Proper. In walks Sammy Monsour, a third generation chef that grew up in his father’s kitchen in Chapel Hill, NC.  Kopel and Monsour hit it off instantly, and what came to fruition was the best kind of Southern. Monsour’s food encompasses his classical training at the CIA, his Lebanese ancestry, and his Southern roots.

Drip Doctors
A small group of brainstorming Emergency Physicians and Providers who took a concept we saw for treating the critically ill, intoxicated, and health deficient to a new era of modern medical care. After years of working in the ER, we saw the benefits of IV Vitamin Therapy and wanted to make it accessible so people did not have to wait for hours to be treated at the hospital. Since then, we have treated countless people that are vitamin and nutrient deficient, with various IV infusions and treatments to slow down or reverse adverse effects on their mental and physical health. We hope to encourage the preventative practice of optimizing health and wellness by giving your body the much needed nutrients that prevent damage or decrease brain function or physical performance.

The Haus
With over 25 years of combined automotive experience, we want to be Southern California’s leading independent BMW & MINI Service Center in Sherman Oaks, CA. We understand that cost may be a deciding factor when servicing your BMW/MINI. That is why when you bring your car to our service center, rest assured that you will be getting the lowest prices in Los Angeles without sacrificing quality or service. We provide exceptional service using state of the art automotive repair equipment. When you bring your vehicle to The Haus, your mind is at ease, knowing that your vehicle is in the hands of BMW/MINI-trained technicians. We use only BMW/MINI original equipment manufacturer (OEM) parts or equivalent. We are able to provide exactly what your vehicle needs. Every part is designed to fit your BMW/MINI to perfection. Each part comes with a 2 year or 24,000 mile warranty (same as the dealer). So when it’s time for servicing your BMW or Mini, feel confident in bringing it to those who know it best!

‘Babes in Toyland’ gives patrons an opportunity to give back to the community alongside some of the most beautiful women in the world. The 5th Annual ‘Babes in Toyland’ Charity Toy Drive will be hosted by over 100 models, actresses, social media influencers. The combined Social Media following of the hosts is expected to exceed 100 million.

Fusing influences from Americana, Music and Motorsports the 7th Revolution Signature Collection oozes cool. From the amazing fit and fabrics to the subtle but distinct graphics this collection has something for everyone. Every detail has been painstakingly planned and executed. 7th Revolution is an entire collection of extremely wearable fashion. 7th Revolution isn’t a clothing company….its an Attitude. Inspired by Rock and Roll,  tattoo culture. Tattoo, tattoo apparel, country living, country music, rock n roll, motorcycles and beach living.

Sunstone Vineyards & Winery
When the Rice Family moved in 1989 from Santa Barbara to a peaceful 52-acre Santa Ynez ranch to grow wine grapes, little did they know that they would be stewards to one of the first organic vineyard estates in Santa Barbara County. Fred and Linda, along with son Bion, and daughters Ashley and Brittany, originally chose the terraced site overlooking the Santa Ynez River for its ideal south-sloping exposure, its sandy, rocky soil, and a micro-climate that features early morning fog, warm, breezy afternoons, and cool evenings. It proved to be a fortuitous choice, as they soon discovered that it was a perfect spot for the growing of top-notch organic grapes and enjoying a wine country lifestyle.

Crunch Fitness
Crunch was founded in 1989 as a fitness studio by Doug Levine, a former stockbroker.[1][2] The clubs became popular by appealing to young upscale members and featuring heavy promotions and marketing with some humorous and sexual connotations. They were initially profitable in large part due to successful promotion of logo merchandise sales within the clubs.[3] They featured some unusual classes such as pole dancing, bicycle-based yoga, coed wrestling, an “Abs, Thighs and Gossip” class run by a drag queen, and Capoeira.[2] Although the classes were later standardized across various locations, some popular offbeat classes remained, such as dodgeball and karaoke bicycling.

MR by Melissa Riso
Melissa Riso has been a hair stylist specializing in men’s haircuts since 2005. Through her experience with men’s hair, she quickly realized that men don’t have many options when it comes to quality hair products.

Melissa decided to create and customize her own line of men’s hair products. She understands men’s hair and wanted to create products that men will use and love for years. In addition to being a hair stylist, Melissa has also built a large fan base over the years as an actress and model. She appreciates all the support and love from her fans and will always do her best to create the best products.

A recent transplant from her hometown in Vancouver, BC Canada.Traci Lynn Cowan has been an athlete her whole life she grew up as a soccer champion, most recently as a national level figure competitor and heading to Nationals with the NPC / IFBB for her PRO card in 2017. Traci Lynn has become an expert in the field of Health, Fitness and nutrition. She is a Life Success Coach, internationally known Celebrity Fitness Trainer and Coach. She is also known as TLCUNLEASHED or the Fitness Guru. T L.C formerly was the Talk Radio Show Host of Life Angelz and now moved to her own talk show Hollywood Vibes Sports & Life on the TLCUNLEASHED network. You will find the weekly celebrity interviews on Traci Lynn Cowan’s Youtube channel.

One thought on “Denicola Enterprises Fundraiser for Tourette”