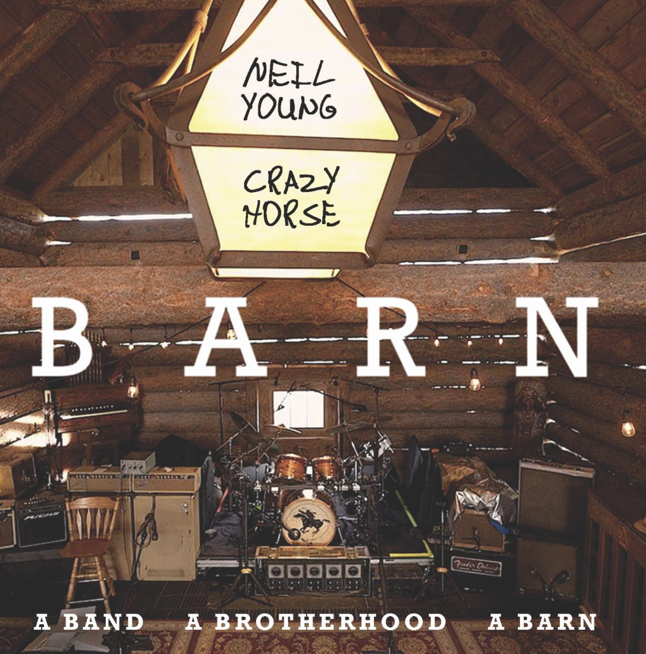 AVAILABLE TO VIEW ON YOUTUBE JANUARY 20TH
BARN: A revealing and beautiful documentary about the making of the new Neil Young with Crazy Horse similarly titled and enthusiastically received album BARN, will begin streaming exclusively on YouTube beginning Thursday, January 20th, at 10:00AM PT.
BARN the documentary film, directed by Daryl Hannah (dhlovelife), catches a rare intimate glimpse of this legendary band as they make music in a restored 19th century log barn under the full moon. The film captures Neil and the Horse in an organic way, their easy irreverent humor, their brotherhood, and of course their music, as it was created. BARN intentionally lingers on single shots for entire songs, showing there are no tricks, revealing the raw, organic and spontaneous process of the music bursting to life from unexpected moments. Exquisite changes of light and weather dance in the remote meadow where the barn sits, adding a sweet, mystical magic as the music thumps, reverberates and echoes. The film is infused with the gratitude and joy that permeated the whole experience.
BARN, the new album by Neil Young with Crazy Horse and produced by The Volume Dealers – Neil Young and Niko Bolas — made an instant, overwhelming impact on critics and fans around the world. Upon its December 10th release, BARN entered Billboard’s Top Album Sales chart in the #9 position.
“Neil Young and Crazy Horse…Thunderous and ornery on BARN. A great album.”  – Rolling Stone
“BARN practically feels like a return to the gold standard of Tonight’s The Night, On The Beach, and Rust Never Sleeps.” — Uproxx
“’Barn’ – the bruised and battered grandeur that only this band can deliver.” – Wall Street Journal
The Reprise Records album is available on vinyl, CD, cassette, and digitally, including hi-res audio via Xstream Store © at NYA.  The deluxe edition includes the LP, CD, and Blu-ray documentary film with six behind-the-scenes photos included with the LPs, sold at independent record stores, and The Greedy Hand Store at NYA.  All NYA Greedy Hand Store purchases of BARN (LP, CD, cassette, deluxe boxset) come with a free hi-res digital audio download. Stop by The Greedy Hand Store to check out the new line of custom BARN merchandise available now.
The BARN Blu-ray is available now as a stand-alone release via The Greedy Hand Store at NYA.
BARN Tracklisting:
1. Song of the Seasons
2. Heading West
3. Change Ain’t Never Gonna
4. Canerican
5. Shape of You
6. They Might Be Lost
7. Human Race
8. Tumblin’ Thru the Years
9. Welcome Back
10. Don’t Forget Love
Produced by The Volume Dealers – Neil Young and Niko Bolas.