Addison Rae Returns with Spotify Original Podcast THAT WAS FUN? 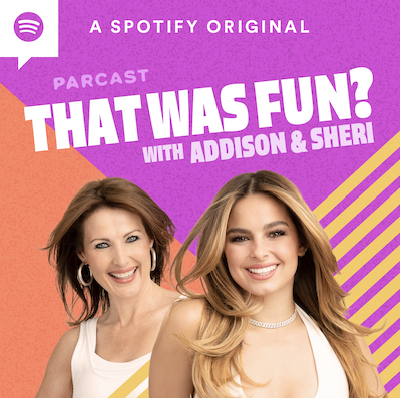 The show, now called That Was Fun? With Addison and Sheri (previously Mama Knows Best), is in an all-new video format complete with celebrity guests!

In the new season of the Spotify Original podcast, audiences will not only hear what’s going on in Addison’s life right now but they’ll get to watch as well. Addison will give listeners unlimited access and a behind the scenes look into her life.

Addison and Sheri, the mother-daughter duo, will be joined by a big-name special guest every week to discuss relationships, family drama, fashion, and music to ultimately try and figure out…was that actually fun? The new season kicks off with guests like TikTok star Avani Gregg, singer-songwriter Olivia O’Brien and dancer/actress Maddie Ziegler.

You can WATCH the premiere episode HERE, where Addison sits down with TikTokker and make-up artist Avani Gregg to chat about truly unbelievable fan interactions, relationship drama, and social media horror stories. Then, Sheri joins to reminisce with Addison about their week in Atlanta, including the laughable awkwardness that happened right before Jake Paul’s boxing match.