Thomas Doherty: Love doesn’t have to be blinding
By Alexandra Bonnet

Love. In the dictionary, love is defined as “an intense feeling of deep affection,” and as we all know it can get, well, complicated. Currently starring in Hulu’s new series “High Fidelity,” Thomas Doherty is part of a story in which the struggle of love is real. Based on the film with John Cusack, the story is gender-swapped where Zoe Kravtiz plays the role of “Rob.” For Doherty, “it was an amazing experience.” It was the first time he filmed a project in New York and was lucky to work with such a great cast: “ I honestly had like the best time, nicest people to work with.”

In order to play this part, the talented actor had to add ‘playing the guitar’ to his resume. “It was kind of like a panic learn,” he shared. When going to an audition, they tend to ask questions such as ‘Do you ride a horse?’ or ‘Can you play an instrument?’ and in Doherty’s case it was ‘Do you play the guitar?’ Of course, his answer was yes! A couple of months went by and when he got the job he remembered he had to learn the guitar, “so it was quite stressful. I managed to learn to play the guitar… kind of. If you’re a real musician I’d advise you not to look at my hands,” he expressed laughingly. Overall, his experience on set was a beautiful one.

As the show talks about love, heartbreak, and self-reflection, it begged the question: what does love mean for Thomas Doherty? Well, for him it isn’t something you can objectify, nor does he believe it is personal. “I think it’s already there in everyone naturally. Like, a natural essence,” he put so beautifully. “It’s hard to put into words because your brain has to put into words what you’re heart is feeling which it can never do.” After all, what the mind thinks and what the heart wants can be two very different things! At the end of the day, it is important to be there for those we love.

There are a million and one ways to show someone you love them. Doherty opened up on this and shared that one of the most beautiful ways you could show someone you love them is with “your unjudgemental presence, just to be there.” Sometimes you can’t give someone what they want but just being present, with no judgment, is invaluable. “I don’t think you can make someone actually do something. They need to do it themselves. They need to want to do it themselves,” and he feels so fortunate to have people around him who have taught him this and are just there. Receiving judgment-free love is key as it relieves the pressure of having to be perfect all the time for those around us.

Balancing your career, life, and relationships can seem almost impossible a times but Doherty does so gracefully. As he explained, being an actor is structureless as you could be doing nothing for three weeks and then one morning, you get a call and you are away n a project for six months. “There is no structure so you do kind of have to create your own schedule,” he shared. “Otherwise, you’ll wait up ‘til like four in the morning working on your craft, reading scripts and watching films and stuff.” Lately, rock climbing has become a source of stability and balance for the talented actor as well as socializing. With many auditions under his belt, he keeps busy and keeps moving forward because as he put it: “You are your product. You have to constantly maintain that physically, emotionally, and mentally.” As an actor, you can also tend to connect to others’ feelings more and be quite empathetic however there are times where you must draw the line.

As we all struggle to find a happy balance in life, we can’t ignore the things that drive us crazy either. For Doherty, his biggest peeve is selfish people. “Oh my god, I hate selfish people. I can’t stand them. Selfishness. Always selfishness,” he insisted on. He does try to empathize with people but there “comes a point where selfishness and greed just… I don’t know, I don’t like that.” I think we can all agree on this one. After all, we do live in a world where many think of themselves first when we should all remember that we are here together not against each other.

Before Doherty became the wise man and talented actor that he is today, he was just a young boy from Scotland who was acting: “I think my mom just wanted to get me out of the house, to be honest,” he chuckled. He was ten years old at the time and found himself watching ‘Titanic.’ He remembers seeing Leonardo Dicaprio on screen and was absolutely convinced he could do it. That is where it all started. It being more concrete when he made it to college and was doing theatre to become a musical theatre performer. He was lucky to be on set with amazing directors and other actors, something he never takes granted for. In his words: “I’m really happy. I’m so lucky. There’s not a lot of structure when you’re an actor and for me, that’s probably the hardest part because I love what I do. It’s an opportunity for you to play with whatever you have and you’re lucky enough to be surrounded by people who are like-minded so the acting itself has never been a challenge… yet.”

The handsome and Scottish Thomas Doherty knows what it means to work hard, love deeply, and go with the flow of life. Never having been a five or ten-year plan kind of guy, where he wants to be isn’t necessarily circumstantial, “I guess more of a state of mind or state of the way I am,” he expressed. “Be happy. I’m trying to achieve that because I think when you’re happy you’re not rude to anyone, you’re not mean, you’re not doing stuff that you don’t want.” He is in a constant stay of evolvement and thrives to connect to himself and those around him a little more every day. Act, Search, and Love. 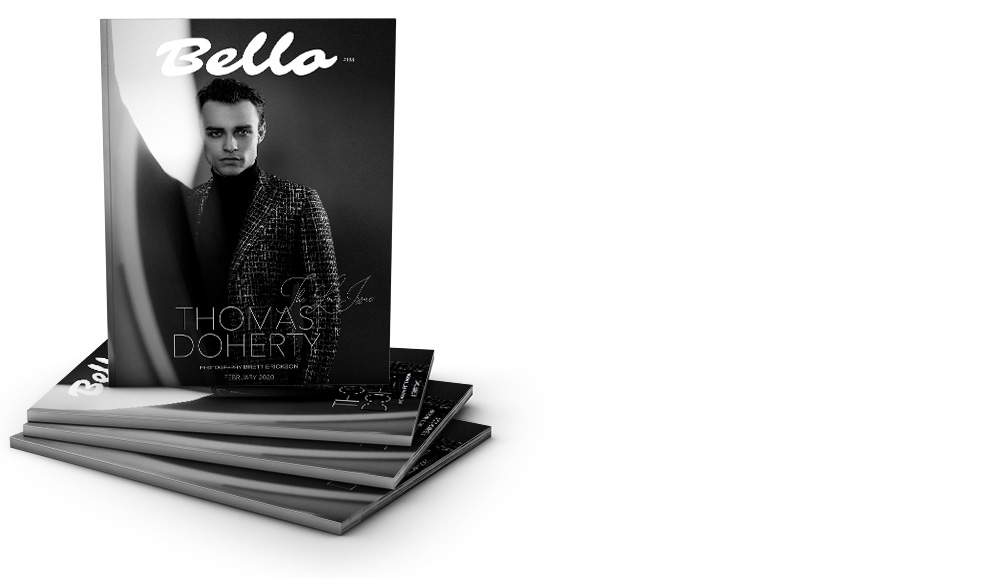