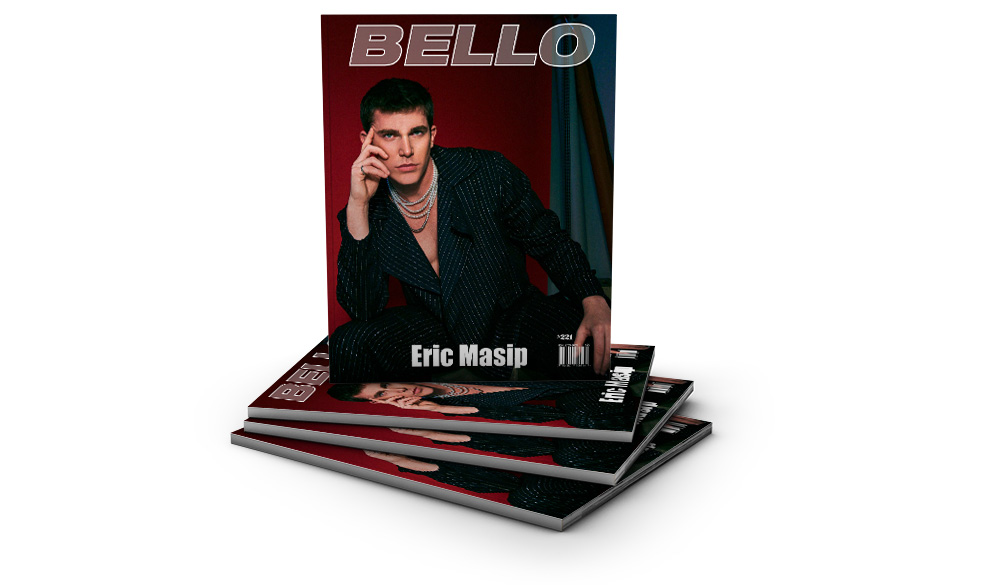 With international releases hitting mainstream media more and more often, actors from around the world are becoming more and more recognizable. One of those recognizable faces we hope will be Spanish actor Eric Masip, currently known for his role as Artemis Hidalgo in “Through My Window” (originally titled “A través de mi Ventana”). Bello was lucky enough to catch Eric while he was in Los Angeles, and we managed to conduct both a photoshoot and an interview that impressed us more than what we see on the screen from the talented young actor.

While Eric has held most of his acting career in Spain and Spanish projects, his professionalism and charming attitude make him a global personality that will soon extend over various international borders. Besides “Through My Window”, Eric has also been featured in “Alba”, based on the Turkish hit series “Fatmagül’ün Suçu Ne?”, “Veneno”, the biographical story of the Transgender icon and TV personality and “Elite”, the Spanish teen drama that recently took the US market by storm.

While Netflix may have robbed us of some of his activities until recently, we hope the veteran Spanish actor will have more to give to American audiences. For starters, the rom-com “Through My Window” offers a promising storyline to those who binged other romantic series like “Never Have I Ever”. Set to be a trilogy, Eric shared with us that he has already shot the second film in the series bringing back his character Artemis Hidalgo. Eric describes Artemis, the billionaire “playboy”, as “an iceberg”, a cold, ever-serious young adult who lives under constant pressure from his parents as Artemis is the older brother to two other characters including the male lead.

Shot in Barcelona and The Costa Brava, Eric shared how he conducted his research in bringing Artemis to life. From interacting closely with many involved in the film from the costume designer to the director, Eric molded and proposed what Artemis would be like. Take it as a fun fact, but Eric made Artemis into a watch guy! In thinking of what a billionaire playboy would include as part of his signature ensemble, Eric thought making sure he always had a watch would be a perfect touch. So much so, that Eric provided his own watch once in a while. Make sure to keep an eye out and try to figure out which watch was Eric’s own!

Although Eric physically carries the charm and looks of any leading man, his knowledge of the industry and eager yearning to master his craft makes anyone want to listen to the stories he has of set life. In our conversation, he often referenced classic actors like Paul Newman, Marlon Brando, and Steve McQueen and his knowledge of Hollywood’s history personally makes this reporter respect his talent more than any popular social media personality landing a role in a major motion picture. He is very much driven by the urge to act than the lights, glitz, and glamour that classic Hollywood is reminiscent of.

Speaking to Eric easily demonstrated his passion and love for acting. He doesn’t believe any role to necessarily be an easy one, fully respecting each part knowing there is work to be done. We even spoke of the difference in the entertainment industry between Spanish and American projects. It would come as no surprise that he attributes some difference to the passion in his Spanish blood which can be seen clearly on screen, but also the approach in the American industry with time and money. Hollywood has the luxury of bigger budgets and more time in perfecting the craft and hopefully, Eric will grace the studios of Hollywoodland.

So what is next for Eric? For starters, he hopes to bring his involvement past being in front of the camera. He is currently working on writing his own project and hopes to one-day executively produce other projects. A fan of American shows like “Euphoria”, he hopes to one day play a likable anti-hero. Not necessarily a bad guy, but a lovable bad boy. And as clearly demonstrated in his photoshoot, we already know he could easily play that role, reaching the hearts of viewers worldwide. If you haven’t fallen in love with him just yet, then Eric Masip as that likable bad boy sounds riveting.