If we have a secret to share this season, it’s that we at Bello know more a little more about “Pretty Little Liars: Original Sin” than you do! Who did we hear it from? Not “A”, but another “A” in real life. Talking about none other than new cast member Alex Aiono who plays star football player Shawn Noble.

If you’ve seen the show so far, you know Shawn isn’t your typical high school jock who is also close to one of the show’s female leads, Noa Olivar played by Maia Reficco. Will Shawn’s relationship with Noa bring out the worst in him? Well as Alex tells us, “nobody’s perfect”. Both an active musician and actor, Alex Aiono is no stranger to the small and big screen and we cannot wait to see what comes from his character in PLL:OS. From his artistic skills, to talking about what he would do if he found himself in a real-life horror situation, check out what we learned from Alex in our convo below!

Fans have been expecting this new “Pretty Little Liars” series since the moment the announcement came out. Did you have any familiarity with the franchise before auditioning / being casted? Did you watch the original?

I mean, I grew up with three sisters! So of course they watched the original, and I can’t lie I snuck a few episodes in myself.

You’ve had an extensive career to date both in music and acting. How did you discover your passion for each form of art?

First and foremost, I really appreciate this question. In a world where everybody wants everything right now, I’m so grateful that I have had amazing mentors and teams around me that have helped create a career of longevity, happiness and constant adventure! For me, it all started with music. As a kid, it was everything. Singing with my sisters, writing songs, staying home and learning new instruments; it was so clear to me that music was what I wanted to do for the rest of my life. But a few years ago (and again shoutout to B, Lizzy, and my big dawg Peter DeSantis), the opportunity to act came up. And if you know me at all, there’s nothing I love more than taking something and running as far as I can with it. Over these last couple years, my passion for acting has grown in ways I never would’ve imagined. Now, you couldn’t take either of these arts away from me!

Who or what has had the biggest influence on your career?

To spare y’all from an endless name drop Oscar winning speech type of answer (which one day, if I’m lucky, I’ll get to deliver), I’ll just pick the single biggest influence I’ve had throughout my career. Actually my life. My family is everything to me. Nobody has sacrificed as much for my journey as my parents and my sisters. Whether it was waking up at 6am to the sound of me trying to flush out an idea on the piano, or uprooting our entire life in Arizona for a 14 year old’s dream, I never once have felt unsupported. And all they’ve ever encouraged me to do was be me. Fully and unapologetically me. I’ve carried that little influence in my head everywhere I’ve gone since I moved to LA, and I would argue that it’s the best guidance I’ve had on this journey.

Can you share with us fond memories or fun stories in shooting this season of PLL? Anything you weren’t aware of before shooting that was exciting when you showed up to set?

I think the biggest thing that I didn’t prepare for before flying out to shoot. PLL was working with an ensemble cast of 20-year-olds. I vividly remember all of us meeting for the first time as a group in our big cast green room at the studio. It was literally like a bunch of 12-year-old‘s at a summer camp; and we’ve kept that energy ever since! So many hilarious stories and adventures that I’ve built up these huge pillars of friendship between us all. I was actually just FaceTime in with Maia Reficco last night, and we were reminiscing the scenes we shot on my birthday. I can’t talk about the scenes themselves, because they haven’t aired yet. But me, Maia, and my brother, Elias Kacavas had one of the best days. Cracking jokes, making art, living our dreams!

If you (Alex Aiono) were to put yourself into the world of PLL and if you began to receive cryptic texts, how would you react? (Most audience members shout to the screen and say, “IGNORE THE TEXTS AND TELL SOMEONE”!)

Damn, I think my toxic trait would actually play into it and try and figure out who it was. Obviously, the right thing to do is follow the audience advice…

The series is known to be much darker than the original, with horror fanatics stating it brings in inspiration from horror movie franchises. Do you like horror movies? Which are some of your favorite horror movies? Are there any you would want to be in if there is sequel or more?

Like a lot of things in my life growing up, I forced myself to like horror movies for a girl. But I’m so glad I did because I’m addicted to them now. I would have to say The Strangers (the first one, sorry Bailee) is my favorite horror movie all time. But if I were to be a part of any franchise, I think I would have to do one of The Purge movies. They just look so fun to make!

I know you are sworn to secrecy or “A” will get you, but is there anything you can share about what people can expect from Shawn Noble?

My favorite thing about bringing Shawn to life was breaking the normal construct of a “star football player”. Shawn isn’t the normal football captain-toxic masculinity type that were used to seeing on the screen. He’s obviously a sweetheart when it comes to Noa. And I’m not going to be the one who gets in trouble for spilling too much, but let’s just say… nobody’s perfect.

Going back to music, is there a song of yours you would love to see on the soundtrack of this season or the next? Think your experience with PLL could inspire you to write an eerie song?

Getting back to the music is exactly what I’m on right now. To answer your question, I got a lot of music that I’m really proud of coming out very soon. So I’m excited to hopefully integrate that music into the art I create on camera! And when it comes to writing, eerie songs, I think Pretty Little Liars is the best inspiration you can get!

As you may know Bello is a fashion lifestyle magazine. Can you share with us what you like to do on your free time and describe your style in fashion.

In my free time, I’m all about good music, good food, and good people! I love adventuring and getting active. I love feeling good and looking good. I love being myself and following my heart. I feel like my style in fashion is a mixture of all those things above with trying new things and expanding who I am.

Lasting words you can share with fans of PLL or your music?

To everybody, whether you’re a day one, a new fan, or anything in between. Hop in, because we got a lot of love, a lot of laughs, and a lot of shit to get done:) 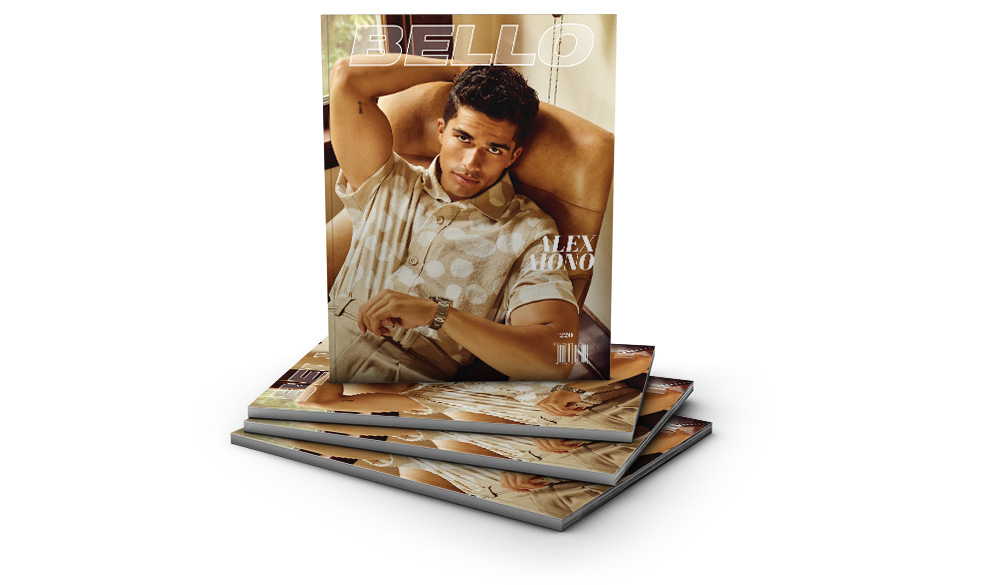 Get your Digital or Print issue