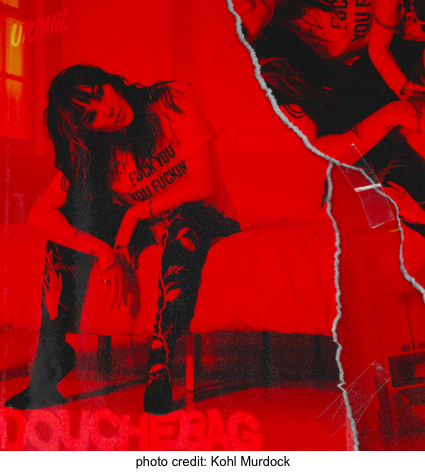 Right out of the gate, UPSAHL’s vocals curl around a humming guitar riff. Just as she nods to all of our favorite nineties rock queens, the track dips in and out of a bass-y bounce as she leans into the hook, “You’re a douchebag, and I can prove that.” Of course, she observes, “I was the Courtney to your Kurt Cobain,” before adding, “I wanted us to end up as friends, but you fucked it all up.” Directed by her frequent collaborator, George Gallardo Kattah, the visual reflects all of these feels. After she deals with a cheater by introducing him to the end of her boot, she kicks more ass in her own Street Fighter-style arcade game before shutting down a bevy of “douchebags” at a diner. Replete with throwback alternative vibes, femme fatale charm, and her signature unfiltered lyricism, “Douchebag” is everything we’ve come to expect from her and so much more.

Most importantly, it heralds the arrival of her anxiously awaited full-length debut album due out this fall.

About UPSAHL:
Early in her career, UPSAHL released songs which gained much-deserved recognition throughout the Phoenix music scene. As a graduate of the Arizona School for the Arts, she went on to ignite a groundswell of fan adoration and tastemaker praise by way of numerous indie alternative gems. “Can You Hear Me Now” achieved a palpable viral buzz followed by the widely praised single “Drugs”, which has been used in nearly 2,000,000 TikTok videos, reaching #6 on the TikTok Viral Chart and #1 Sound on the TikTok Trends Chart. It has also been featured in clips posted by the likes of James Charles, Charly Jordan, Alex French, Jason Derulo, and more. “Drugs” led to a momentous year for the “up-and-coming indie-pop queen”—according to Alternative Press.
2019 saw UPSAHL take the stage at Lollapalooza and support acts including PVRIS, Joywave, BROODS, and Young the Giant. Additionally, YouTube claimed UPSAHL as their ‘Artist on the Rise,’ Nylon proclaimed, “She’s on her rock star ish,” and NME declared she “has a knack for fusing fizzy hooks with her drawling delivery of pithy lyrics. The result – her vibrant alt-pop bops.”
2020 was a standout year for UPSAHL, releasing her second EP Young Life Crisis, which Billboard crowned as one of the top 25 pop albums of 2020. Earlier in the year, UPSAHL undertook her first co-write on “Good in Bed” for Dua Lipa’s GRAMMY Award winning blockbuster, Future Nostalgia, and recently lent her pen to Madison Beer on her fiery single “BOYSHIT,” as well as Mike Shinoda’s upbeat anthem “Happy Endings,” which features her and iann dior. Complete with throwback alternative vibes, femme fatale charm, and her signature unfiltered lyricism, UPSAHL’s new single “Douchebag” is out now. It marks the first single off of her highly anticipated full-length debut album due out in Fall 2021.
Connect with UPSAHL
Website
Instagram
Twitter
Facebook
YouTube
TikTok