Taylor Mosby in THE LAST OG 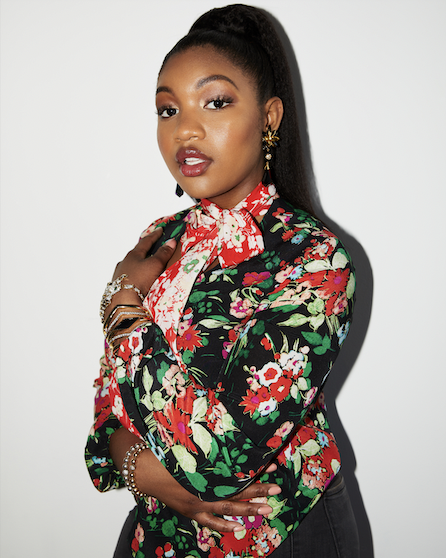 Absolutely obsessed with this shoot and interview with the talented Taylor Mosby. Climbing the ladder to success in the world of entertainment, she spoke with us at BELLO about her experience on THE LAST OG, her upbringing, and more. Starring on THE LAST OG has been the adventure of a lifetime and there are so many amazing stories to share but that could take all night,… Staying true to who she is, Taylor is a bright light in this world.

What does starring in “The Last OG” mean to you? Why were you drawn to the role?

– Starring in The Last OG means a lot to me. I was drawn to Amira because she was an articulate, direct girl who never took “no” for an answer. She takes care of her stuff and the people around her, and will always put in the work to find out what she wants to know. I also loved the fact that I’d be playing the daughter of two incredible comedians, Tracy Morgan and Tiffany Haddish. When I was reading for the role I was freshly fourteen. I am now nineteen years old, and I never would have guessed that my high school years would take place in the heart of New York City alongside the funniest people I had ever met. The Last OG has been such an exciting adventure for me. I have learned so much and I have hundreds of wild and funny stories to tell from these last five years but if we get into those we’ll be here all night!

Onset, what was one of your favorite scenes to film and why?

– One of my favorite scenes to film was the graduation scene in season four. I had finished my last day of high school while we were filming. It was a very sentimental scene for me, and everyone on set made sure to make me feel special by bringing graduation gifts and giving speeches in between takes! It is without a doubt a moment that I will cherish forever because it is such an irreplaceable experience. To graduate on a set of graduation alongside every set department that watched you grow up. It was pretty surreal.

Who is someone you connected with strongly and why?

– Dante Hoagland, who plays my twin brother Shazhad, the two of us have connected strongly over these last four seasons as if we were truly siblings. Since we are the only kids on the show, we were the only ones doing schoolwork while filming. We spent lots of time with our tutor creating inside jokes and documenting what goes on behind the scenes. We both want to direct so whenever we weren’t in a scene that was being filmed, we would stick around and take notes on the director and I would shadow on my days off. We grew up on this show together and I gained a real brother from a TV brother. 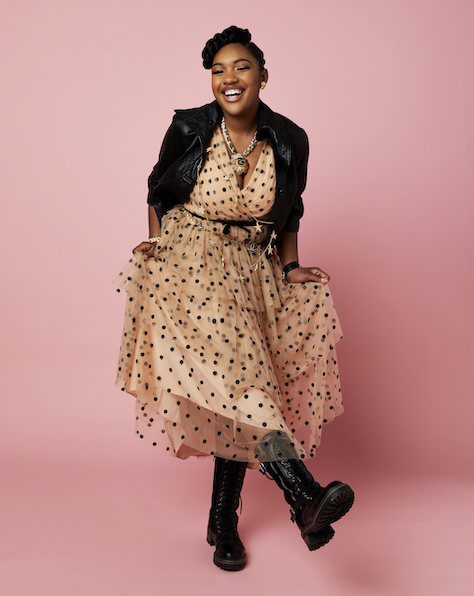 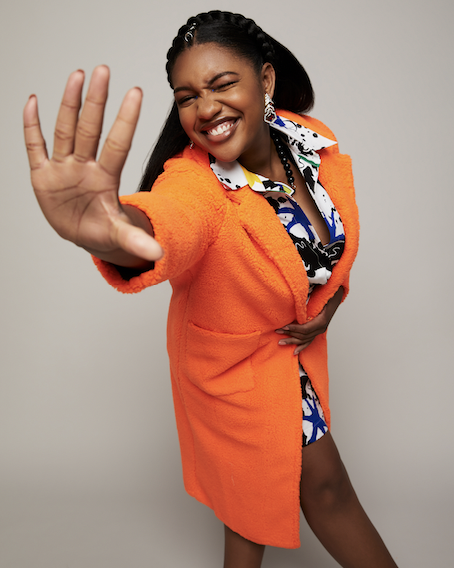 How does your character resemble you? Differ from you?

– Amira and I are pretty much the same in our personalities. She is a bit rougher around the edges than I am, but we are both outspoken overachievers with lots of ambition and a long list of goals. We both share the same craving to lead, and we both take care of our families, even when we don’t feel like it sometimes. Amira differs from me in her bluntness. She’s way more straight-up about things than I could ever be. She will confront you quickly, no matter your age. I never had that ability to confront people like that, but I did kind of learned how to from her!

In what ways have your other roles brought you to being who you are today?

– One of my most shaping experiences with a role was Chayla in Breakthrough. That was my first time playing a real person and for the first time, I had to look into someone’s life and emulate them as best as I could I actually met and talked to the real Chayla. That experience, in particular, reminded me that the world of TV and film is quite literally the art of storytelling and bringing the stories of others to life. As corny as it sounds, that experience changed my perspective on both my career and my life. It drove me to write more of my scripts once I realized that the stories that could be brought to life may be held within the people around me. Since then, most of my following roles have fed the craving for variety, from playing a college student to a superhero! My dream is to have an extremely colorful resume, mostly because with every role I discover and gain a new piece of myself.

Growing up, what is a hobby/passion of yours that held an important place in your heart? Is it still a passion today?

– Making music has always been a passion of mine. I started singing when I was a toddler and when I was big enough to reach our piano bench I started playing that too. I started my CD/Vinyl collection when I was about nine years old, and now I have ten years’ worth of CDs and Vinyl from countless genres of music! It’s one of my prized possessions. Yes, music is still a passion of mine today and I write a new song pretty much every week. I sit at my piano during any free hour I have and try to head to the studio on my free weekends. In the past, I was too afraid to release my music because I was scared of judgment, but now I’ve reached a place where I would simply be sharing my art for myself and for anyone who related to my music. I write for other people now and then so you might see my name in the credits of some songs by the end of this year!

In face of adversity and challenges, how do you go about it?

– In all honesty, I struggle with facing adversity. I don’t have much of a warrior story as an answer but I can say that I try my best to remind myself of who I am and who came before me. In this industry, sometimes it seems you’re never fully prepared for the challenges that present themselves, but I just have to remind myself of the challenges that were faced by the people I look up to and remember that if they can get through it, so can I.

If you could embody anyone for a day, who would you pick and why?

– Without a doubt, I would choose Zendaya. I feel like my reasoning is going to sound very teenager-like of me but I just want to know what it’s like to wake up as Zendaya. Someone who needs only one name to go by. To get out of bed in the morning as a woman who practically holds the entire world of entertainment in her hands at such a young age. Just imagine having her contacts for a day. I’d be having a group FaceTime call with Drake, Ariana Grande, and Viola Davis within my first hour. I’d be trying on all sorts of custom clothes just because I could! Answering this question got me very excited about something physically impossible, let me calm myself down. 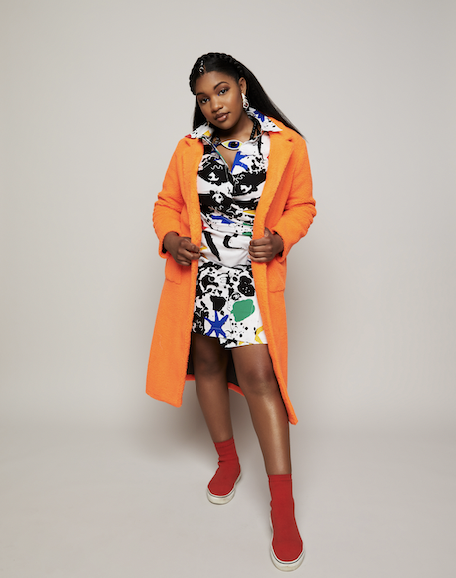 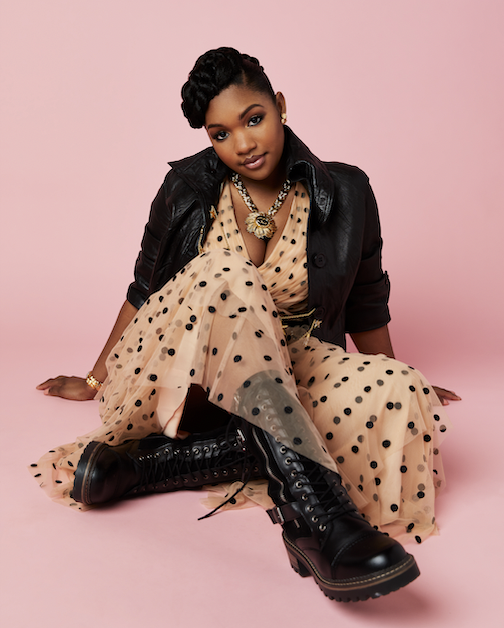 What does beauty mean to you?

– In my opinion, beauty is hardly physical. I think beauty is something you feel that comes from inside, similar to confidence, if not the same thing. When I feel comfortable and confident in my skin and my clothes, I feel beautiful. You can almost always tell when someone feels beautiful because of their radiance and energy! I believe there is a difference between feeling beautiful versus looking beautiful. The two can coexist, but they are different. Unfortunately, with today’s unrealistic beauty standards it can be hard to “look beautiful” (subjective) and feel beautiful simultaneously. I am, however, seeing some groups taking action and breaking beauty standards by bringing forward more inclusive representation, clothing, makeup, hairstyles, and so much more, which is incredible because that allows for more people to no longer have to confine themselves to a certain norm, but find a space for themselves where they feel comfortable, confident, and truly beautiful!

– Yes! I plan on releasing some music this year! I’m super excited to finally open up that chapter of my life. Music has always played a huge role in my life, and I am finally ready to release some of my songs. You never know how it will go until you try, you know? I also plan on filming one of the short films I wrote this year! Lots of new things on the horizon for 2022 that I am super excited to share with the world!