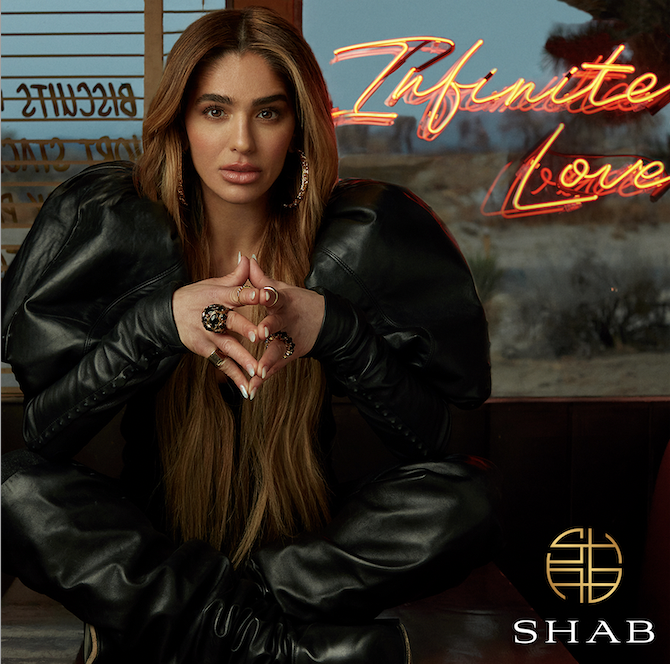 With her INFINITE LOVE album debuting on February 12th, SHAB pairs urban tilting melodies with power pop sensibilities to deliver a knockout inaugural effort. With her remarkable debut, SHAB conjures a kaleidoscope of dance beats that go hand-in-hand with her introspective and powerful lyrics. The eight songs of the INFINITE LOVE album blend an eclectic mix of sonic effects with catchy dance-club hooks towards synthesizing an energizing Global Pop that is both effortless and memorable.

Love, pop culture homages and of course global dance grooves mark the sound of this gorgeous and vivacious singer/songwriter, who made her English language debut during February 2020 via the ode to female wildness, Spell on Me. Helmed by Grammy-winning producer Damon Sharpe (known for his work producing Ariana Grande, Jennifer Lopez and more), Spell On Me serves as the lead-off single for SHAB’S upcoming introductory English language album, INFINITE LOVE, to be released during February 2021. Incredibly enough for a debut single, Spell On Me peaked at Number Two on the British Commercial Pop Charts during November 2020 — and actually reached Number One on the Global Digital Radio Chart during October 2020. Now having captured the attention of fans across the globe, SHAB has set her sights on America with the December 2020 release of What I Do, the second single from her upcoming INFINITE LOVE album. Both a power ballad and dance floor anthem, SHAB’S lyrics harness anguish and devotion in tandem with the catchy and lush rhythms of What I Do towards documenting her journeys of femme self-discovery.

Through rhapsodic lyrics and dance beats, this Iranian refugee and mother of two children living in Dallas, Texas has captured the attention of girls around the world.  At 41, she’s become a breakout star of the pandemic, please see the stunning video here: “What I Do” Music Video Link

The mystical pop-leaning “What I Do” single and music video was helmed by Grammy-winning producer Damon Sharpe, who is known for his work producing Ariana Grande, Jennifer Lopez and more. Featuring a steady stream of feel-good hooks, SHAB draws on her own romantic torment, crafting raw lyrics to her lover and heartfelt reflections on surrendering herself to intimacy. Through power ballads and dance floor anthems with the upcoming album, SHAB harnesses anguish and devotion, as she traces journeys of femme self-discovery.

This mother of two has spent the last few years gaining a loyal Persian fanbase around the world, establishing herself as a pop goddess with purpose. Her first “Spell on Me” music video alternates between playful and surreal. An eclectic mix of sounds ring throughout her new album as she opts for a mix of urban tilting songs, pop ballads, and dance inducing knockouts. She combines and energizes familiar dance-pop sounds to make music worth getting lost in. With effortlessly huge choruses and distinct yet unpredictable vocals that’s eccentric in the purest of pop sense. SHAB delivers a kaleidoscope of sound that goes hand-in-hand with the lyrics.

One thought on “SHAB Set To Release INFINITE LOVE”