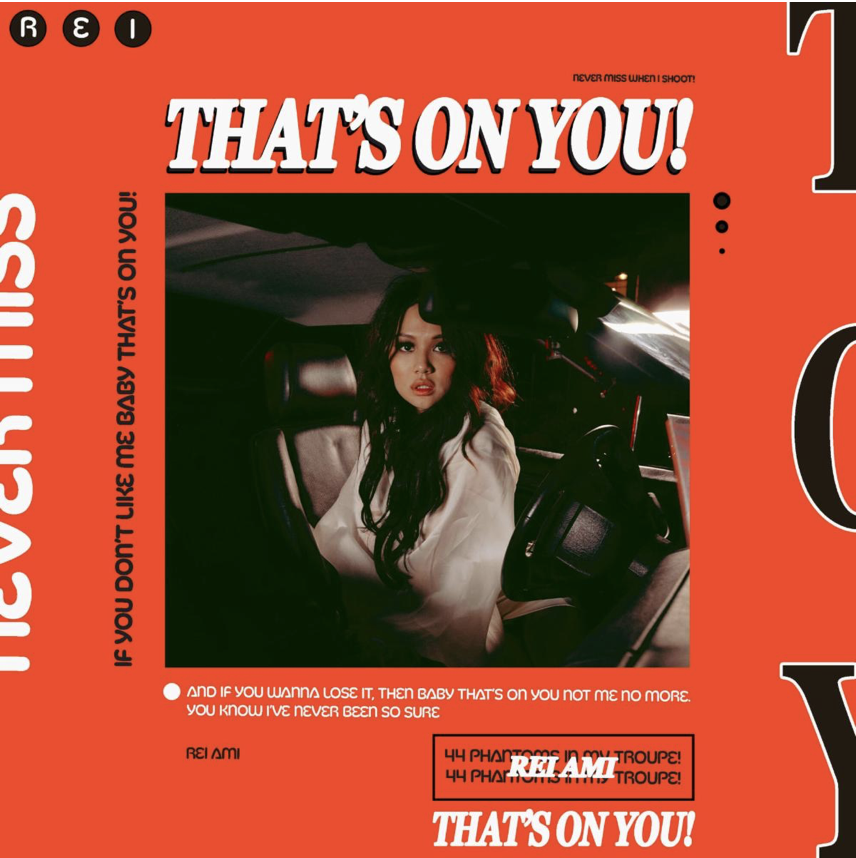 LATEST FROM HER FORTHCOMING MIXTAPE
DUE OUT THIS SUMMER
WATCH HERE :: LISTEN HERE
Alt-pop singer and songwriter, REI AMI, has delivered a standout new track and video for “THAT’S ON YOU!” available now across all digital streaming platforms via Visionary Records/Sony Music Entertainment. Co-written and produced with longtime collaborator Elie Jay Rizk, REI AMI’s range and versatility is on full display as “THAT’S ON YOU!” opens with a fierce yet playful rap verse before seamlessly transitioning into a soft captivating pop earworm.
The accompanying music video, directed by Kristen Jan Wong (Charli XCX, Nasty Cherry, Grace McKagan), also premieres today HERE and portrays the fast rising musician as part of a bounty hunting duo who eventually seeks revenge on her partner in crime. “THAT’S ON YOU!” follows REI AMI’s first release of 2021, “do it right” featuring rapper Aminé, and is the latest off her forthcoming mixtape due out this summer. LISTEN HERE // WATCH HERE
On the inspiration behind her new single, REI AMI shares, “THAT’S ON YOU!” is about recognizing your power again. It’s about being yourself to the fullest extent and if others don’t like it, then that’s their problem. I exist for myself and myself only. I refuse to dull myself down to make others comfortable. So if you don’t like me, baby that’s on you.”
Born in South Korea and raised in Maryland, REI AMI commanded herself into the spotlight in 2019 with the release of her three multi-faceted debut singles “MAKE IT MINE,” “DICTATOR,” and “SNOWCONE,” the latter of which has since amassed over 15 million cumulative streams. Backed by co-signs from Billie Eilish, FINNEAS, and Zane Lowe, REI AMI continued to make waves with the eye-popping 2020 rap single “MAC & CHEESE,” released via her new label Visionary Records, which led to a highly coveted spot walking in Rihanna’s Savage x Fenty runway show that same year.
Darkness of human existence is often side-stepped. #REIPOP newcomer REI AMI, however, balls up her fists and unleashes her demons across the breadth of her new work. REI AMI exhibits great strength in poetic tragedy, as she so often stokes the flames of moody melancholy, excavating what beauty may lie underneath in the process. Her craft is as blissful as it is devilish, and she instantly casts a mesmeric spell over the listener — heightening the senses and provoking them to question their own well-being.
Her name is a combination of two characters from the lauded anime series Sailor Moon; REI represents her softer, more delicate side and AMI showcases her braggadocious and aggressive “bad bitch” style. REI AMI best reflects the two polar sides of her personality, while also representing duality. For her, it’s not having to choose between this or that, but rather embracing both and then modeling that in her music.
A vast background of sensibilities, REI AMI is a chameleon in every sense and unafraid of saying exactly what’s on her mind. With new music on the way incorporating elements from indie, hip-hop, to bedroom pop and every genre in between, she is poised to continue her rapid rise to stardom in 2021 and beyond. Pop music isn’t ready for what’s coming next.
Stream REI AMI’s latest single “THAT’S ON YOU!” available now HERE.
Watch “THAT’S ON YOU!”
YouTube
Listen to “THAT’S ON YOU!”
Pivot Link
Watch “do it right” (feat. Aminé) [Lyric Video]
YouTube
Listen to “do it right” (feat. Aminé)
Pivot Link
Follow REI AMI
Instagram
Twitter
TikTok
Facebook
Spotify
YouTube
SoundCloud