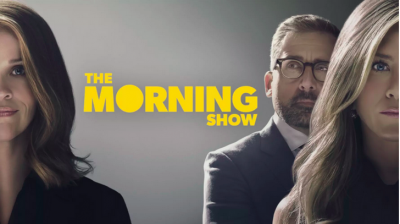 The long awaited series is starred in and produced by our favorite Hollywood ladies, Jennifer Aniston and Reese Witherspoon. The Morning Show will be making its debut on Apple TV+, the first all original subscription service, on November 1st. Last night, they rolled out the black carpet at NYC’s Josie Robertson Hall and David Geffen Center to celebrate the global premiere of the show. The key players of the series Aniston, Witherspoon, and Steve Carell walked the carpet alongside a mix of real life morning-show reporters, including Brian Stelter.

Stelter’s book “Top Of The Morning” was the inspiration behind The Morning Show and he served as a consulting producer during filming. “It’s incredible that Apple is launching a streaming service with an ode to broadcast TV,” Stelter told Variety. “There’s something special about that — it actually speaks to the enduring power of morning television and that no matter what changes in television or in streaming, people still want to turn on the television and see someone they trust and someone that they like.” With Stelter’s help, the show will stay true to the real atmosphere of the morning news world.

With real life scandals taking place on our own morning show screens, The Morning Show comes at a perfect time to explore #MeToo, ageism, gender inequality, and more. Jen and Reese play two morning show hosts navigating the complicated world of broadcasting while dealing with personal and professional crises. The drama exposes the cutthroat dynamics of morning news and takes on a lot of relevant topics with an allstar cast. To watch, you must subscribe to Apple TV+ which will be available on all of your Apple products and smart TV’s starting November 1st.