Paul Rudd Stars in Living With Yourself 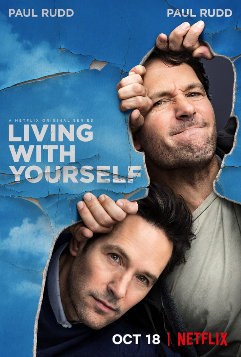 The new Netflix comedy, Living With Yourself, stars Paul Rudd…and Paul Rudd. Who knew that one Paul wasn’t enough? In the recent Hollywood theme of cloning, the show will follow Miles (Paul Rudd) as he learns to live with his clone. Miles is a 40-something suburban finding himself in a midlife crisis. His co-worker recommends him to a special spa treatment and he suddenly feels like a new man. That is because he literally is a new version of himself, just happier. As you can tell by the title of the show, the two Mileses are no doubt going to meet and we will see how the rest plays out.

As Netflix knows best, the show was designed to be perfectly bingeable. Season one has just 8 episodes at 26 minutes each. Written by Timothy Greenberg and directed by Jonathan Dayton and Valerie Faris (Battle Of The Sexes, Little Miss Sunshine), the show is carefully cut to run smoothly and split airtime between both versions of Miles. The show deals with some dark concepts, including depression and marriage problems. Overall, though, it’s a comedy and we will see both Paul Rudd’s dealing with these issues in only a way the goofy actor can do.

It was difficult to adjust to acting against himself and using a lot of green screen, Rudd said in an interview. The show is also a reminder as to how talented an actor he is, which many may have forgotten since Ant-Man and his many other comedy roles. Miles is a dark role, and Paul Rudd plays serious until he has to turn on the charm for the other Miles. Before I give too much away, you can start bingeing Living With Yourself on Netflix today!