ON: September 24, 2020 BY: Alexandra Bonnet OBSESSIONS 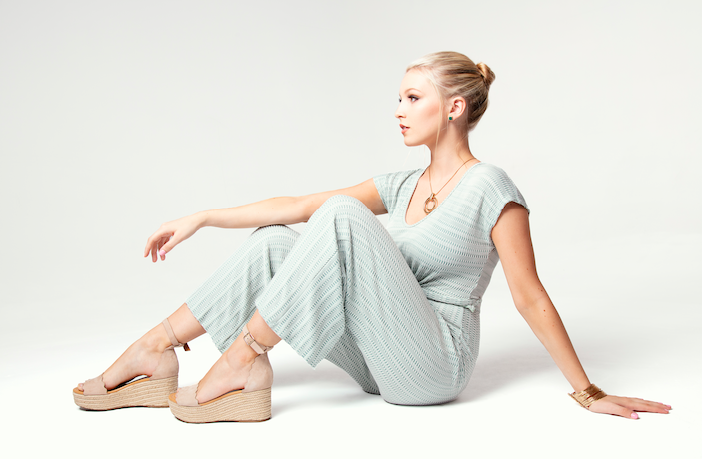 Starring on Netflix’s infamous series, “Ozark,” Madison Thompson spoke with us here at BELLO on her career as an actress, experience on set, and more! Pursuing a Business Degree in Cinematic Arts, the talented actress brings to you beauty and brains. On and off screen, her spirits beams as she makes her way through the entertainment industry. Making sure to give back when she can, Thompson remains humble as she knows there is a “self-centered nature of the business.” Truly inspiring, Madison Thompson reminds us of what truly matters!

Did you grow up wanting to become an actress?

Not really, but I think it was fate! I was fortunate enough to grow up partially in New York City, where I was surrounded by the theater community from a young age. Acting has always been a part of my life, but I never realized it could be an actual career. I would put musicals on in my bedroom and participated in children’s theater, but it was always just a way for me to have fun and release my creativity. It wasn’t until the entertainment industry started booming in Georgia, where I also grew up, and I booked a few small commercials that I realized that I could do something I loved as a job.

What are you studying in Los Angeles? How do you balance your professional and student life?

I am currently pursuing a Business Degree in Cinematic Arts at the University of Southern California. This degree will help me learn about the financial and producing side of the Entertainment industry, which is really interesting to me. Balancing my professional and student life, however, has not been easy! But living in Los Angeles definitely makes navigating both aspects of my life easier because the commuting time between campus and many of the local studios is so short. My biggest trick is finishing schoolwork as far in advance as possible. Shooting schedules and audition opportunities are constantly changing so I must have space available in my schedule. If my schoolwork is done, I have more time to focus on the script in front of me.

How did you audition for your role in “Ozark”?

I first auditioned for Ozark a couple of years ago, for a small role in season 1. One of my close friends booked the role and I ended up watching the show to support her. That was my first real exposure to Ozark. Also, the amazing group at Feldstein|Paris who casts Ozark had booked me on several other tv projects. Eventually, I finally received another opportunity through that casting office to audition for the show. When I read the character breakdown, I immediately ran to my mom and told her I thought I would book this role. It was perfect. That was honestly the first time I had ever felt that way about a role before. 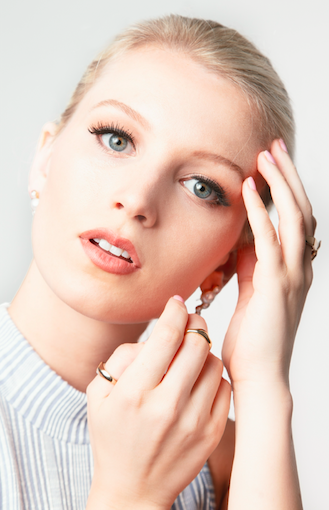 I went and put myself on tape. The show ended up not having a callback or producer round and I ended up booking off of that one audition tape. It was a very quick casting process. And the rest is history!

What do you believe viewers should feel/think when watching Season 3?

The stakes in season 3 are higher than they have ever been before. What is different in this season is that the biggest threats are closer and more personal than ever. They are family. Audiences should always be open-minded when watching Ozark because you never know what will change at the drop of a hat.

Do you identify with your character “Erin”?

I do identify with my character Erin in some ways and not in others, which I guess is the beauty of being an actress. I related to Erin in the fact that in the same way she was new to the Ozarks, I was new to Ozark. Joining a cast on the third season meant observing and understanding how the cast and crew worked together and then assimilating as well as possible. Luckily, the cast and crew of Ozark made my job MORE than easy. They welcomed me with open arms. In other ways, I did have to rely on my acting to navigate the character of Erin. She is very rebellious and blunt, especially with her mother. In real life, if I spoke to my mom the way that Erin speaks to Helen, I would be in big trouble.

How was your experience shooting season 3? Share us some anecdotes about the shooting.

I had such a lovely time shooting season 3. Working on the show felt like summer camp. Of course, there is always a lot of hard work, organization, and focus that goes into making everything run smoothly. Nevertheless, the cast and crew are all having a blast at the same time.

One of my most vivid memories from the set was shooting one of the beach scenes where Jonah shoots Tommy’s beer bottles. The scene was made up of a bunch of different mini scenes between characters and had to be precisely choreographed since firearms were being used. We practiced the scene all morning and started shooting once the sun finally came out of the clouds. Since we were on the sand, the director and cast decided to shoot the scene without shoes on. When we all came back from lunch, we quickly found out that the sand was now blazing hot. To finish the scene without shoes, we had to spray the ground with water in different spots to keep moving! It was so amusing to watch because everyone was just hopping like bunnies around from cool spots to cool spots instead of walking around like normal people. Luckily, we were able to finish the scene safely and the editors chose shots for the final cut that didn’t make us look like we were jumping all through the scene.

How did you react when you learned that the series had received an Emmy Award?

I found out that Ozark had won two Emmy awards while I was waiting to have an interview for the Women in Cinema Club at USC. I watched the live stream on my phone while in the waiting room. When they announced Julia Garner had won the Emmy for Best Supporting Actress, I (naturally) freaked out and started jumping up and down. All the girls around me looked so confused about my sudden excitement. Obviously, I did the exact same thing when they announced Jason Bateman had won for Best Director. Jason, Julia, and so many other members of our show are such hardworking individuals and more than deserving of the accolades they received that evening. The best part about Ozark winning Emmy’s this past year was the fact that we were still shooting season 3 at the same time. So when the Emmy’s finished, everyone returned back to Atlanta and celebrated together as a family.

What did you learn from working with actors like Jason Bateman, Laura Linney, and Janet McTeer?

Not many 19-year olds get to undergo an acting education from some of the most talented performers of our generation. I feel extremely fortunate! Getting the chance to work with Jason Bateman as both an actor and director was a once in a lifetime experience. He is so knowledgeable and passionate about cinematography. I felt so inspired watching him both direct and act in the same scene. It makes me want to follow in his footsteps one day behind the camera.

Playing Erin also meant that I spent a lot of one-on-one time working with Janet McTeer, who plays my mother (Helen)  this season. Janet taught me not only about being a giving actress, but also a good human being. She is by far one of the most amazing actresses I have had the pleasure to work with. 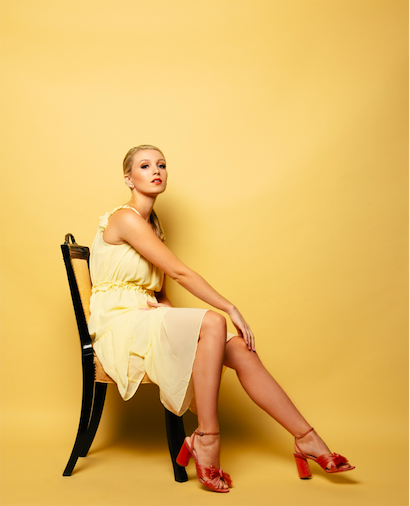 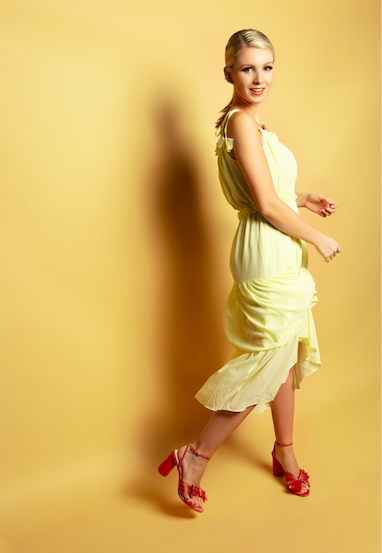 What can fans of the series expect next?

So far, we have not been officially picked up for a fourth season yet. If that does happen, however, I know fans will have a lot to look forward to because many, let’s just say, “issues” have been left unresolved. I would hope that fans would get a lot more explanations with a new season. But hey, that is really up to the writer’s room. I am keeping my fingers crossed just like the rest of the fans!

Why did you choose to support the Foundation for Hospital Art? What are your missions?

Working in the Entertainment industry can be hard at times because of the self-centered nature of the business. That is why I like to spend my free time volunteering for and sharing the message of the Foundation for Hospital Art. It is a non-profit organization that has been the preeminent force over the last 30 years in softening hospital and shelter environments with colorful paintings, murals, and ceiling tiles. During quarantine, I have helped finish final paint touch-ups on many canvases that will then be shipped to healthcare facilities around the world. I have also used my voice on social media to connect with families in my community so that they can volunteer during this difficult time.

Do you have a message to convey about the FFHA?

What is great about FFHA is that it gives people the ability to volunteer and make a difference from the safety of their homes. You can social distance and make a social difference! I love supporting this organization because of the message they spread about the positive effect art has on healing lives. Being a part of the arts community in general has changed my life and introduced me to so many incredible, inspiring people. FFHA brings people together by helping others.

What have you accomplished during this confinement?

During confinement/quarantine, I have been working on embracing self-time. Before the COVID-19 pandemic, I was always quick to oversubscribe myself with constant activities and consequently spread myself very thin. I always put work before my own personal time. Being in quarantine and all the extra free time that comes with it has taught me the importance of personal time. Hopefully, when we can transition back to a somewhat normal world one day, I can take my lessons from quarantine and implement them in my daily life.

If I were Aladdin, what dream would you like to achieve?

One of my biggest dreams has always been to play a superhero in a TV show or movie. Growing up, I always watched Marvel and DC Universe. I would love to get to train and do my own stunts for production and work with green-screens/CGI technology. I think taking on the role of a superhero would push me physically, mentally, and emotionally as an actress.