ON: December 6, 2019 BY: Alexandra Bonnet OBSESSIONS 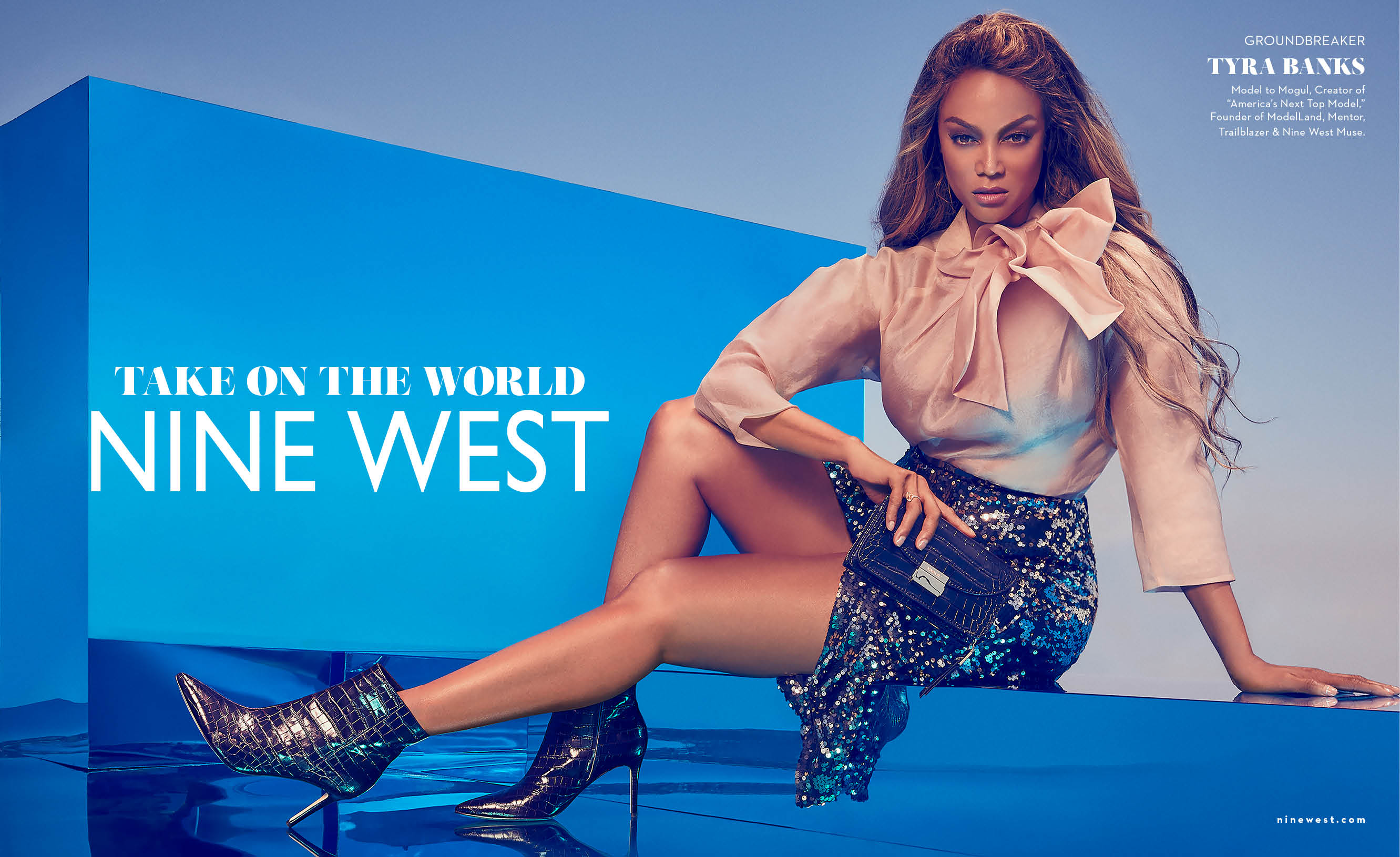 On September 4th 2019, Authentic Brands Group (ABG), the global brand development, marketing, media, and entertainment company, announced Tyra Banks as the global ambassador for the Nine West brand. From infamous supermodel to business mogul, the beautiful Tyra Banks is now the voice and the face of Nine West’s global campaigns.

“Since acquiring Nine West last July, ABG has been focused on restoring the brand to its former greatness and Tyra is the perfect partner to amplify Nine West’s modern message of celebrating women,” said Natasha Fishman, EVP Marketing of Authentic Brands Group, owner of Nine West. “Tyra is both aspirational and inspirational and her drive, style and all-around fierceness are unmatched! We are thrilled to bring her voice and modern, feminine attitude to Nine West audiences around the world.”

“For years Nine West has helped women from all walks of life look amazing from the ground up,” said Banks. “It’s both inspiring and exciting to partner with a brand that is committed to empowering the modern woman and giving her the confidence to take on her nine-to-nine lifestyle in the fiercest fashion.”

As global brand ambassador and a highly visible figure who has been an advocate for empowerment, Banks has been elevating Nine West’s mission and campaign messages, acting as a beacon for the female spirit. This past October, Nine West unveiled its fall campaign, entitled “Groundbreakers.” The brand also continues to roll out supporting initiatives throughout the season, honoring and showcasing the power of women.
———
About Nine West
Nine West is a global lifestyle brand that empowers women to take on the world in style. It is defined by timeless, feminine style; translating key trends into wearable and attainable collections of footwear, apparel, and accessories. Nine West’s global footprint includes over 40 countries around the world in department stores, outlets, shop-in-shops, concessions, e-commerce, and 190-plus free-standing stores, and over 3,000 points of distribution worldwide.

For more information: Visit NineWest.com.
Follow Nine West on Facebook, Instagram, and Twitter.
————
About Tyra Banks
Tyra Banks is the content creator of our time. The Supermodel turned Super Businesswoman created and executive produces America’s Next Top Model and headlined her Emmy Award-winning talk show. Tyra is consistently ranked by Time Magazine as one of the world’s most influential people and serves as CEO of her own multimillion-dollar entertainment company Bankable Productions that inked an overall deal with Universal Television for scripted and unscripted programming.

Expanding the definition of beauty is something Tyra Banks has always believed in. Six modelling agencies rejected her before she was signed at the age of 15 years old. Now, hundreds of magazine covers and thousands of runways later, Banks grooms the next generation of models to make their dreams come true.

She created and executive produces the first and one of the longest-running, competition-based reality television series, America’s Next Top Model, with 24 cycles. 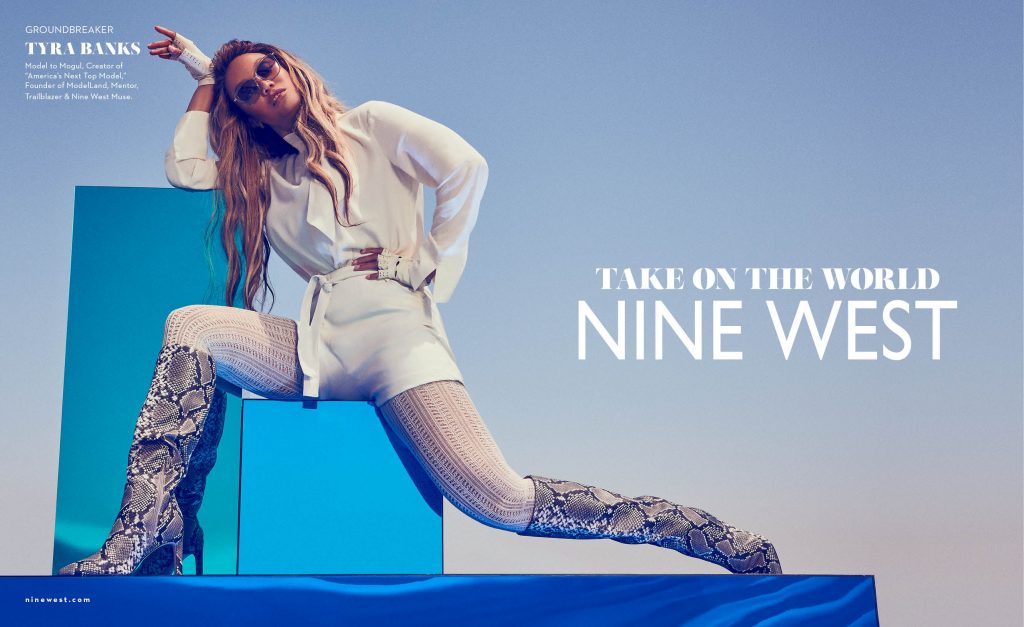 As an original Victoria’s Secret angel, Banks was also the first female model to grace the cover of GQ and the first African American model to be featured on the covers of Sports Illustrated Swimsuit Issue, which featured her for two consecutive years, and the Victoria’s Secret catalogue. She was named one of The Hollywood Reporter’s 100 Most Powerful Women in Entertainment, Entertainment Weekly’s 25 Smartest in Television, and was America’s #1 host two seasons running on America’s Got Talent. She was honored as one of Glamour magazine’s coveted Women of the Year, alongside former U.S. Secretaries of State Condoleezza Rice and Hillary Rodham Clinton.

Banks received two Emmy Awards for The Tyra Banks Show, the first show ever to receive the award in the new informative category. Her infamous line, “Kiss my fat ass!” made TV Guide’s 60 Greatest Talk Show Moments. She was listed twice on Time magazine’s 100 Most Influential People in the World and took the #1 spot on Forbes’ list of top earning women in primetime for two years in a row.

Banks is CEO of the Tyra Banks Company — a place where beauty meets entertainment. In 2012, she graduated from the Owner/President Management program at Harvard Business School. She recently developed Fierce Capital, the investment arm of the Tyra Banks Company, which invests in early-stage companies, including firms that are female-led or female-focused. For three consecutive years since 2017, Tyra shared her expertise and knowledge of personal branding as visiting professor at Stanford University Business School.

In May 2019, Tyra once again broke beauty barriers by reprising the cover of Sports Illustrated’s coveted Swimsuit Issue and succeeded in breaking the internet by driving the most traffic to SI.com in history. After 22 years, Tyra’s return to SI marks the end of her modelling retirement. She’s back with a new perspective that ‘X’s out beauty norms and a new modelling name, BanX.

About Authentic Brands Group
Authentic Brands Group (ABG) is a brand development, marketing, and entertainment company, which owns a portfolio of global media, entertainment, and lifestyle brands. Headquartered in New York City, ABG elevates and builds the long-term value of more than 50 consumer brands and properties by partnering with best-in-class manufacturers, wholesalers, and retailers. Its brands have a global retail footprint in more than 100,000 points of sale across the luxury, specialty, department store, mid-tier, mass, and e-commerce channels and more than 4,930 freestanding stores and shop-in-shops around the world.