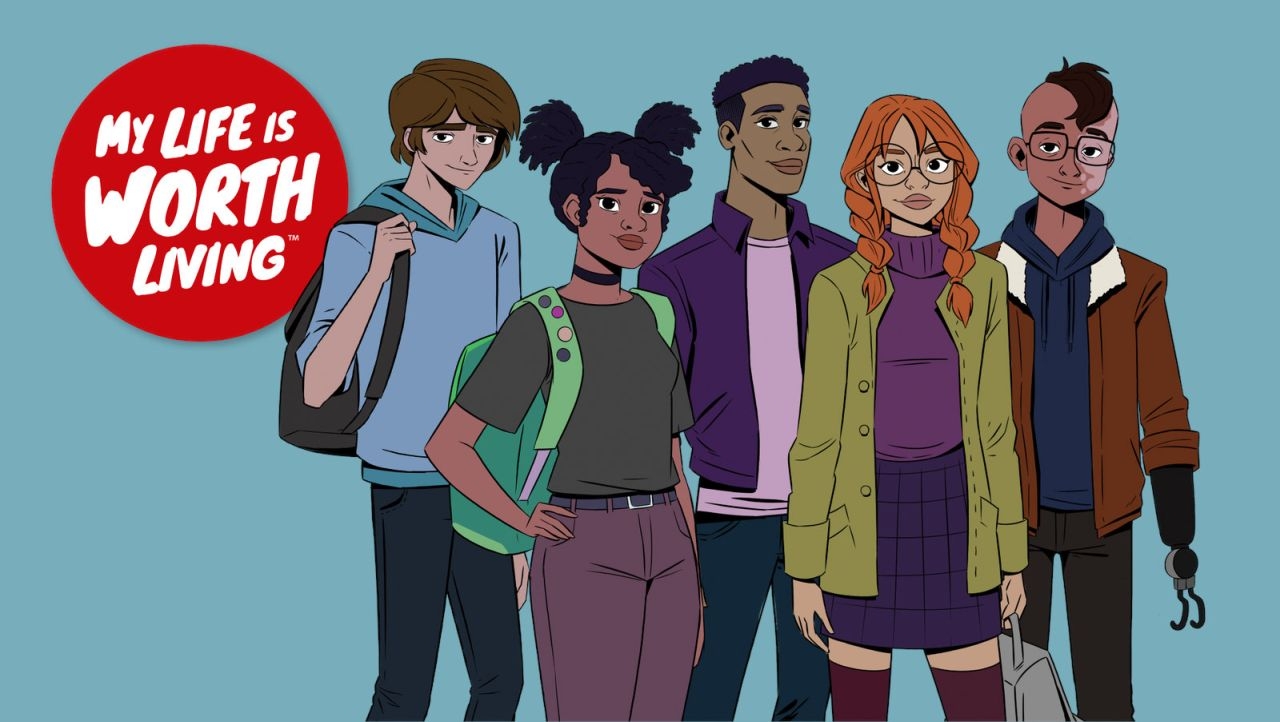 The Cook Center is a foundation which aims to support children, families, and schools in eradicating suicide, as well as offering resources and support for those with mental health issues and their caregivers. Terry Thoren, who has spent his career making cartoons like Rugrats and The Wild Thornberrys, joined forces with The Cook Center and came up with the first animated series on teen suicide ever made. The series,  “My Life is Worth Living, was made to help parents who are trying to connect with teens in regards to difficult topics around , mental health and how they are feeling.
In five powerful, diverse stories told over 20 episodes, the My Life is Worth Living series models behavior for teens struggling with suicidal thoughts. The series was created to support teens as well as mental health helpers such as peers, family members, teachers, and other adults. Here at BELLO, we had the chance to speak with CEO of The Cook Center, Anne Brown, as well as Therry Thoren, the creator. Mental health is no joke and it’s important to remember that there are resources out there! Take a look…

Share with us the story of “Cook Center’s” establishment.

The Cook Center for Human Connection is a Utah-based non-profit that was founded by Greg and Julie Cook. The focus on mental health and suicide prevention comes from their own experiences raising raising five children, and comforting each of them at different times because of a friend or classmate who died by suicide or attempted it. This led them to make youth mental health and suicide prevention one of the major pillars of their giving. The Cooks were early supporters of the new Primary Children’s Medical Center in Lehi, Utah, focusing their donations on childhood mental wellness and behavioral health. The Cooks continued their mission by helping Utah’s Lieutenant Governor, Spencer Cox, with his statewide suicide awareness campaign, which led to the foundation of the Cook Center.

What was the primary goal and how has it evolved since then?

The mission of the Cook Center is to bring together the best organizations, programs and products to prevent suicide, provide mental health support, and enhance the human connections vital for people to thrive. The foundation has developed resources, most available for free, for teens, parents, and educators. These resources include My Life is Worth Living™, the first animated series to address teen mental health, which was designed to jumpstart conversations between teens and parents about mental health challenges and suicidal thoughts. To destigmatize talking about mental health and empower adults to respond to their teens’ struggles. In addition, the Cook Center offers an array of resources at ParentGuidance.org to help parents help their children through difficult mental health and life challenges. The Cook Center for Human Connection also provides direct grants to organizations to fund good work being done in the space of youth mental health and suicide prevention such as 50 Hope Squad schools nationwide and schools wanting to implement Choose Kindness to change their culture to a culture of kindness. To create a global change, the Cook Center for Human Connection resources are provided in multiple languages such as Spanish, Mandarin, Japanese, and Portuguese..

Can you tell us more about what the foundation means to you?

I think Greg Cook says it really well: “We are engaged in mental health, not just suicide prevention. We want to get to the root of the pain. Loneliness is the greatest enemy, right now, to our emotional and physical health. The antidote is deep, meaningful human connection and relationships with people. Our societal landscape, technology, and demographics are continuously changing, and we need to keep up. Our mission is to not only erridcate suicide completely, but provide resources to help humans know they are not alone.”

My job is multifaceted, and like the Center itself, is all about human connection. I spend time working with our therapy teams, developers, creators and animators to ensure that we have excellent resources to share with the world, such as schools, other non-profits, and parent organizations, to help them start or continue using these resources. It is important that people know about them and find them useful, so it is a continuous effort to make sure these assets are there for whoever needs them to start a conversation within teens, their peers, and trusted adults.

Whether it’s a teen going through a mental health challenge or the parent supporting that teen, the single most powerful message is, “You are not alone.” So many teens are struggling that the U.S. Surgeon General has issued a statement and report calling youth mental health “a national crisis” that has been amplified by the pandemic. A 2020 survey conducted by the CDC found that 40% of people were struggling with a mental health issue, with young people and racial/ethnic minorities most at risk.

For parents, translating “you are not alone” into action means connecting with your children. Spending time together is important, but parents also need to know how to start those difficult conversations if they can see that their child is suffering but don’t know what to say. One of things I’m proudest of when I watch My Life Is Worth Living is that it models, in a way that any parent can follow, how to get started having those conversations. Yes, they are uncomfortable, but they could save a life.

Do you have any personal experiences that help you relate to these teens? Are you comfortable sharing one?

I was raised with a father who struggled with alcohol and was bi-polar. His first experience in a mental hospital was three years before I was born. My earliest memory is being three years old and fleeing on foot in the middle of the night with my mother and two brothers to an aunt’s house about a mile away. We didn’t want to start the car because we didn’t want him to know we were gone. Although that was my earliest memory, my father and mother stayed together until he died about 15 years ago. So this wasn’t the first or last time I had these experiences. My grandfather, my father’s father, died by suicide. Mental health needs have been part of my life from the beginning.

My career prior to working on mental health and suicide prevention two years ago had all been as a teacher and as a leader in edtech. Throughout my career, I have watched and supported families and students who struggle with mental health. At first, I wondered if I had a voice in this work. Then I remembered that in my life I have literally dealt with mental health issues of loved ones and family members and friends since before I was born. So, my perspective comes from a very real and practical space of what do people need who are trying to help others.

Where do you hope to take the foundation next?

We’re always looking to connect with as many school districts and other partners as possible so that we can reach as many parents and teens as we can. Our ultimate goal is and always will be to save lives.

You have created the first animated series to address mental health for teens. What prompted you to do so?

As the former CEO of Klasky Csupo, the animation studio that incubated the Simpsons and created Rugrats and the Wild Thornberrys, I know the power of animation. Fifteen years ago, my father was dying of cancer and told me I should stop using animation to sell cereal and toys, that I should use animation to help my sister, who was a special needs teacher in Colorado. She needed help managing her students’ behavior in the classroom. I asked her to tell me her four biggest problems.Then we produced four animated videos modeling the appropriate behavior for each problem. The experiment was so successful I shifted my career to use animation to model appropriate behavior in the classroom.

In what ways do you believe using animation helps more than other routes?

Animation knows no borders and is a powerful universal language that is timeless. Young people form emotional relationships with the animated characters that they come to empathize with and even love. By combining entertainment and cutting-edge technology with the guidance we received from suicidologists like Dr. James Mazza, the My Life is Worth Living animated series is an entirely immersive experience for young people that equips them with the necessary skills to manage the negative voice in their head and protect themselves and their friends.

While creating this, what were some important notions you wanted to highlight?

The first hurdle was connecting with tweens and teens where they live—which is on the internet. So all the episodes are available for free on YouTube. Every lead character has a “second voice” that speaks to that character’s negative thoughts. One central message of My Life Is Worth Living is that we all have those negative voices, but with the help of the caring people around us, we can learn ways to cope with them and live fulfilling lives.

How has animation helped you, personally?

The series has inspired me to develop a project that tells the story of my father, who overcame a traumatic childhood to become a Hall of Fame coach at Cornell University where he  mentored the lives of more than 2,000 student athletes. Reliving his story, from my understanding, and explaining his perseverance has been enlightening. Every person has a story to tell, and I have the opportunity to tell his story not only from his experience, but from my point of view, and to show how the miracle of his life made me who I am today. 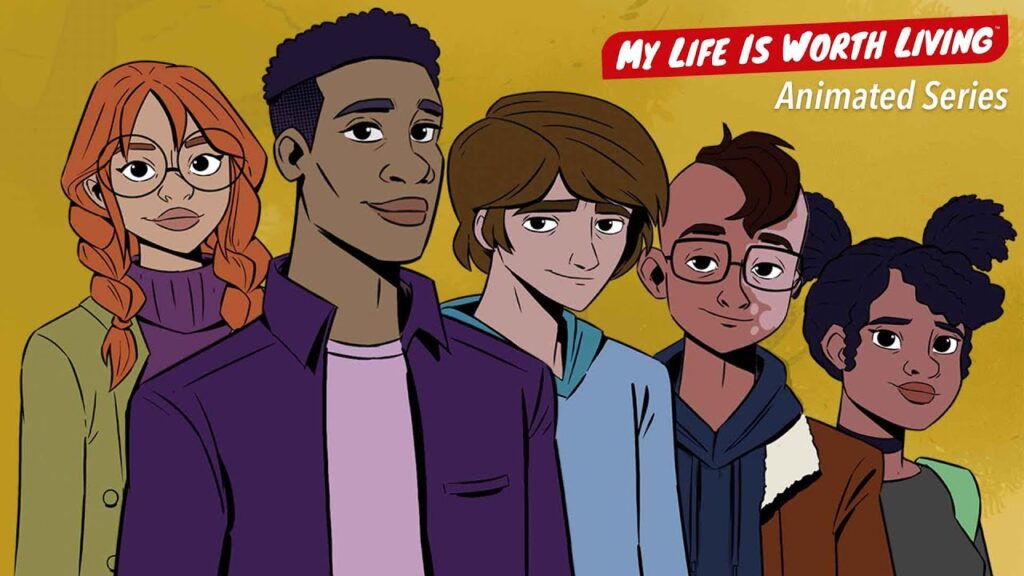 Share with us how your partnership with the Cook Center formed.

I’ve had the good fortune to enjoy a close relationship with many nonprofit organizations and their leaders who work to make a difference in the world. Greg Cook, Julie Cook, and Anne Brown are at the forefront of this movement. Their unbending passion to protect children inspires us all, to do the best we can to contribute to their vision to promote teen mental health and prevent suicide.

Do you have any personal anecdotes you would like to share that had a strong impact on your being?

I come from a family that has dealt with physical and sexual abuse, and I have witnessed firsthand how they have lived with this trauma. My own experience has taught me that each person’s story is valid and powerful. Each story makes you more aware about the world we live in and the struggles people face every day. If someone comes to me to tell me what an impact My Life is Worth Living made on their life, it’s incredibly fulfilling and confirms my belief that producing this series was worth the sacrifices it took to get to where we are today.

Any advice you would like to give to teens having mental health struggles? And any advice for those around them?

For teens, my advice is to find someone you trust who you can talk to. For the people around them, my advice is to be that person a teen can trust. This series was created to ignite a conversation and offer hope. No matter your age or experience, we all struggle with negative thoughts, and by reaching out for help, we have the ability to keep our negative thoughts away.