KYGO TEAMS UP WITH DNCE FOR NEW SINGLE “DANCING FEET” 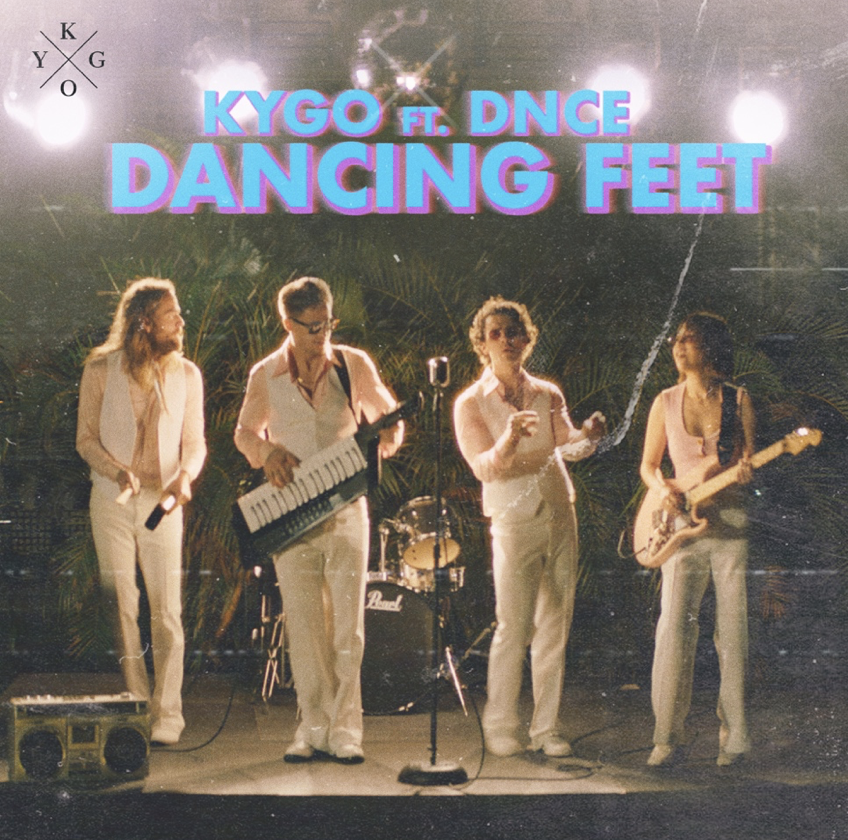 The vibrant, funk-fueled collaboration serves as the first taste of new music from Kygo this year and marks DNCE’s anticipated return to music since their last release in 2018. Earlier this month, Kygo and DNCE celebrated the release at the Sports Illustrated x Palm Tree Crew Super Bowl party in Los Angeles, where they performed together for the first time.

Released with the single is the official music video, directed by Johannes Lovund. The playful visual sees Kygo and DNCE frontman Joe Jonas channel Miami Vice as they cruise the sun-soaked tropical city, working by day at The Palm Tree Resort and losing their inhibitions on the dancefloor at night.

“Joe and I met years ago in Las Vegas and have wanted to find the right song to work on together for a while,” says Kygo.“When I started working on ‘Dancing Feet’ with David Stewart, it immediately felt like a special song. He had previously done a few records with Joe and both of us felt he could be the perfect fit for it. A few weeks later Joe and I were in the studio together in LA and finally had a song together that we both really loved! It was also great to have the chance to shoot a fun music video in Miami with DNCE and perform the song with them during Super Bowl weekend.”

“We first met Kygo when we did some shows together in 2016. We’re excited to collab with him for the first time on ‘Dancing Feet’ and share this song with the world and lean into our funk & disco influences,” says DNCE.

Whether behind the piano in his studio or headlining a sold-out festival, Kygo quietly reaffirms his status as a prodigious talent, forward-thinking producer, dynamic DJ, and influential global superstar. The Norwegian musician born Kyrre Gørvell-Dahll first introduced himself in 2013 and quietly became one of the most ubiquitous hitmakers in the world. Amassing 23 billion cumulative global audio and video streams by 2022, he has broken numerous streaming records. Kygo earned one of his biggest hits with the multiplatinum “It Ain’t Me” (feat. Selena Gomez), going Top 10 on the Billboard Hot 100 and clocking over 2.9 billion streams worldwide. In 2019, Kygo unleashed “Higher Love” with Whitney Houston and generated another 1.4 billion combined streams/views worldwide and peaked at #1 on Dance Radio in addition to leaving his imprint on a classic. He heralded his 2020 critically acclaimed third full-length album Golden Hour [Sony Music International/Ultra Records/RCA Records] with the anthems “Like It Is” (feat. Zara Larsson & Tyga), “Lose Somebody” (with OneRepublic), and “I’ll Wait” (feat. Sasha Alex Sloan). The album has garnered over 2.5 billion streams worldwide. Following Golden Hour, Kygo released his remix of Tina Turner’s “What’s Love Got To Do With It” and Donna Summer’s “Hot Stuff” to rave reviews.

DNCE initially shook up popular music and culture with the release of their RIAA quintuple-platinum certified single “Cake By The Ocean” back in 2016.  The song permeated pop culture at large, becoming an unstoppable hit, crashing the Top 10 of the Billboard Hot 100, and emerging as “one of the most-played songs of the year at Top 40 radio.” Achieving global consumption of 10 million-plus units and 3.2 billion streams, it went triple platinum in Australia and Sweden, double-platinum in Canada, The UK, New Zealand, Poland, and Spain, and platinum in Belgium, Denmark, France, Germany, Italy, The Netherlands, and Portugal.  The release of their gold-certified self-titled full-length debut album, DNCE [Republic Records], followed, which featured additional hit singles such as the platinum-certified “Toothbrush.” The band closed out 2016 at #8 on the Billboard Top Artists – Duo / Group Chart, #11 on the Radio Songs Chart, and #13 on the Pop Airplay Songs Chart. Meanwhile, they garnered “Best PUSH Artist” at the 2016 MTV European Music Awards and “Best New Artist” at the MTV Video Music Awards. To date, the band has tallied 5 billion global streams and 3.5 million global album equivalents. 2022 marks their momentous return as they team up with Kygo for the unshakable and undeniable anthem “Dancing Feet.” With an inimitable and intoxicating hybrid of rock, pop, dance, and funk like no other, DNCE will make you move more than ever now.