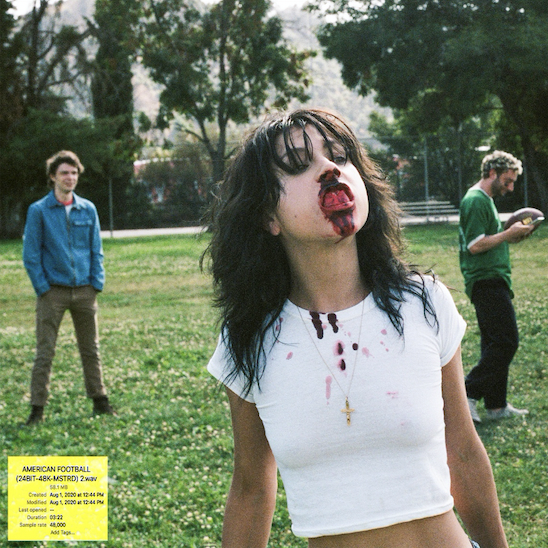 BAND ANNOUNCES CONTEST; ENTER TO WIN A
LIMITED EDITION SIGNED FENDER GUITAR HERE
Pop rock weirdos KITTEN release new single “American Football” today via The Orchard. Listen to the track HERE.
With a massive chorus and linebacker-sized guitar riffs, “American Football” crams the energy of a stadium into a crunchy digital audio file.
In succinct lyrics, KITTEN uses the high-school-quarterback trope to comment on the shortcomings of society at large and examine how hard it is for people and ideas to get out from under the weight of “tradition”. Sons repeat their father’s mistakes. The system dictates the winners. In the euphoria of the mob singalong, we forget to stop and ask ourselves, “What happens when the music stops?”.
American Football harkens back to recent single “What Year Are We In” with its social commentary and laptop-classic-rock sound, with a twist of the pop-punk attitude of fan-favorite tracks like “Me”.
Singer Chloe Chaidez adds, “Everyone on the KITTEN team had their head in the game and gave it their all on ‘American Football’. Dave wrote a killer hook over my guitar chords, and Parker brought it home with some amazing production. If there is ever a rock-n-roll Super Bowl, I think KITTEN will win.”
In addition to the release of “American Football”, KITTEN have also just announced that they have teamed up withTunespeak for a contest where one fan will win a signed Fender limited edition Squire Bullet Telecaster electric guitar. For more details and to enter to win visit Tunespeak’s site, HERE.
Known in large part for their ferocious live shows, KITTEN has done their best to respond to a concert-less era by embracing new social media and leveling up their home-recording game. TikTok proved to be a perfect platform for Chaidez’s kinetic energy, and the time off the road has led to the completion of their long-awaited sophomore record.

If you’ve kept an eye on underground pop for the last half-decade, you’ve probably come across the name KITTEN. After releasing Goodbye Honeymoon Phase last year, with instant fan-favorites like “Memphis” and “Me”, the band made memorable appearances on CHARLI XCX’s NETFLIX show I’m With The Band: Nasty Cherry, and toured the USA with pop-punkers WATERPARKS.  They look forward to returning to the road.