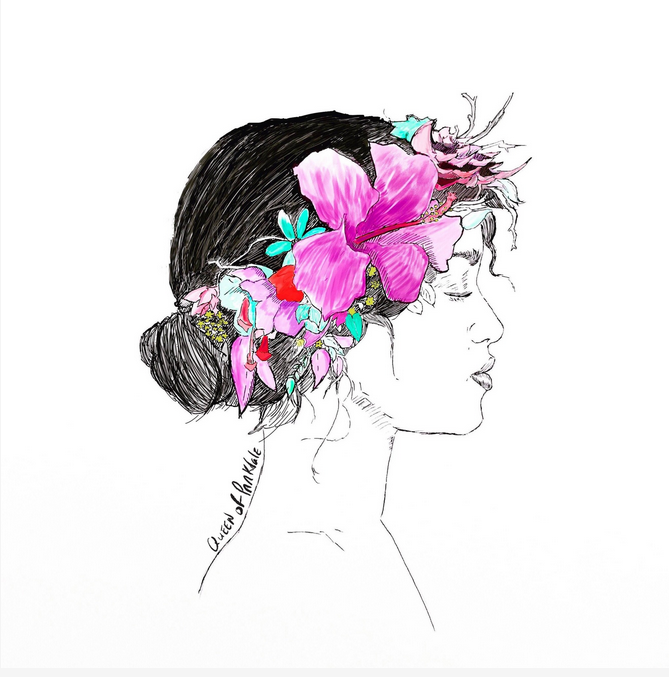 J. Hutton has just released “Queen of Parkdale” today showcasing his beautiful musical talent. Incorporating music and art, Hutton brings something new to the table. Around each single, he helped craft special anecdotes painting a story of the mood and muse in each song. Make sure to check out the different anecdotes behind his latest releases and to be inspired!

Share with us a time that you saw a sign you should pursue music. Where were you? Who was there?

I’ve had a lot of support from some brutally honest people. I was told “that wasn’t too bad” in high school & I guess I really let it get too my head. Honestly, making music is the only thing that’s ever made sense to me & I would lose my mind doing anything else.

Who was your biggest musical influence growing up?

It’s a toss-up between Stevie Wonder and Carlos Santana. I had all the cd’s and I would cue them up everyday on the way to school. I wouldn’t miss a lyric and took every opportunity to hit an air guitar solo. Papa goes hard.

What do you hope people feel when listening/seeing your art?

I hope people feel soothed and relaxed when they hear our music. If I can take the edge off somebody’s day for 3-4 minutes, I feel like I did my job.

From the beginning of your career to now, how do you think you have evolved as an artist?

I think have grown an infinite amount of patience, like a sherpa level of patience, a not caring when “Winds of Winter” will drop level of patience. When I started, I wanted to get things out as soon as possible, but I understand now how much planning and waiting it takes to give a project it’s full potential. I’ve managed to change my impatience to excitement. So that’s neat.

To you, what is a perfect day out?

These days, just getting out of the house to get groceries feels like going to Disneyland. Before quarantine though, going to the movies with a massive cup of coffee was peak level escapism for me. I use it to reward myself for writing. If I finish something I get extra excited because I get to take myself out for a date. It’s a flawless system.

Where do you get your inspiration from?

Personal bribery and re-runs of the Golden Girls for the most part.

What is an artist you admire?

If you could be any animal what would you choose and why?

I’d be an Otter, hands down. You just float around, hold hands and eat mussels. Realistically, I do those things anyway, but it would be nice to not have crippling fears about career decisions.

In what ways do you think art/music can help make a difference in the world?

Nothing brings people together like live music. Either they bond over how good it is or group together to boo Drake off a stage (not that I support that).

A quarter life crisis and a lot of new music.

Nestled in the suburbs of Toronto lies a sleepy triplex building known for its rustic decor. In the heart of the lobby there was a square pink shag carpet which J. Hutton would frequent and eventually come to make his own. He would spend hours there as it served as a meditative tool and a focal point in his daily life. It would grow into a safe space, which could calm his otherwise sardonic and over contemplative nature. Many of J. Hutton’s works were inspired by the meditative state he achieved with that luscious shag. Hutton’s No Complaints used the unusual inspiration to turn a loose idea into a lush ballad made from countless hours spent serenading the homespun walls of his lobby.

Whilst traversing the foothills of eastern Toronto, J. Hutton heard the whispers of a familiar, yet transfixing melody. This haunting sound felt of something distinct and brazen. Standing to watch the sun sink into the trampled lowlands of Riverdale Park Twice was whispered into existence. With determination, Hutton immediately ran to the apartment of his co-conspirator and partner, Losh, stopping for nothing or no one. Children turned to watch in amazement as Hutton fled through the barren Toronto streets. Moments after reaching his destination and recovering from an extensive cardio session, Losh and Hutton would spend the next 14 hours creating the future soul sound of “Twice.”

From a young age, J. Hutton has been a man of vintage taste. He finds catharsis in vintage films, antique upholstered couches, timeless jade dresses and the enduring sound of Ella Fitzgerald. Pink couch is a soothing hymn derived from his vices and appreciation of the past. During an awe inspiring thunderstorm in central Manhattan, J watched as the torrential rainfall poured over the neon soaked windows of the nearby apartment buildings. The pink reflection illuminated through the living room window turning the couch a pinkish hue. J and Losh began creating a soundscape that could rival the bewildering power of that Manhattan deluge.

In the mid-September lowlight, J. Hutton was perched upon his rooftop sipping his fine Arabic coffee. Within the hum of the early morning gridlock, vivacious and harmonic car horns rang in sequence into the ether. J began to sing in-between each horn line, imagining he was Cab Calloway during one of his televised big band performances. As he glided across the tarred rooftop, singing the opening lines of what would become a funky sax laced song. Over the course of a fortnight J. & Losh  (producer partner) would transform the vociferous roar of traffic to the sharp soundscape that is “Old Fashioned”

The sun had set after J. completed an arduous and extensive home yoga session. He is in constant search for a sense of stillness and on that night he felt as though he might have found it. Unfortunately, this feeling was short lived after realizing that he had pushed himself too far and could not lift himself from the floor. Unable to turn out lights, J. laid motionless with a burning desire to be held in a dim setting. In the morning, when he regained use of his body, he stood at the piano and wrote the opening verse of “Take It Easy.”

Hutton and Terrell Morris paired to create a full bodied ballad for those seeking asylum from incandescent environments.

Parkdale is a magnificent safe haven from all things of a remarkable standard.  In a dive bar west of Jameson Avenue. J. Hutton soaked in the neon brightly lit atmosphere. As the bar band caroused in the backroom, in walked the golden haired wonder—a Queen. A once derelict drinkery, transformed before J’s very eyes. The now glowing magenta overtones followed her as the transients made way. It is safe to assume that he was transfixed by her indefectible presence. The air seemed to thicken with the step he took towards her. His introduction was stammered and hesitant, but seemingly unfazed by his timid nature, she introduced herself. Her name was Georgia.

The records’ nostalgic sound is inspired by J and Losh’s deep appreciation of old soul music. Queen of Parkdale is ballad dedicated to the uncut beauty of the rustic Toronto neighborhood.