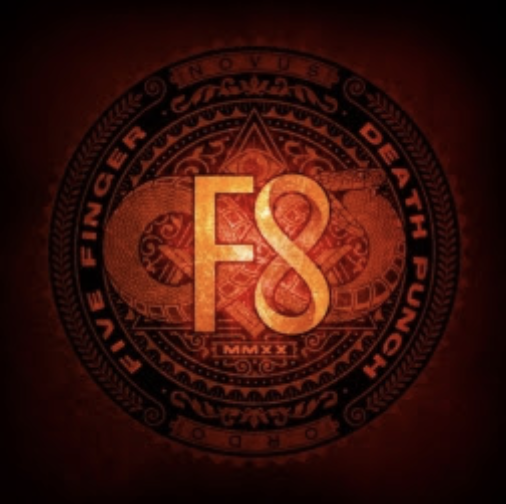 Record-breaking rock juggernaut Five Finger Death Punch have released their eighth album, “F8”. The album debuted at #1 on the Rock Charts Worldwide and in the Top 10 of the Mainstream charts in the US, Austria, Australia, Canada, Finland, Germany, Sweden, Switzerland, the UK and more.

Five Finger Death Punch has become one of the most recognizable names in music, selling over a million concert tickets in the past two years. Every record since the release of the band’s 2007 debut album The Way of the Fist has been certified Gold or Platinum by the RIAA. Currently, the band is nominated for Best Rock Song and Best Rock Artist at this year’s iHeartRadio Music Awards.

The new album includes the band’s #1 single “Inside Out”, as well as instant grat tracks “Full Circle” and “Living The Dream.” The standout track for press and fans alike since release has been “A Little Bit Off,” with charts in the US, Canada and Germany highlighting the song with #1 debuts.

Five Finger Death Punch will kick off the next leg of its U.S. Arena tour in April 2020 and will bring along special guests Papa Roach, I Prevail, as well as highly acclaimed newcomer Ice Nine Kills. All tour dates can be found here.