ON: January 6, 2021 BY: Alexandra Bonnet OBSESSIONS 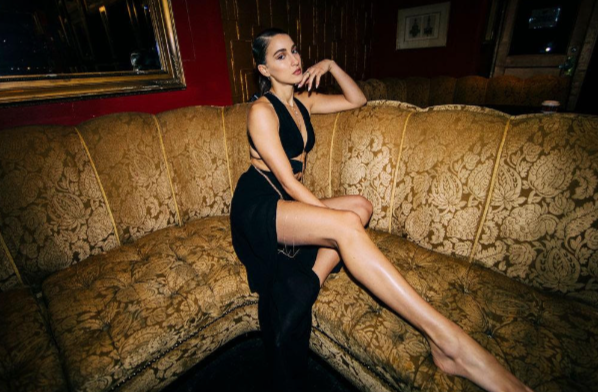 Get ready for a real treat – rising pop singer Evangelia has just released a live performance video of her current hit single,“Fotiá”.

Filmed at The Belasco in Los Angeles, the new video showcases the Greek American singer-songwriter – along with co-writer/co-producer Stolar (Aloe Blacc, Selena Gomez), playing a stripped-down take of the original euphoric and electrifying dance-pop song, with a bouzouki and a pair of dancers.

The song, which is available in the United States via Epic Records and internationally represented by Columbia Records, has accumulated nearly 300,000 total global streams and well over 350,000 views on its official music video.

“Performing in a venue was not something I thought I’d have the opportunity to do in 2020, so being able to put together this live show weaving in aspects of my Greek culture was a dream come true,” shares Evangelia. “It was also my first time having dancers on stage with me, which is an aspect of live performance that I’ve been wanting to incorporate for a long time. I can’t wait to do this again with a real live audience in the theater (haha) – hopefully sooner than later!”

Watch the video below.

Evangelia grew up both in New Jersey and Greece, where she spent nearly every summer of her life on her grandmother’s farm on the Greek island of Crete and became enamored with Greek folk music. While working full-time as a Special Education teacher, Evangelia spent her nights in various New York City recording studios – quickly building a reputation as one of the most exciting newcomers to look out for on the music scene. When she was laid off from her teaching position, she took a leap of faith to pursue her lifelong dream of being an artist. Now based in Los Angeles and signed to Sony Music International, Evangelia has arrived to brighten the pop landscape with a boldly original sound built on her endlessly magnetic presence. Look for more music from this must-watch talent in early 2021!