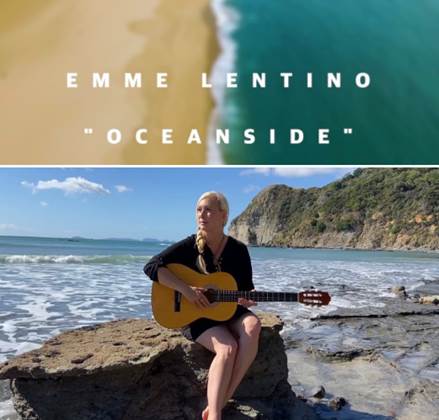 Today, famed singer Emme Lentino releases music video for her breakout single “Oceanside!” The highly anticipated single is an impassioned soundtrack to our trying times, a panacea of escapism with a palpable heart and soul.

Many scenes from this music video are Emme’s own home videos, reminding her of happy times at the beach with friends and family. With a voice comfortably sitting between Stevie Nicks and Norah Jones, Emme has established a global presence and loyal fan base. Following the shock passing of her beloved husband after a battle with cancer, it was music and family that became her protected sanctuary. Emme’s focus was devoted to raising her two young children and to singing, which truly surfaced the healing powers of music and her purpose as an artist

The new track “Oceanside” highlights the exquisite vocal style of this American-born New Zealand music artist and her ability to write searing, emotionally affecting contemporary songs that perfectly balance elements of pop and chilled-out soul. With its spellbinding chorus hook and laid-back, breezy groove, “Oceanside” is a super-immersive hit; a dreamy invocation to the delights of memory and place, harnessing all the expressive elements of Emme’s poignant performance and blending it with a seductive, modern musical edge. The singer-songwriter, musician, and actress, has gone from strength to strength with every release, continuing to reaffirm her global presence and a loyal, burgeoning fanbase