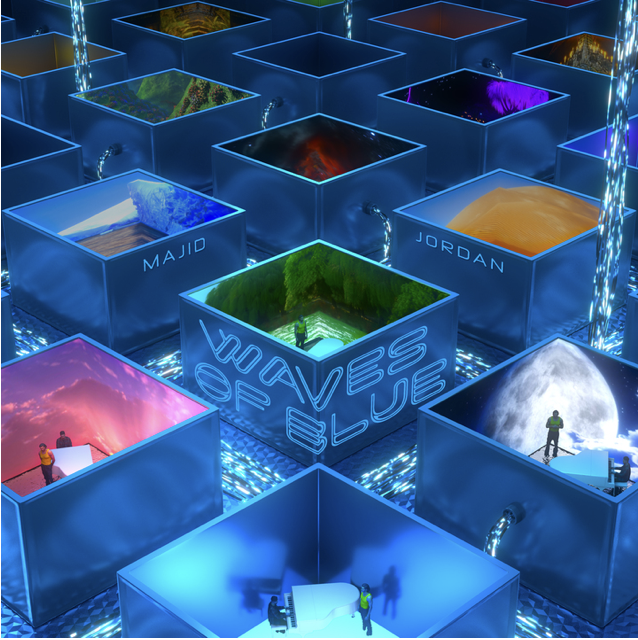 AJID JORDAN RETURN WITH GLEAMING NEW SONG AND VISUAL “WAVES OF BLUE” ON OVO SOUND
WATCH HERE – LISTEN HERE
Acclaimed singer/producer duo Majid Jordan (Majid Al Maskati and Jordan Ullman) have returned with a gleaming new track and stunning audio/visual release titled “Waves of Blue” on OVO Sound. With “Waves of Blue,” the duo unlock a brilliant, creative extension of their sonic universe where pop, r&b, and dance music collide. With anticipation mounting since their last track “Caught Up” ft. Khaled in 2019, and as the Toronto natives have been hard at work recording, 2021 is shaping up to be a spirited new beginning for Majid Jordan and their fans in more ways than one. The group explains about “Waves of Blue”:
Waves of Blue is like staring at the ocean. You’re not in the water, but you’re still getting carried away by its currents. It’s the story of someone’s desire to love and be lost in that love. Waves of Blue was made at the very beginning of this album, and it only makes sense that we begin our next chapter with this song.
It represents the onset of a bold, mature transformation in sound and scope. In the visual, Majid is front-and-center, and Jordan sits at an elegant white piano as vibrant colors and cosmos orbit the duo in an augmented-reality dreamscape. It’s the perfect re-introduction to their captivating world. Stay tuned.
ABOUT MAJID JORDAN:
Majid Jordan season is upon us. Visionary duo Majid Jordan (singer Majid Al-Maskati and producer Jordan Ullman) has been a go-to for R&B/Dance playlist aficionados, and they’re back, ready to explode onto the global pop scene. The release of their 2013 debut EP ‘Afterhours’ turned heads: their seamless, sensuous blend of honest R&B, pop, and dance catching the attention of OVO Sound’s Noah “40” Shebib. After co-producing and writing Drake’s 2013 6x-platinum smash “Hold On We’re Going Home” Majid Jordan’s sound catapulted into the mainstream. Signing to OVO Sound in 2013, Majid Jordan doubled down on their signature sound, releasing their first official EP, ‘A Place Like This’ in 2014, and the eponymous, full-length version in 2016. Majid Jordan’s most sonically dynamic album yet, ‘The Space Between’, came in 2017 featuring contributions from PARTYNEXTDOOR and dvsn. Acclaimed by critics and listeners alike, Majid and Jordan embarked on a year-long world tour and successful festival run before releasing “Caught Up” ft. Khalid in 2019. Since their last release, the duo have been consumed in developing their sound. Deconstructing. Inventing. Expanding. More confident and evolved than ever before, Majid and Jordan are inviting everyone to experience their reimagined and wild universe. Welcome to the next chapter.
FOLLOW MAJID JORDAN:
Twitter | Instagram | YouTube