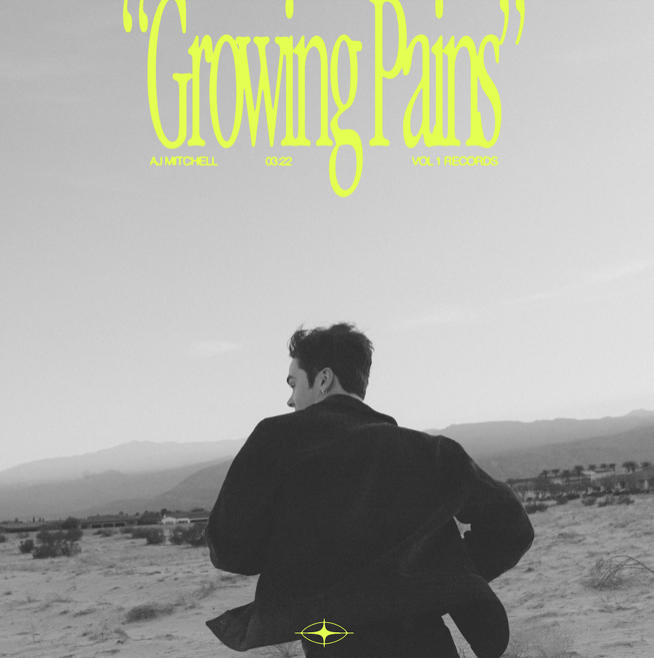 Turning the next page of his captivating multi-dimensional story, gold-certified pop phenom AJ Mitchell unveils a new single entitled “GROWING PAINS” today. Get it HERE via Vol 1./Epic Records. The song is the latest to be revealed from his debut full-length, Skyview, due out this year and executive produced by Mike Dean.

Further exploring Skyview’s coming-of-age themes,  “GROWING PAINS” represents a moment of personal, creative, and spiritual evolution. It follows a thread from the first single “CAMERAS ON” where he becomes disenchanted by the fabricated life in front of the camera and, ultimately, chooses to move on from this synthetic world during its successor “STOP.”

“GROWING PAINS,” which was personally produced by Dean, showcases airy soundscape that underscore a vibrant vocal performance from Mitchell as guitar kicks in. Flipping the tempo, the beat drops into a sizzling R&B groove as his voice fluctuates between intimate verses and fiery falsetto-inflected choruses. Heating up already, “GROWING PAINS” appears in the season 2 premiere of MTV’s The Hills: New Beginnings.

Right out of the gate, “STOP” amassed over 1 million streams. It just crashed the Top 40 at Pop Radio where it continues to ascend. Be on the lookout for the premiere of the official music video for “STOP,”  coming soon.

With all of the songs releases from Skyview thus far, we’ve seen AJ Mitchell truly coming into his own, showcasing his knack for great storytelling.

Since emerging in 2018, AJ Mitchell has consistently asserted himself as pop’s most dynamic new leading man. Averaging over 7 million monthly listeners on Spotify, he impressively leaped past the 1-billion stream mark within three years. In addition to being named a Vevo LIFT artist and MTV Push artist, Variety championed him on its “Young Hollywood” 2020 list. Beyond acclaim from Billboard, Idolator, Highsnobiety, and Seventeen, he delivered show-stopping performances at the MTV VMAs and on The Today Show and Good Day New York. In 2019, his Slow Dance EP yielded the gold-selling title track “Slow Dance” [feat. Ava Max]. Including the latter, he has logged four songs on the Top 40 at Pop Radio thus far. He’s also become  a trusted collaborator, recently joining forces with Cheat Codes for “Hate You + Love You.” Throughout 2020 he also collaborated with names like Elle Henderson, Steve Aoki, Captain Cuts, and more. Over the past year, he assembled his full-length debut Skyview with the legendary Mike Dean as Executive Producer. Now, the cameras are on, and AJ Mitchell is ready to shine in 2021.